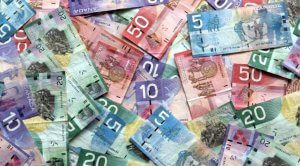 Will Ottawa borrowing $100 million more produce more benefits than leaving the money with Canadians to spend? writes William Watson in the Financial Post. Below is an exerpt from the article, which can be read in full here.

One followed by 12 zeroes. A trillion. Or, if you like, a thousand billion. Or, the one I find most impressive, a million million.

We used to talk billions in fiscal policy. Now, increasingly, we talk trillions. U.S. President Joe Biden’s proposed COVID package is US$1.9 trillion ($2.4 trillion), though the Wall Street Journal argues only a measly US$825 billion is even remotely related to COVID, the rest being progressive visioning made flesh.

Canada’s federal debt now exceeds $1 trillion, though only in Canadian dollars. If you want to watch it grow, the Canadian Taxpayers Federation has a real-time debt clock. As of this writing it’s at $1,063,743,57… oops, the rest is moving too fast for me to actually see, let alone copy down. Just watching the numbers spin induces headache. You can imagine how much the heads hurt of the people who have to figure out ways to finance it. Only 100 years ago, not a million, federal budgets listed expenditures down to the penny (a defunct coin). Now, entries as far out as the millions of dollars probably aren’t significant digits.

Imagine: a million million! It used to be a million was a very big number. When I was a kid there was a non-reality (i.e., pure fiction) TV show called “The Millionaire.” A lawyer went around delivering $1-million cheques from a never-seen eccentric who wanted to learn how instant wealth affected people’s lives. If you were in a receiving line, like a prime minister or governor general, and you took 10 seconds shaking the hand of every person you met, greeting a million people would take you almost four months, working 24/7. Though your hand wouldn’t hold up.