5G and data: Protecting the strategic resource of the 21st century - Robert Spalding's Speech at the MLI Annual Dinner 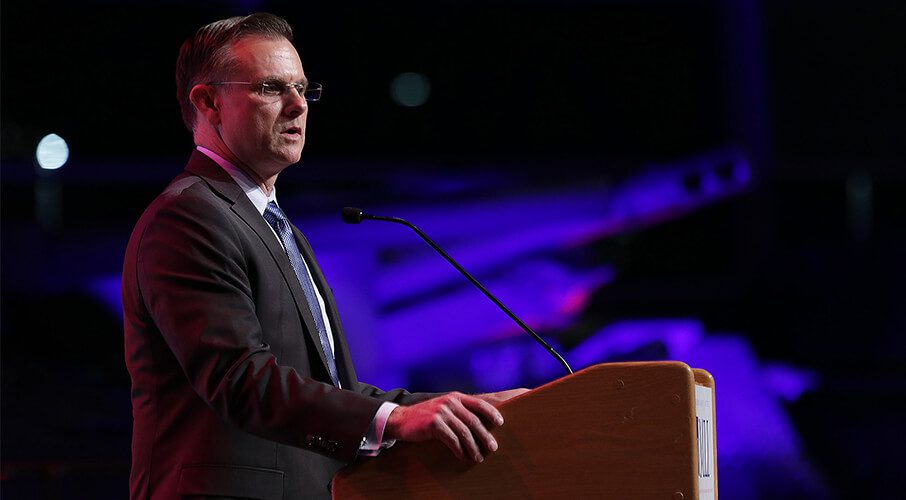 We need to wake up and focus on preserving the democratic principles that we’ve grown to know and love, explains Robert Spalding.

This article is based on Dr. Spalding's talk delivered at MLI’s annual dinner on February 19, 2020

So, in 2017 December, the US released a national security strategy (NSS).  That strategy was actually begun – the work on it was begun – in the summer of 2014. And, for the almost four years that we worked on the strategy, we tried to imagine how we would take what we’ve build since the end of the World War II into a digitized future.

So, in the Canadian War Museum, it’s actually quite interesting that we’re here surrounded by the tools of national defence in the 20th century, while at the same time being surrounded by the strategic resource, as we say in the NSS, of the 21st century. What am I talking about here?  Data.  Why is data so important?  If you listen to Kai-fu Lee, who is China’s leading artificial intelligence (AI) thought leader, he says that China is to data what Saudi Arabi is to oil.

Now why should that matter to us?  In 2007, when Steve Jobs designed the iPhone, Microsoft CEO Steve Ballmer’s response was, “Who’s gonna buy the $500.00 subsidized device?” And the answer was, “everybody.”  At the time, if you looked at the top five in market capitalization, it was Microsoft, AT&T, General Electric, ExxonMobil and Shell.  In 10 years, the synergy between smart phones and 4G networks created a global economic transformation.  In 2018, the top five were Facebook, Amazon, Apple, Netflix, Google (and Microsoft still made it), representing 15 percent of the S&P total evaluation.

Why?  Well, while that was going on, four companies in the United States, AT&T, T-Mobile, Sprint and Verizon were building 4G networks.  They spent a total of US$250 billion, and today, they still haven’t paid off those investments.  Why?  Because the FAANGs (Facebook, Amazon, Apple, Netflix and Google) came over the top and took all the value out of the system.

So, in the NSS when we say the strategic resource of the 21st century is data, we’re talking about how data has fundamentally transformed the global economy – and not just the global economy. It has given the power to foreign nations to influence our democratic principles right down to the individual level.  So, in 2016, four days after our election, we had a protest in New York City; anywhere from 15-25,000 people marched right up to Trump Tower on behalf of an organization on Facebook called Black Lives Matter. Except it wasn’t an organization called Black Lives Matter, it was the Russians using artificial intelligence bots, social media networks, and big data analysis. The Russians created a protest right on the streets of an American city.

Now, I flew for almost 27 years in what I would consider the most incredible technological weapon system in world, the B2, and I felt I could go anywhere and drop a bomb anywhere. But what we didn’t realize – and what we saw in the summer of 2014 – was the fact that when we had been spending US$800 billion building this massive war machine, the ability to undermine our own society was being created by our own corporate system.

Now, why is that important to us here?  Well, because we all value civil liberties, rule of law, self-determination, and free trade.  It’s actually outlined in the Atlantic Charter, a document that was signed collectively by Winston Churchill and FDR in August of 1941.  It really laid out the template for the international order that we think exists today.

Yet in the summer of 2017, the EU voted for the first time not to sanction China for human rights violations at the UN.  Why?  Because Greece and Hungary abstained.  So, what we saw in the NSS was how not only data, but economics, finance and trade were all crucial to how geopolitics run in the 21st century. While we have lost the ability to move international institutions like the UN and WTO, a Chinese regime that essentially repudiates democratic principles, free trade, rule of law, and self-determination had essentially acquired the ability using the tools of globalization, including the Internet, to move those systems in their favour to our own detriment. They had also acquired through our tools and through our business models the ability to influence our own societies.

So what do we face going forward?  In building this system, you can open an App on your phone and get a car to come out here to the museum, pick you up and take you home.  That’s the 4G world.  What is the 5G world?  Well, if you’ve lived in China recently, you’ve seen elements of it. You open an app called WeChat, you go into a restaurant, a camera recognizes your face and the server hands you your food and greets you by name.  That’s the beginnings of what is going to be a 5G world.

And what is a 5G world?  It’s a world where the smartphone goes away and it’s built into the city around you.  So, rather than opening an app on your smartphone, you walk outside the door and say Uber, a camera sees your face, does facial recognition, reads your lips and a car speeds you on your way, most likely without a driver.  Why is that important?  Who owns the data?

We’re very focused on Huawei, but we’re not focused on what is carried on that network – and that is the data. Why is it so important? I encourage you to read Engineering Global Consent, a report put out by the Australian Strategic Policy Institute by ASPI researcher Samantha Hoffman, that talks about Global Tone Communication Technology Corporation, a big data and AI company in China, which does language translation in 65 languages.  This company collects 2 to 3 petabytes of data per year.  One petabyte of data is 1000 terabytes and it uses that through machine learning to provide translation services to its customers.  Its products are built, and its technologies are built into Huawei products.

Today, we allow the corporate sector to drive these tools and these business models into our lives without really understanding the implications or really knowing how to implement policy that creates a better future for our children and our grandchildren.

That’s what’s at stake and if we don’t wake up and focus on preserving the democratic principles that we’ve grown to know and love, we will be a victim of our own success.  Thank you.

Dr. Robert Spalding, Brig Gen (Ret’d), USAF, is a senior fellow at Hudson Institute. He was Senior Director for Strategy to the President at the National Security Council in the United States.

In 2017, Canada took up a leadership role as the Framework Nation of NATO’s Enhanced Forward Presence (EFP) Battlegroup in Latvia. And, immediately...