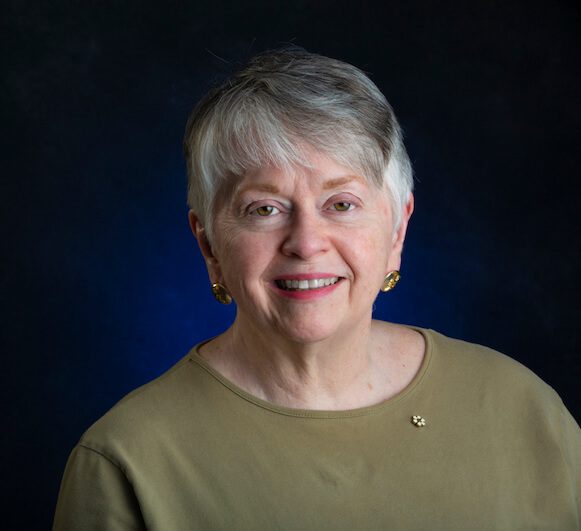 Born in Kansas and immigrating as a young woman to Canada in 1968, Dr. Scott’s first career was in journalism.  She served as City Editor of The Columbian Newspapers in suburban Vancouver, and as Senior Editor of the Vancouver Bureau of the Canadian Press.  In 1972, she was awarded one of the highest honours in that profession, the Toronto Men’s Press Club Award for Editorial Writing, the first woman and the youngest person to receive that award.

She has also been active over many years as a consultant, operating her own management and public relations firm in each of the four provinces in which she has lived.  She has also consulted extensively in communities as a volunteer, most recently in Iona and in the Margaree Valley of Cape Breton.

But Dr. Scott is best known as a visionary educational, community and national leader.  She served on faculty at the University of Manitoba, and was Director of the School of Continuing Studies at the University of Toronto, prior to her appointment at the University College of Cape Breton (now Cape Breton University).  During nearly 10 years as President & Vice-Chancellor at UCCB, the institution added 23 new academic programs, while suspending 12, and repositioning the institution for the future.  Some 16 new academic and applied research institutes were established, most directed toward sectoral economic development changes in Cape Breton and Atlantic Canada.  More than $35 million was raised and invested in much-needed maintenance on the original campus buildings and in expanding the built campus by more than 50 per cent, and increasing its land base ten-fold.  Given Cape Breton’s demographics, she led efforts to attract international students, and to found UCCB’s partner institution in Cairo, Egypt.  UCCB also led all other Canadian universities in establishing transfer agreements with community colleges regionally and nationally.  During her tenure, Dr. Scott and her family endowed the Orpha Scott Thayer Award.  The $2,500 annual award, for a student in a degree program leading to a Bachelor of Education Degree, is in memory of Dr. Scott’s mother.

Nationally, she served 10 years on the Prime Minister’s Advisory Council on Science and Technology, three years as Deputy Chair, its senior leadership position. Later, she served on its successor advisory body to the federal Cabinet, the Science, Technology and Innovation Council of Canada. She served on the Board of Innovacorp (Nova Scotia’s Crown agency for startups) for 16 years, and 7 years as its Chair and a year as its Acting CEO.  She also served terms as Chair of the Canadian Advanced Network for Research, Industry and Education (CANARIE); the Canadian Alliance of Education and Training Organizations (CAETO); the federal government’s Expert Panel on Skills, the 21st Century Learning Initiative, and the Canadian Association for University Continuing Education (CAUCE).  She co-chaired the Advisory Committee for the Satellite Account on Nonprofit Organizations and Volunteering for Statistics Canada for several years.   For 7 years, she was Vice-Chair of the MacDonald-Laurier Institute, one of Canada’s most internationally well-known and honoured public policy institutes. In addition, she served on the Boards of the Association of Canadian Universities and Colleges (AUCC), the Association of Atlantic Universities (AAU), the Canadian Centre for Management Development, the Corporate-Higher Education Forum, Sempra Atlantic Gas, Sydney Steel Corporation, CDI Education Corporation, Nexient Learning Inc., the Yorkville University Board of Governors (also serving as its Vice-Chair), Dynagen Technologies, HIPPY Canada (Mothers Matter Centre) and the Canadian International Demining Corps.  She was for two terms a federal Corporate Member of the Millennium Scholarship Foundation.  She was also a member of the international advisory board for the World Education Market.

Locally and regionally, she was a Board member of both the Celtic Colours Festival Society (15 years, and Chair for 5+ years), and the Cape Breton Regional Hospital Foundation (2010-2012).  She served 7 years on the board of the Atlantic Institute for Market Studies (AIMS) and, for several years, was Chair of Atlantic University Sport (AUS).  She also co-chaired (with George Unsworth) the first PGI Golf Tournament for Literacy held on Cape Breton Island, and was a board member of the Cape Breton County Economic Development Authority.

As an expert on skills issues, innovation and development policy and nonprofit organizations, Dr. Scott was a member of Government of Canada delegations to the Heads of State meeting of “Third Way” countries, and to the Asia Pacific Economic Council High-Level Meeting on Human Skills Development.  She has been much sought-after as a speaker and writer on national and international issues relating to skills and learning, science and innovation, and regional economic development.

Dr. Scott was awarded an honourary Doctor of Laws by the University of Waterloo, and an Honourary Diploma from Loyalist College (ON), for her contributions to higher education, and was an Honourary Life Member of CAUCE, the Ontario Council for University Lifelong Learning (OCULL), and CAETO.  In 2017, the University of Cienfuegos in Cuba conferred on her an honourary distinction for her work in internationalizing that University and her role in community economic development projects in the provinces of Guantanamo and Cienfuegos.

In 1998, the Progress Club of Halifax-Dartmouth named her “Woman of Excellence” of the year for Corporate Management and the Professions, and she also received the Peter Gzowski Award for Literacy (Nova Scotia).  In 2001, she was awarded the Lieutenant-Governor’s Medal for Excellence in Public Administration and was appointed an Officer of the Order of Canada.  In 2002, she was awarded the Queen’s Golden Jubilee Medal for civic service and, in 2012, the Queen’s Diamond Jubilee Medal.

She retired from Cape Breton University at the end of 2017, and in 2019 was appointed Chief Operations Officer for Airesun Global Limited, a cleantech firm developing and manufacturing plant-seed-based lubricants and de-greasers for heavy industry.