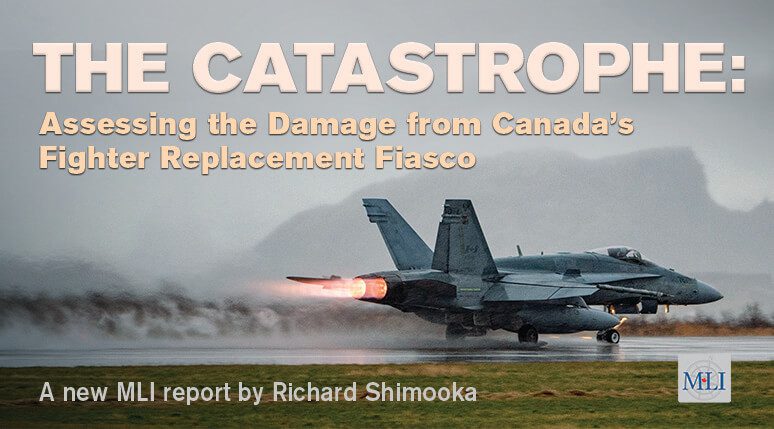 OTTAWA, ON (May 6, 2019):  In a hard-hitting new Macdonald-Laurier Institute report, MLI Senior Fellow Richard Shimooka takes a critical look at the government’s approach to replacing Canada’s aging fleet of CF-18 fighters.  In the report, titled The Catastrophe: Assessing the Damage from Canada’s Fighter Replacement Fiasco, he argues that Ottawa’s performance on this file mirrors the SNC-Lavalin Scandal and the Mark Norman Affair.

“At their heart, these two incidents represent attempts by the Liberal government to circumvent established processes to meet their partisan interests,” Shimooka explains. “This description is just as apt for the fighter program.”

Canada is a participant in the Joint Strike Fighter (JSF) Program that has been developing the F-35s. These fighter jets were slotted to replace the RCAF’s aging CF-18s, but after the program was mired in political scandal under the previous government, the Liberal government changed plans.

“During the 2015 election campaign, the Liberal Party promised not to buy the F-35 jets, but instead to use a competition to identify and subsequently purchase a lower-cost competitor… this decision proved to be impossible, unethical, and potentially illegal,” writes Shimooka.

From billions of dollars being wasted on a procurement process to fix a contrived capability gap to potentially threatening Canada’s defence relationship with the US, the report finds that political interests have consistently been put above Canada’s defence needs.

Shimooka argues that “the decisions made [regarding fighter jet replacement] were purely for reasons of political interest: not a single one could be claimed as being in the country’s national interest.”

The “fiasco,” as Shimooka describes it, has caught the attention of both Canada’s Office of the Auditor General (OAG) and senior US officials. According to documents never before seen by the public, the OAG had specifically cautioned the government against its chosen course of purchasing Australian Hornets as an interim measure in a draft report – and the final OAG report was heavily revised to obscure that recommendation.

Worse still, letters from US officials reveal that “resentment and distrust towards the government of Canada had grown, particularly within the US Air Force.” These letters, which again have not been made public until now, outline the significant strategic and economic benefits that have already been accrued from being part of the JSF Program. Yet they also contain an implicit (but clear) threat that Canada could be kicked out of the Program – if Ottawa continues with its current policy of trying to obtain guaranteed industrial benefits that, by their very nature, are not allowed under the JSF Program.

“There was a complete lack of logic of Canada’s policy, which seemed to ignore basic facts about membership in the JSF program, including clear advantages in cost and capability that the F-35 provided.”

Despite these persistent, high-level issues with the government’s chosen approach on the fighter jet replacement, the file has avoided serious public scrutiny. Shimooka finds that this happened in large part due to the successful gag orders levelled by the government.

“The government has also suppressed negative viewpoints within and outside the Department of National Defence, allegedly up to and including the deletion of portions of Memos to Cabinet that highlighted why certain decisions should not be taken.”

Moving forward on the file may prove to be difficult; defence procurement woes have plagued Canada since Confederation, and the issues with the fighter jet replacement are deeper than just purchasing the right aircraft. Worse still, Shimooka says that the brunt of the burden of consistently poor decision-making in Ottawa will be borne by the RCAF itself.

“While the negative consequences are clear for Canada as a whole," Shimooka explains, "no community has felt the impact more than the RCAF. As a result of this government’s policies, its ability to conduct its most basic function, the defence of Canadian sovereignty and that of our allies, is diminishing rapidly.”

“It is a sad state of affairs.”