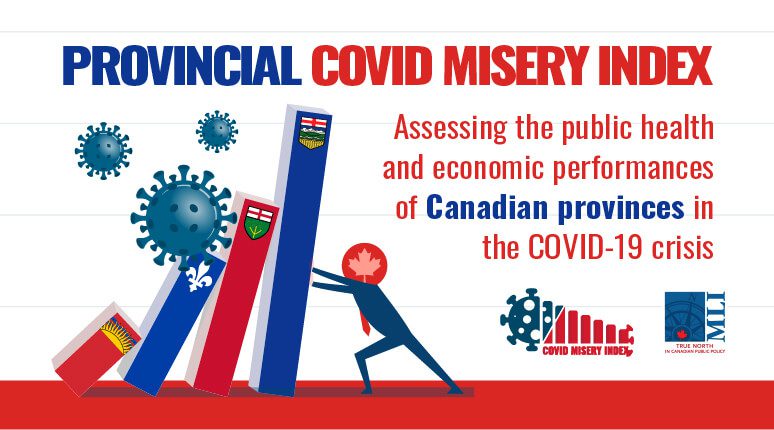 OTTAWA, ON (May 25, 2021): What can we learn from Canadian provinces’ different COVID experiences? 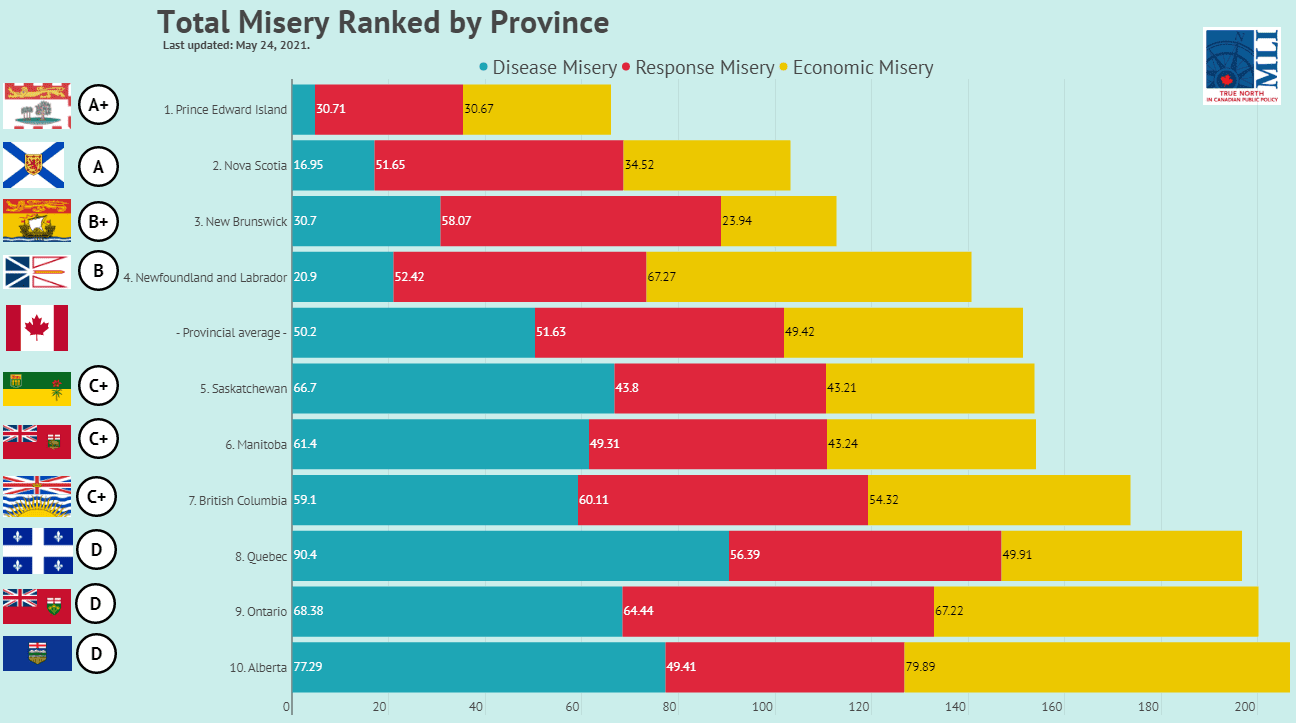 Click the image to see the Provincial Misery Index Rankings.

These are just some of the conclusions reached in the first edition of the Macdonald-Laurier Institute’s new Provincial COVID Misery Index (PCMI), released today. The PCMI is a robust new tool to measure the burden that COVID has placed on Canadians and the effectiveness of their governments’ response.  According to MLI’s data and analysis, Atlantic Canadian provinces stand well above their provincial peers, while Alberta ranks last among all 10 provinces for its handling of the pandemic.

The Provincial COVID Misery Index results show the significant role played by geography in pandemic management. The struggles of larger provinces mirror the experience of larger, more populous, more connected countries in our global comparison, with smaller, more easily isolated countries faring better. This shows that at this stage in the pandemic, a “lockdown to zero” strategy advocated by some health experts is all but certainly futile.

“Lockdowns were originally pitched to Canadians as a magic bullet,” argues MLI senior fellow Richard Audas, the designer of the Provincial COVID Misery Index. “Unfortunately, while the disease itself is predictable, human behaviour is not.”

Audas adds that earlier and more decisive moves to respond to the pandemic at the federal level by restricting international travel would have had greater effect. As the Atlantic Provinces demonstrated, early, well executed measures produced better results.

When considering Disease Misery, Quebec is by far the worst of all the provinces on this measure, languishing under high caseloads, high COVID-19 deaths, and high excess deaths – and this dismal record is only partially mitigated by recent lower case counts.

Of particular concern is the severe conditions faced by long-term care residents in Ontario and Quebec, especially early in the pandemic. As MLI Senior Fellow Dr. Shawn Whatley has written, “COVID-19 has poked the final hole in long-term care’s already leaky boat”, with tragic results.

In terms of Response Misery, Prince Edward Island again is ranked first with the lowest misery score, with Saskatchewan taking second place. By contrast, Ontario’s extremely strict lockdowns secure it last place on the Response Misery measure due to the suffering imposed by many days under stay-at-home orders, shuttered businesses and children stuck at home trying to learn online. Toronto’s status as the most locked down jurisdiction in North America is emblematic of this failure.

It is important to note that vaccination rates (the more vaccinations per capita the less Response Misery) have been quite good across the country, aside from Atlantic Canada where the urgency is less, which strongly contradicts a popular narrative that certain provinces were at fault for slow national vaccination rates, rather than federal procurement.

With Economic Misery, New Brunswick has fared best, managing to stave off a major impact to GDP during 2020 and keeping its increase in unemployment modest. By contrast, Alberta has had by far the worst economic performance overall, suffering a major GDP and employment hit in 2020, incurring significant public debt, and failing to turn around its employment prospects in 2021. As MLI Senior Fellow Ken Coates has argued, we need to “stop the self-harm” done to one of the major drivers of Canadian prosperity and unshackle the energy sector, for the benefit of Albertans and the rest of Canada.

Lockdowns have hit the economies of Ontario and Quebec hard as well. “Interestingly four of Canada’s wealthier provinces have experienced the worst misery,” concludes Audas.