Beijing and Moscow Don't Need to Make a New Sphere – It Already Exists: Matthew Neapole for Inside Policy 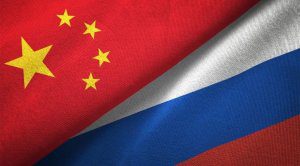 If policy-makers are truly concerned about the increasing alignment between Moscow and Beijing, they ought to be giving closer scrutiny to the Shanghai Cooperation Organization, writes Matthew Neapole.

Western commentators and think tanks have been increasingly focused on the “drawing together” of Beijing and Moscow, and their possible formation as a bloc. While assessments about a China-Russia rapprochement are undoubtedly correct, it would be useful to also consider the convergence of the two powers, and others, through the Shanghai Cooperation Organization (SCO), and the strengthening of authoritarian activity in the region through its mechanisms.

This article will highlight the SCO’s activities on membership coordination, economic measures, and ideology. The SCO includes China, Russia, Kyrgyzstan, Kazakhstan, Uzbekistan, Tajikistan, Pakistan, and India, in addition to a host of observers and dialogue partners, not to mention the UN as a common partner. It covers roughly 60 percent of the Eurasian landmass, roughly half of the world's population, a quarter of the world's GDP, and four of the world's nuclear powers. If policy-makers are truly concerned about the closer alignment between China and Russia, then they ought to also take the SCO more seriously.

Beijing and Moscow have overseen the SCO’s role in facilitating coordinated activity among its members. First, the SCO helps coordinate a shared vision through its annual summits, where the leaders all congregate in one of the host countries and publish a SCO Declaration. These Declarations have mimicked Russia-China Declarations, such as the 2001 Treaty on Good Neighbourliness, or the focus on the Beijing-inspired “Three Evils” of Terrorism, Separatism, and Extremism. However, the connections have deepened in other ways as well, including industry, health and defence.

In some ways, the SCO actually displays better coordination in combatting COVID-19 than other regional organizations like the Organization for Security and Co-operation in Europe (OSCE), such as through meetings between health ministers and the actual provision of medical devices, not to mention projecting appearances of efficacy in the face of perceived Western inadequacy. This coordination is possibly thanks in part to recognition of the danger that epidemics pose in the 2018 Statement for Joint Efforts Against the Threat of Epidemics in the SCO space.

Second, the SCO demonstrates coordination through solidarity in the UN. As research by ETH Zurich demonstrates, the SCO membership actually evinces quite similar voting patterns within the UN General Assembly (UNGA); the SCO itself has been an Observer in the UN since 2004. In comparison to the EU, which is often touted as unified, the SCO Members' votes are aligned together or non-contradictory in roughly the same pattern – 84 percent .  In fact, there is a 2004 SCO resolution which helps to coordinate the members' actions during UNGA meetings.

The SCO enjoys frequent and regular meetings between high-level officials and makes efforts to ensure that their interests are not compromised in international forums such as the UN, which suggests a greater level of cooperation, led by Moscow and Beijing, than is often given credit.

The SCO also demonstrates viable economic clout. In fact, the SCO is in some ways more an economics focused forum, with significant norm-shaping and security elements, than the reverse. There are numerous, evolutionary economic initiatives that the SCO has pioneered over the years. In lockstep with Russian and Chinese goals, the SCO has begun moves to popularize payments in national currencies through its “Interbank Consortium”. Flexibility in credit and currency frees SCO members from this avenue of coercion from outsiders, and especially from the United States, which significantly limits the power of Western sanctions.

In 2016, the SCO began to make the Belt and Road Initiative (BRI) a staple of its annual summits. Demonstrating the flexibility of the organization, India has notably not officially endorsed the BRI in the SCO Summits, and yet still plays an active role in the SCO’s economic events and conferences. Outsiders, too, have begun to connect the SCO with economic factors such as the BRI, such as then Singaporean Trade and Industry Minister Chan Chun Sing's visit to the SCO Headquarters when discussing the BRI. The Pakistani Foreign Minister, Shah Mahmood Qureshi, also recently made this direct connection.

President Vladimir Putin has even stated his support for merging the Moscow-led Eurasian Economic Union and the SCO in 2017. This initiative advanced in the SCO's trademark evolutionary, consensus-based pattern, and surfaced again in the SCO Summit in 2020, with calls to create a “Greater Eurasian Partnership” that was open to ASEAN as well. What all of these initiatives have in common is a drive to create an economically viable pole, as independent as possible from outside manipulation or coercion.

Vision and Sphere of Influence

Policy convergence through the SCO can also be seen in the shared vision of its members. Just as the G7, or recent proposals for a “Democracy 10,” are underpinned by the ideals of democracy and free markets, the SCO member states seem to support a differing vision. Specifically, the 'Shanghai Spirit' is officially touted in the SCO as one devoted to "internal policy based on the principles of mutual trust, mutual benefit, equality, mutual consultations, respect for cultural diversity, and a desire for common development, while its external policy is conducted in accordance with the principles of non-alignment, non-targeting any third country, and openness."

Put another way, this vision opposes interventionism within the SCO sphere, particularly from those outside of it, support of their own internal development, and most importantly, multipolarity in international governance. For example, the SCO’s efforts to advance payments in national currencies in order to shift away from Western dominated institutions would help make multipolarity more viable.

Multipolarity remains the most attractive aspect of the SCO. It legitimizes local governments (which, in the SCO, often means authoritarian) by an insistence that there are multiple legitimate forms of national and international governance. By popularizing multipolarity (or, in another flavour of their parlance, 'multicivilizationality'), it delegitimizes any efforts by liberal-democratic countries to interfere within their sphere. If all governance structures are legitimate, then democracies have no right to interfere or grandstand. Furthermore, it is notable that a number of states that seem opposed to the liberal international order seem to be either involved in or interested in a seat at the SCO. Specifically, Belarus (Observer, lobbying to join), Turkey (Observer, lobbying to join) and Iran (Observer, lobbying to join) will likely become full members in the near future.

Turkish President Recep Erdogan has twice voiced interest in joining the organization in 2013 and 2016. Beijing, for its part, has expressed an openness to incorporating NATO members into the SCO, which should be of great interest to military planners as it would potentially complicate Turkey's involvement with NATO. Iran has made numerous entreaties, and officials have recently claimed membership is imminent. Tehran has also received support from SCO members, like Russia, China, and most recently, current SCO Chairman Tajikistan, though Iran's accession is unlikely so long as they are being sanctioned by the UN. Belarus, too, is increasingly interested in the organization, perhaps in part in order to combat what President Putin has called “outside pressure” in reaction to the recent contested election. This falls in line with SCO efforts to combat outside influence. In addition, Belarusian President Alexander Lukashenko is also suggesting coordination between the SCO and the Moscow-led Collective Security Treaty Organization (CSTO) on Afghanistan.

In addition to the Observers listed above, there is a veritable cavalcade of states that are outside the liberal international order and may seek membership in the SCO, such as Egypt, Syria, Azerbaijan, Qatar, Bahrain, and Saudi Arabia, some of whom have shown interest in SCO membership, either as dialogue partners or observers. The fact that the SCO's attractiveness is so marked among these states, and not among liberal democracies, is a strong argument in favour of the SCO’s shared vision. Led by Moscow and Beijing, these largely authoritarian states seem to be converging in the SCO.

India joined the SCO as an Observer in 2005, and as a full member together with Pakistan in 2017. Of course, given its democratic status, some find India’s membership to be a strange fit for the SCO; in some ways, it can be seen as a black sheep within the SCO. Nevertheless, India's membership may not so surprising for a number of reasons. First, it can be seen as simply a continuation of India's longstanding policy of playing multiple angles. Second, New Delhi and Moscow have deep historic ties, so a continuation of engagement with Moscow is understandable. Third, India benefits from the economic exposure offered by SCO membership to the economies of Central Asia. Finally, the SCO's value as a forum for dialogue should not be ruled out. After all, deliberations to ratchet down tensions following the bloody China-India border clash in June 2020 were initiated on the sidelines of a SCO Foreign Ministers meeting in July 2020.

With all of that being said, a genuine interest on the part of India in the SCO's vision cannot be ruled out. It is no secret that New Delhi desires a more prominent place on the world stage and it may view the SCO's drive for multipolarity as being conducive to that goal. India has also spearheaded SCO cultural initiatives, as well as recently passing legislation enabling cooperation among mass media with the other SCO states, which means a de facto broadening and strengthening of SCO tenets. If nothing else, India’s presence could very well simply demonstrate the flexibility of the SCO and its support for varied governance structures.

SCO members have also increased their security activities in the opaque Regional Anti-Terrorist Structure (RATS), which maintains massive databases on suspects across borders for use by security authorities. RATS has also conducted security drills, as well as facilitating operations among member states. This allows SCO members, with support from agreements like the Convention on Combating Extremism, to in effect reach across state-lines and suppress cross-border support for dissent, digital or otherwise, in other SCO states. When combined with the rather broad interpretation that SCO members use when assessing “terrorism, separatism, and extremism,” RATS becomes a very effective tool in pursuit of regime stability in the SCO sphere and support of multipolarity.

Just like the convergence between Russia and China, and others, is not a recent development, the same can be said of the SCO. It continues to develop slowly, but surely. However, while ignorance of its activities during its infancy were understandable, this same blindspot among analysts and policy shapers is becoming an increasingly large liability in properly assessing the alignment of Beijing, Moscow and others. Thanks to its growth in coordinated activity, economic moves, and ideological bent, this is no longer tenable.

The SCO itself has latent potential as a forum and is still evolving and growing. If democracies take concrete actions against certain key members of the SCO, particularly Moscow or Beijing, it could have a strong effect on the development of the SCO. While the organization has many flaws, it has continued to be an increasingly effective tool and demonstration of a strengthened Moscow-Beijing tilted sphere of influence. In assessing the future of the Moscow-Beijing relationship, we need to look at the SCO as a potential guide on its future direction – one that we ignore at our own peril.

Matthew Neapole holds an MA in International Relations from the University of Groningen and is particularly drawn to the dynamic Indo-Pacific, the evolving Japanese security situation, as well as China's strategic policy. His Master's thesis was titled "The Shanghai Cooperation Organization: A New Sphere and a Multipolar Initiative." He lived for nearly a decade in Japan, as well as in the Netherlands and Belgium.