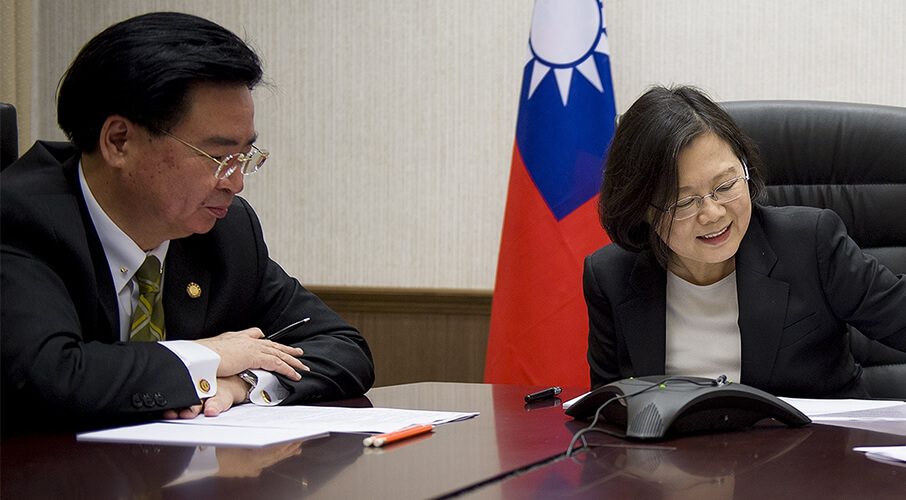 Office of the President, Republic of China (Taiwan) / Flickr

Ottawa and capitals around the world cannot afford to remain silent in the face of such threats by the Chinese regime against officials from another country, writes J. Michael Cole. Speaking up and putting Chinese officials on notice isn’t simple altruism: Taiwan is a canary in the coal mine, and the tactics Beijing uses against it are often a preview of what it will unleash against other countries.

As authoritarian Beijing continues to increase the threat signals against democratic Taiwan, the island-nation’s 23.5 million people have grown accustomed to vitriolic editorials in the Chinese Communist Party (CCP) mouthpiece the Global Times and Twitter posts by its editor in chief, Hu Xijin, calling for war against Taiwan and the decapitation of its leadership.

The Taiwanese have, rightly, shrugged off such posturing, although one wonders why Twitter has yet to shut down an account that has repeatedly violated rules against incitement to violence – in this instance on a mass scale.

However, things escalated this week when the State Council’s Taiwan Affairs Office (TAO), the official body in charge of cross-Strait relations, announced during a press conference that it will take “all necessary measures to hold stubborn Taiwan secessionists accountable with no liability period” against Taiwan’s foreign minister, Jaushieh Joseph Wu. According to TAO spokeswoman Zhu Fenglian, Wu was being “provocative” and “smeared the mainland [China] and hyped opposition between the two sides of the Taiwan Straits.” His actions have “jeopardized the peace and stability of the Taiwan Straits,” she said, and “harmed the interests of mainland and Taiwan people.” For such “stubborn Taiwan secessionists,” Zhu added, China “will take all necessary measures to hold them accountable, with no liability period.”

The threat of retaliation against “stubborn secessionists” derives from China’s expanded national security laws, which not only purport to apply to Taiwan, but whose application has become increasingly extraterritorial. In other words, so-called crimes against the state – the three “evils” of separatism, terrorism and religious extremism – need not be committed within the People’s Republic of China or Hong Kong for the perpetrators to be liable to prosecution. There is no doubt that, in Beijing’s eyes, an outspoken foreign minister like Wu has violated the PRC’s national security laws and that, notwithstanding the fact that the purported “crimes” were committed outside China, Wu should be brought to justice in China.

By threatening a senior Taiwanese official in this fashion, Beijing has upped the ante. Escalation of this type by a state agency endangers officials like Wu and others, and exposes them to potential kidnapping and “repatriation” to China should they happen to visit, or to transit through, countries that are in Beijing’s pocket. Alarmingly, it also risks inspiring Chinese proxies in Taiwan, some of them linked to organized crime and violent-prone, to take such justice in their own hands.

With the state-sanctioned kidnapping of foreign nationals in recent years, including two Canadians, Beijing has demonstrated it has no compunction in nabbing its critics. Thus far, it has limited its kidnappings to academics, human rights activists and a handful of non-governmental officials. The TAO has now declared war on one of Taiwan’s most senior and respected officials. It would be foolish to assume that, having crossed that threshold, it will not use similar tactics to intimidate senior officials and prominent critics from other countries.

The extraterritoriality of China’s expanded national security laws is a threat to all of us. Using its economy and elite capture, China now has sufficient influence in a number of undemocratic countries that may be inclined to act upon Beijing’s “stubborn secessionists” blacklist (presumably there are also “stubborn terrorists” and “stubborn religious extremists” blacklists) by arresting such “wanted” individuals should they happen to be on their territory. Thus, while many are now aware of the heightened risks of traveling to China (and Hong Kong), the battleground for Beijing’s attempt to capture highly visible critics is now expanding to other parts of the world. Little by little, China is making it unsafe for activists, human rights workers, and Beijing’s critics to travel.

This explains why, in recent years, the Taiwanese government has issued a directive banning Taiwanese government officials from travelling to, or transiting in, certain countries and regions – China and Hong Kong, it goes without saying, but also captive states like Cambodia, whose leader, Hun Sen, has willingly subordinated himself to Beijing in return for arms sales and heavy Chinese investment.

Ottawa and capitals around the world cannot afford to remain silent in the face of such threats by the Chinese regime against officials from another country. Speaking up and putting Chinese officials on notice isn’t simple altruism: Taiwan is a canary in the coal mine, and the tactics Beijing uses against it are often a preview of what it will unleash against other countries. Such threats are an instrument of state terrorism. They certainly are not characteristic of a peaceful, law abiding and responsible superpower, as Xi Jinping wants us to believe.