Beijing's tyranny forced me to flee Hong Kong, but I will fight for democracy in exile: Nathan Law in the Guardian 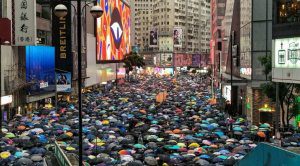 The national security law brought brutality to the streets of the city I love. Yet I believe we can regain our freedom, writes Nathan Law in the Guardian.

It has been three months since I left Hong Kong. With all my belongings in one backpack and a single piece of hand luggage, I travelled to another global financial centre: London.

From 2014, I had the privilege of being a student leader in the “umbrella movement” and becoming the youngest lawmaker in the Hong Kong legislature, at the age of 23. I was eventually imprisoned because of my peaceful political activism. Because of the draconian national security law imposed on Hong Kong three months ago, I had to flee so that I could continue to speak out freely for the city.

My personal safety was also a grave concern. I have been targeted by the Chinese Communist regime for a long time now, and they would have tried their best to put me in jail for as long as possible if I had stayed. Therefore, I needed to make a tough decision, and prepare for a new chapter of my life in exile.

There are many things in London that are familiar to me: the three-pinned plug sockets, the righthand-drive vehicles, the contours and skylines, and the fast-paced living style. But no matter where I go, little things around me remind me that how Hong Kong is dearest to my heart. I will continue to devote my life to the fight for a freer and democratic Hong Kong, even though the journey now has to continue from overseas.

I didn’t even get the chance to say goodbye to my family before I left. Keeping my departure a secret was my best way to protect them, and I have not been in touch with them since. This is to avoid putting them at risk of being labelled as “colluders”. In mainland China, family members of prosecuted human rights activists are subjected to police surveillance, harassment, detention and restrictions of freedom. The wide-ranging security law, which empowers Beijing to extend its most potent tools of control from the mainland, has led Hong Kong into a terrifying “new normal”.

There are so many grey areas under the law. Pro-democracy candidates are barred from running for political election because they objected to its implementation. People have been arrested and have faced the possibility of lengthy prison sentences under the security law simply because of chanting protest slogans or expressing their views on the internet. The fear of not knowing what can get people into trouble has put the city on tenterhooks.

Such terror is having a chilling effect on the foundational freedoms of the city. It has infiltrated civic society on all levels and in all professions, destroying the social fabric that encourages free expression. In the education sectors, the teaching curriculum is being scrutinised by the authorities in case it allows for positive discussion of the protest movement. One student was effectively expelled from school because he adopted a protest slogan as his nickname in the virtual classroom. Similarly, civil servants who took part in a strike to support the movement are facing disciplinary action, including the termination of contract.

Hong Kong is being transformed from a society that embraces the values of free thought and expression to one that is trying to eliminate dissident opinion. Without public legitimacy, the authorities are turning to their iron fist.

Public health has also become an excuse to justify suppression. The Covid-19 crisis offers a convenient pretext for the government to reject all applications for authorised assemblies and to brutally crack down on any public gatherings.

In these turbulent times, Hongkongers have become more subtle in their resistance. Being true to our mantra of “be water”, we will continue to embrace different tactics. For example, supporters frequently shop at stores owned by people who share the same democratic values as a way to strengthen an economic circle that backs the movement. When Jimmy Lai, the owner of the most vocal pro-democracy newspaper, Apple Daily, was arrested under the security law, enraged citizens scrambled to newsstands to buy all the papers to boost its circulation as a form of support. These practices unite pro-democracy activists and keep the momentum going.

We know this is going to be a long battle. Beijing is determined to rule Hong Kong with a heavy hand unless faced with a major crisis that forces it to loosen its grip. China is facing severe challenges on the domestic and international front, but it doesn’t look likely that it will suffer any catastrophic setbacks in the short term. The current situation is not favourable for us.

Nevertheless, I believe that time is on our side. The United States is determined to constrain China’s export of authoritarianism multilaterally, and there is a consensus building among European countries of adopting a more critical approach towards China.

In the past year, police brutality on the streets of Hong Kong has exposed the dangers of the Chinese regime, and has moved people around the world to support our cause. It has reshaped people’s perception of China from that of a benign and harmless nation to an aggressive, one-man empire, obsessed with power.

I am proud to be a Hongkonger, and I will never abandon the pursuit of democracy, which is ingrained in our identity. Even though I am in exile, and have said a seemingly eternal goodbye to the city I love, I do not regret my choices. I hope my advocacy work can pave my way back to Hong Kong, when I will finally get to greet my fellow Hongkongers with a bright smile as we cast our ballots to elect a leader to truly serve the people. This would be taken for granted by many living in democracies; but for us, it would be a dream come true.