Belarus is a warning of what can happen when authoritarians are squeezed by global powers: Kiarash Ighani and J. Berkshire Miller in the Globe 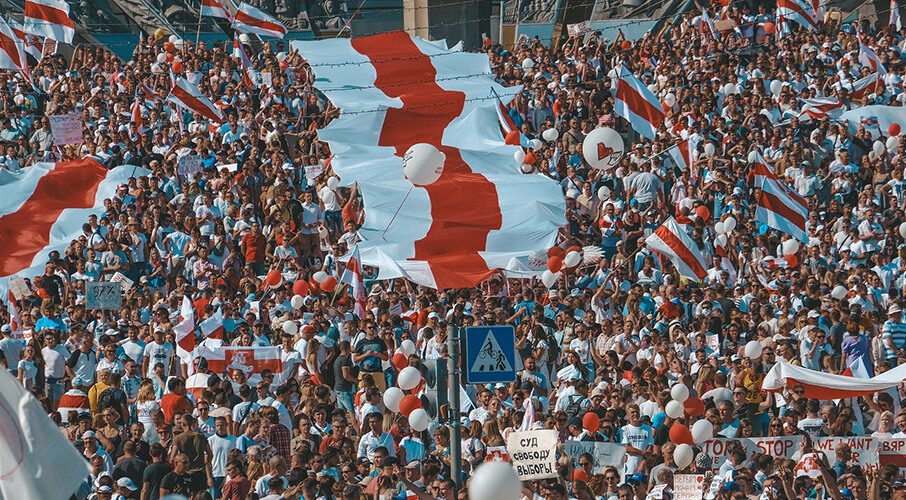 The situation in Belarus should be seen as a warning to the West once again on the reach of authoritarian regimes such as that in the Kremlin, and their ruthless drive to pursue their regional interests, write Kiarash Ighani and Jonathan Berkshire Miller in the Globe and Mail.

Last week, Canada joined other countries in imposing sanctions on Belarusian President Alexander Lukashenko and other high-ranking members of his administration over allegations of human rights violations following a rigged presidential election this past August. Yet Mr. Lukashenko, aptly labelled “the last dictator of Europe,” has carried on with his 26-year reign – thanks in large part to Belarus’s superpower neighbour to the east, Russia. Unfortunately for Belarusians, Russia continues to staunchly support its undemocratic ally, and Moscow has been one of the primary pillars in its longstanding survival.

The situation in Belarus should be seen as a warning to the West once again on the reach of authoritarian regimes such as that in the Kremlin, and their ruthless drive to pursue their regional interests.

Central Asian countries find themselves in a precarious geopolitical situation, sandwiched between two massive Eurasian authoritarian superpowers in Russia and China. Like Belarus, since their inception as new countries, gaining independence from the former Soviet Union in 1991, Kazakhstan, Uzbekistan, Tajikistan, Kyrgyzstan, and Turkmenistan have all had to try to cope with the political, economic and social pressures placed onto them by their domineering neighbours. It does no help to the people living in those states that the Central Asian countries are all run, to varying degrees, by authoritarians.

But what has changed in the past decade is the increase in economic and, ultimately, political pressure exerted on these states by their ambitious neighbours.

In 2015, Russia’s Eurasian Economic Union (EEU), a customs union between Russia and several former Soviet republics, came into effect. But while there is some economic benefit to having a smoother customs process – not having to wait three days to cross the borders with cargo, for example – the EEU has been an overall negative experience for Central Asia. Coupled with the Commonwealth of Independent States Free Trade Area (CISFTA), the EEU creates greater economic dependency on Moscow, and so when Russia’s economy slumps – which it often does and has in the past decade – the Central Asian economies suffer. Moscow’s economic woes and the collapse of the ruble have contributed to local economies taking a major hit.

Perhaps it is no surprise, then, that the only plausible alternative currently available – China – has been welcomed by the ruling elites of the Central Asian republics. China’s Silk Road Economic Belt (SREB) – one component of its massive infrastructure building vision dubbed the Belt and Road Initiative – is a multibillion dollar investment effort from China to create the necessary infrastructure for its economic vision in a multitude of countries spanning Eurasia. The catch: these lucrative development contracts are awarded to Chinese enterprises by the same self-serving undemocratic governments. While corrupt bureaucrats fill their pockets with bribe money, their countries go into even greater debt. Further, development projects almost always employ Chinese instead of local labour.

In order to secure Chinese investments, governments of Central Asian countries have entered into agreements with China and have changed their own laws. Kazakhstan, for example, has enacted land reforms that allow foreign interests to lease agricultural land for 25 years. This sparked anti-government and anti-Chinese protests in several cities across Kazakhstan – a country that does not have freedom of assembly, and arbitrarily detains anyone presumed to be protesting against government policy.

Indeed, the prospects and hopes for democratization in Central Asia seem grim. On one hand, the entirety of their short political history has been authoritarian and their bases for liberal democracy are lacking. On the other, the economic and political pressure exerted onto them by Russia and China emboldens and maintains the power of the authoritarian political elite of these states.

The economic reality of the reliance on Russian and Chinese markets certainly moulds the political reality of having to be more or less aligned to the policy positions of at least one of these two powers. Greater political independence from China and Russia necessitates the creation of greater market opportunities outside of the immediate region. Higher volumes of trade with a broader range of partners, especially democratic ones such as Canada, can provide the space to be more politically independent.

This move might be easier for Kazakhstan and Uzbekistan, given their wealth in natural resources. But governments in Canada and likeminded countries would be wise to engage Central Asian markets. That wouldn’t just be a mutually beneficial economic endeavour – it would also empower citizens who are thirsty for democracy.