How the Biden tax and infrastructure plan could boost Canada: Jack Mintz in the Financial Post 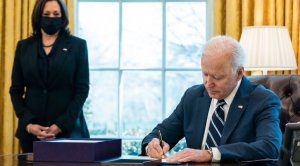 More growth in our largest trading partner means more spending on Canadian exports, which should be good for jobs here, writes Jack Mintz in the Financial Post. Below is an excerpt from the article, which can be read in full here.

U.S. President Joe Biden has released his infrastructure plan, which he proposes to pay for with a whopping US$2 trillion in corporate tax hikes over 15 years. Hoping that the tax increase won’t dent any growth coming from infrastructure spending, Biden is rolling the dice that his plan will bring jobs back home. Perhaps it will but if so, that could be bad news for U.S. trading partners — Canada foremost among them.

The Biden tax plan would increase the federal corporate income tax rate from 21 to 28 per cent and introduce a 15 per cent minimum tax on large corporations operating in the United States. A real kicker is a 21 per cent minimum tax rate on foreign profits earned by U.S. corporations on their investments in other countries. That will raise taxes on U.S. investments abroad, especially in low-tax countries. Finally, the plan explicitly goes after unspecified fossil-fuel corporate tax incentives while providing tax breaks for in-shoring activities (i.e., moving activity and jobs back to the U.S.).

What does all this mean for Canada? Keynesian-inspired infrastructure spending will probably stimulate U.S. growth through the usual multiplier effects, even if these are often over-estimated. More growth in our largest trading partner means more spending on Canadian exports, which should be good for jobs here.

But this growth effect will be dampened and maybe even entirely offset by the corporate tax hikes. The Biden plan says the new tax revenues will be more than enough to pay for its infrastructure binge, and maybe even help cut the deficit — though assuming no other spending will come down the pike is a stretch. Nor should we forget new “Buy America” rules requiring local employment and content in U.S. public infrastructure procurement. They will take some of the wind out of the sails of countries, like us, who would like to export into the expanding U.S. economy.