After Brussels, Trump will have few offerings for Putin: Aurel Braun for The Globe and Mail 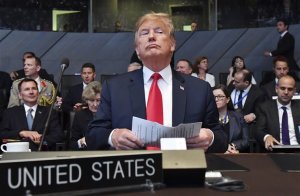 Despite Mr. Trump’s relentless criticism of allies, his contrasting soft rhetoric on Russia has belied the reality that in policy terms he has so far offered Moscow quite little, writes Aurel Braun.

Despite a most inauspicious start, this year’s NATO summit in Brussels turned out to be neither the train wreck that many feared nor an unalloyed success. All the members, it appears, can derive a degree of comfort from what essentially remains a difficult work in progress.

For the United States’ allies, the Brussels Declaration, signed by all the members, is a welcome reiteration of the strong commitment to Article 5 of the Washington Treaty, which stipulates that any attack against one ally “will be regarded as an attack against us all.” Further, the Declaration includes withering criticism of Russia and warnings to Moscow. It condemns Moscow’s aggression in Ukraine, provocative Russian military activities near NATO borders, its modernization of strategic forces, “its irresponsible and aggressive nuclear rhetoric,” among other activities, which have made the Euro-Atlantic security environment “less stable and predictable,” and deplores Russia’s cyber activities and its attempted interference in the election processes of NATO states.

Notably, the Declaration warns Moscow that NATO stands in support of the territorial integrity and sovereignty of Ukraine, Georgia and the Republic of Moldova, and strongly condemns “Russia’s illegal and illegitimate annexation of Crimea, which we do not and will not recognize.” This certainly puts to bed the speculation and fear that U.S. President Donald Trump will buy President Vladimir Putin’s goodwill by recognizing Russia’s annexation of Crimea.

Reassuringly for the Europeans, the members also committed themselves to bolstering the transatlantic link and to continued engagement in military exercises to improve effectiveness and rapid reinforcement. Again, this alleviates the fear that Mr. Trump could offer Mr. Putin a hiatus in joint allied military exercises (the way Washington had done recently with North Korea).

As for Mr. Trump, although he did not get the assurance that every alliance member will meet the 2 per cent of GDP defence expenditure target by 2024 – never mind the 4-per-cent possibility he mentioned – a close examination of the Declaration suggests that Washington made significant headway. In Section 1 of the Declaration, the commitment to Article 5 is paired with “fair burden-sharing” – code for greater defence contributions by U.S. allies. Section 3 goes further in stipulating that “fair burden-sharing” is the basis of alliance cohesion and credibility and “underpins” the “ability to fulfill our Article 5 and Article 3 commitments.” It is noteworthy that Article 3, inter alia, requires continuous and effective self-help and obliges members to “maintain and develop their individual and collective capacity to resist armed attack.”

Additionally, Section 3 of the Declaration notes that all the allies have started to increase defence spending in real terms and that two-thirds of the membership is on track to reach the 2-per-cent goal by 2024. The latest NATO figures show that in 2018, seven European members will meet the 2-per-cent guideline. This includes Britain, the three Baltic states, Poland and Romania – to the applause of Washington.

Vitally, NATO is also launching a Readiness Initiative pushed by U.S. Defence Secretary James Mattis whereby the allies will offer an additional 30 heavy or medium manoeuvre battalions, 30 air squadrons and 30 major naval combatants, all within 30 days or less readiness. This will mean that the European allies will definitely have to enhance their contributions.

Further, although Mr. Trump, with his crude, hyperbolic, confrontational approach may be a terrible messenger for even the most reasonable ideas, he conveyed to the European allies a number of inconvenient truths with long-term implications, including: the defence of Europe cannot be more important to the United States than to Europeans themselves; if the Europeans are worried about Russia (with good reason), they need to increase defence spending; the Europeans cannot expect the United States to pay for their protection while they make profit in deals with Russia – hence the clumsy and hyperbolic criticism by Mr. Trump of Germany’s vast energy deals with Russia, including the huge Nord Stream gas pipelines in the Baltic sea that bypass Poland and Ukraine and are a great security concern to many NATO states; and that security and trade do have a connection and that geopolitics and geo-economics do meet.

Mr. Trump leaves for the Helsinki Summit with Mr. Putin with a relatively united NATO that is committed to greater military expenditures, in addition to the very significant increase in U.S. military spending. To the relief of many, Mr. Trump, who affirmed his support for NATO, also will now be rather constrained in the kind of concessions that he might be able to offer to Russia. Despite Mr. Trump’s relentless criticism of allies, his contrasting soft rhetoric on Russia has belied the reality that in policy terms he has so far offered Moscow quite little.

Aurel Braun is a professor of international relations and political science at the University of Toronto and an associate at the Davis Center, Harvard University.