Budget rains down oceans of red ink but may not be as transformative as it seems: Philip Cross in the Financial Post 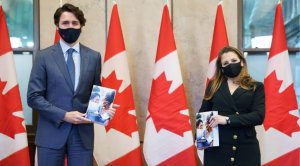 The budget serves as an excellent summary of the Trudeau government — it excels at posturing but is weak on delivering results, writes Philip Cross in the Financial Post. Below is an excerpt from the article, which can be read in full here.

The 2021 budget is an excellent summary of the Trudeau government. It excels at posturing but is weak on delivering results. We have seen this repeatedly on issues including climate change, child care, feminism, democratic and transparent government, Aboriginal reconciliation, and youth. Instead of a great “reset” fundamentally transforming our society, the budget presents a wide range of spending initiatives without the focus on one or two major issues that is the hallmark of major societal or organizational change. The political artistry of the prime minister is in posing as an agent of radical change while implementing incremental refinements unless circumstances force his hand. Perhaps Canadians should be grateful.

Child care is a good place to start, since that is most prominently displayed in the budget’s showcase window. Leading up to the budget, Trudeau and Finance Minister Chrystia Freeland repeatedly said that now was the time for decisive action to create a national child-care program. Instead, they have delivered only a hypothetical down payment for a program that ultimately will depend on provincial cooperation. Some provinces cannot undertake any new spending or simply prefer giving money directly to parents rather than to state-run bureaucracies. A national child-care program therefore remains more aspiration than reality.

Child care is emblematic of how this government boasts about its feminist credentials. But all its loud talk failed to prevent working women from their worst ever setback during a recession. Neither has this government shown leadership in protecting women in the military from sexual harassment (although the budget will spend another $158.5 million over five years to try, try again). The prime minister did appoint the first female finance minister — though only after not naming the first female governor of the Bank of Canada at precisely the moment when the governor became the one indispensable Ottawa decider: the government’s entire post-pandemic agenda could be derailed overnight by a significant move up in interest rates.