What Canada can and should do about the crisis in Hong Kong?: J. Michael Cole for Inside Policy 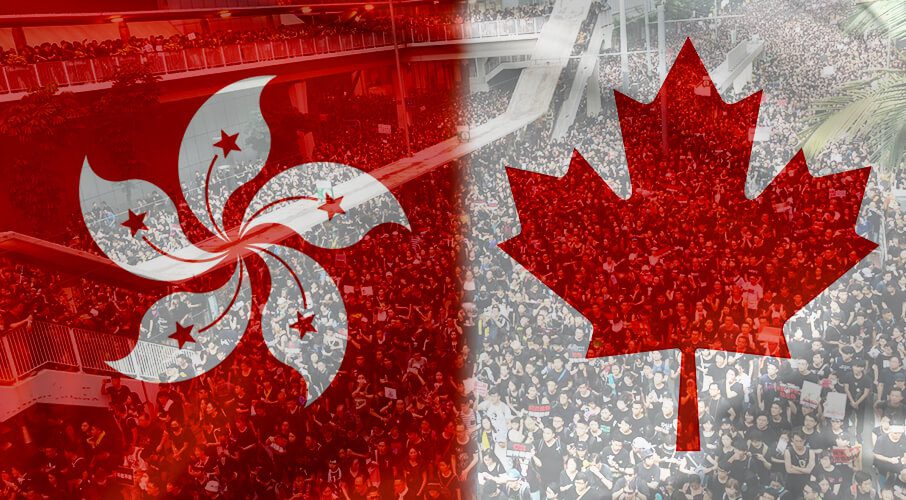 Canada and like-minded allies must be prepared to respond should Beijing decide to act on its authoritarian instincts in Hong Kong, writes J. Michael Cole.

In recent weeks, the daily flow of young protesters getting tear gassed, truncheoned, fired at and assailed by anti-riot police and violent triad members on Hong Kong’s streets, in its MTR stations and at its shopping malls has grabbed headlines worldwide, sparking a crisis for the Chinese leadership unlike any it has faced since the terrible events around Tiananmen Square in June 1989.

What started as a protest against a controversial extradition bill has mutated into a rising act of defiance against the Chinese Communist Party (CCP) and the “one country, two systems” formula, under which Hong Kong was incorporated into the People’s Republic of China in 1997 with the promise by Beijing that the former British colony would retain a large degree of autonomy — at least until 2047.

The erosion, slow at first but accelerating in recent years, of freedoms and liberties within the special administrative region, the more frequent interference by Beijing in Hong Kong’s affairs, and the assault on its language and idiosyncratic culture, spells a future which many of Hong Kong’s youth do not want for themselves. Cognizant that the status quo is tantamount to capitulation, young activists and a large swath of society behind them are now openly challenging Beijing’s writ in Hong Kong and are willing to take risks to defend their way of life. The Hong Kong government’s response has been inflexible, out of touch, and increasingly violent, with law enforcement and suspected pro-Beijing triad members, ostensibly coordinating with Hong Kong police, physically assaulting protesters.

With intimidation failing to deter the protest groups, Beijing has fueled nationalist sentiment among Chinese worldwide and launched a global disinformation campaign to discredit the protesters, referring to them as “rioters” and suggesting that some of their actions (presumably directed by “foreign forces”) constitute “terrorism” — a term the Party has normally used to describe resistance in majority-Muslim Xinjiang and the protests in 1989, which sparked a bloody crackdown by the military.

Alongside the rhetoric, Beijing has also signaled that should Hong Kong authorities fail to end the unrest, the People’s Armed Police (PAP), and, in the extreme, the People’s Liberation Army (PLA) garrisoned in Hong Kong could, at the invitation of the Hong Kong government, become involved. Lest this message be forgotten, Beijing has deployed thousands of paramilitary police ostensibly for exercises across the border in Shenzhen.

By directly defying Beijing, the protesters have put the CCP in a situation that it will not countenance. The main issue for Beijing is not so much the attack on “one country, two systems,” a formula which it never truly believed in to begin with, but rather the fear that rebellion risks exposing Beijing’s weakness and metastasizing to other, equally unstable but under-reported, parts of China. Thus, Beijing cannot — and will not — back down, as this could lead to similar appeals by other minorities in China and directly challenge the CCP’s grip on Chinese society.

Stability was, and remains, the Party’s No. 1 consideration, which is directly associated with the inviolability of the CCP’s primacy. The real consequence of this is that unless the protesters back down (only temporarily, as the underlying issues will not have been addressed), Beijing and its proxies in Hong Kong will remain committed to an escalatory policy of repression.

Knowing this, as a country with substantial links to and over 300,000 citizens living in Hong Kong, what can Canada do to prevent excesses, if not a bloodbath, and ensure its residents can defend their rights and freedoms? So far, our government’s response has been disappointing and, at best, inconsistent. Canada can, and should, do more.

As a middle power, it would be presumptuous to expect that Canada could, on its own, fundamentally influence the CCP’s behavior on a matter which Beijing regards as an existential threat to its control in China. The situation calls for Canada to join and coordinate with other democracies in condemning police excesses in Hong Kong and calling for an independent inquiry into the matter. With like-minded democracies, Ottawa should hold Beijing and Hong Kong authorities to account for violating their commitments and responsibilities to the people of Hong Kong under the Sino-British Joint Declaration of 1984 and Hong Kong’s Basic Law. It should also call for the complete removal of the extradition bill, for the release of peaceful protesters who have been unfairly detained, and for the media’s ability to continue to report on developments there.

The Canadian government should avoid adopting Beijing’s propaganda which refers to the protesters as “rioters” and should not legitimize claims to a moral equivalence between the two sides, as none exists. It should also firmly condemn Beijing’s claim that the protesters have engaged in terrorism and warn against the enforcement excesses that such a characterization could engender. It should nevertheless encourage protesters to continue to adhere to peaceful strategies.

Following incidents in Australia and New Zealand, Ottawa must also ensure that Hong Kong students and their supporters on campuses nationwide can organize events without risks of intimidation or physical attack by their Chinese counterparts. With the Hong Kong crisis going global, law enforcement must look after the safety of people of Hong Kong origin who reside in Canada, as some of them may become targets of intimidation and retaliation by the many CCP proxies that operate, presumably at the behest of local Chinese consulates and the embassy, within our country.

Finally, in concert with other countries, Canada should also be ready to impose targeted sanctions or travel bans against Hong Hong and/or CCP officials who are complicit in police brutality against peaceful protesters, especially if a PAP/PLA deployment in Hong Kong were to materialize. Ottawa should also make necessary preparations to offer assistance to imperiled Hong Kong residents seeking asylum in Canada. In a coordinated warning to Beijing, Canada must state that a PAP/PLA crackdown in Hong Kong would carry serious consequences for the CCP.

Given the severity of the situation and the potential for serious harm, rhetoric alone will unlikely change Beijing’s behavior. Canada and like-minded allies must be prepared to respond should Beijing decide to act on its authoritarian instincts in Hong Kong.

J. Michael Cole is a Taiwan-based senior fellow with the Macdonald-Laurier Institute and the Global Taiwan Institute in Washington, D.C. He is a former analyst with the Canadian Security Intelligence Service in Ottawa.