Now is the time to strengthen Canada-India relations, not weaken it: Anirudh Bhattacharyya for Inside Policy 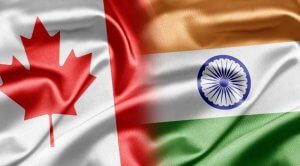 Recent developments in Canada, if left unchecked, can only make things worse for the fraught relationship with the world’s largest democracy, writes Anirudh Bhattacharyya.

In October 2016, I met India’s then Finance Minister, the late Arun Jaitley, during his visit to Toronto. While talking about Canadian lentil exports, he quipped that India would prefer to buy them from other countries as the flavour of the Canadian produce didn’t match the Indian palate. I’m no foodie, so I don’t know if that’s literally true, but Jaitley’s remark was at least partly metaphorical, pointing to the fact that some things Canada did left a bad taste in the mouth for the Indian government.

In 2009, when annual bilateral trade between Canada and India stood at around $4.5 billion, the two countries had announced a target of $15 billion to be reached by 2015. Five years after the deadline, the annual trade had only crossed two-thirds of the target. Last year, India’s bilateral trade with the US stood at US $150 billion; with the UK at over US$33 billion; and with Australia at US$30 billion.

If institutions like pension funds have invested heavily into Indian infrastructure sector and markets, those initiatives have come despite bilateral lethargy. India has set itself an ambitious target of becoming a US$5-trillion economy by 2024 and is forecast to grow 10 percent this year. Yet Canada has been unable to deepen its engagement with the South Asian giant. The Indian government too has not been in a hurry to embrace Canada due to a persistent, thorny issue – the influence that supporters and instigators of the separatist Khalistan movement continue to enjoy in this country.

Recent developments in Canada, if left unchecked, can only make things worse for the fraught relationship with the world’s largest democracy. I’m referring to the echo in Canada of the ongoing protests in India by farmers from Punjab and other states. Prime Minister Justin Trudeau, whether intentionally or otherwise, angered the government of India by his gratuitous comments in the early days of the protest. “Canada will always be there to defend the right to peaceful protest,” he said, ignoring the fact that the protest was taking place precisely because India is a democracy, unlike say, China, a country that he has been strangely reticent to promote human rights in. His comments prompted a diplomatic demarche to Canada’s High Commissioner from India’s Ministry of External Affairs.

As the Indian government has pointed out, there has been broad political consensus for many years over the agricultural reform laws that the protestors want repealed, even if some political parties now oppose them. The three laws were passed in Parliament by a democratically elected majority government, even if the process in the upper house, the Rajya Sabha, was chaotic. The aim, in theory, is to expand market access for crops, eliminate middlemen and increase farmers’ incomes.

The IMF’s Chief Economist Gita Gopinath has said, “These particular farm laws were in the area of marketing. It was widening the market for farmers. Being able to sell to multiple outlets besides the Mandis without having to pay a tax. And this had the potential to raise, in our view, farmers’ incomes,” while also calling for the provision of a social safety net for vulnerable farmers. Saskatchewan Premier Scott Moe also voiced his support for the laws, saying, “As painful and challenging as the discussion is in India, I think Saskatchewan can provide an example of moving through the years away from sustenance agriculture to producing more and decreasing your risks of lack of food in your community and in your country, and ultimately moving toward a market-based agriculture system that provides opportunities for higher production and sustainability.”

No law is universally liked, and there are certainly clauses to contest within the three contentious pieces of legislation, and perhaps criticize the Narendra Modi government over the somewhat peremptory manner in which it passes bills in India’s Parliament. However, the farmers’ groups have adopted a maximalist approach to negotiations, seeking a complete repeal without accepting the clause-by-clause discussion offered by India’s Agriculture Minister.

Given the structure of food grain procurement in Punjab (and a smaller belt in North India encompassing parts of the states of Haryana and Uttar Pradesh), the opposition to the new laws was markedly strong among one section of the agricultural community in the state, and the contingent from Punjab made up the majority of the protesters who converged and camped at Delhi’s borders. Early on, there was concern that Khalistanis could infiltrate and hijack the protest. Indeed, the storming of the Red Fort on January 26, India’s Republic Day, and the hoisting of a Sikh religious flag at the national monument, only succeeded in convincing Indians that this was no ordinary farmers’ protest. To be fair, the bulk of protestors cannot be blamed for such elements taking advantage of their movement.

Nor can we expect rational thinking from Canada-based activists and supposedly pro-environment organizations that rely on rhetoric like “Why Is India Killing its Own People?” (later edited to “Why Is India Killing its Democracy?”) or offer a section on “Indian Fascism 101” on their campaign website. According to them, the government in New Delhi is so hardline that it has allowed peaceful protestors to congregate for over four months, blocking important arteries linking the national capital to other states. And it has such a killer instinct that despite over 300 law enforcement personnel being injured by some rioting protestors, the latter group suffered no retaliation. Yes, there was one death, when a young man died after a tractor accident during the farmers’ rally on January 26.

As for the ecological aspect, the current cropping patterns in Punjab, divorced from the reality of its land, have contributed to dangerous depletion of groundwater levels and stubble burning that causes parts of North India, including New Delhi, to wheeze through a pall of smoke every autumn.

But if your larger cause is fracturing India, as some self-professed proponents of the protests have made evident in Canada, logic cannot be allowed to intrude. Unfortunately, even the Canadian mainstream media has failed to conduct due diligence in this regard while amplifying the narrative, even buying the falsehood that the minimum support price mechanism is being dismantled. In fact, networks have been monotonous in their depiction of the protests, even featuring individuals who coordinated a blockade of India’s consulate in Vancouver, followed by speeches supporting Khalistan. The media has recycled “woke” jargon instead of checking facts.

Local political pressures, especially in what is speculated to be an election year, may prompt Canadian politicians of all stripes to pander to what they consider a vote bank among Sikh Canadians. But this could have dangerous implications for Canada’s foreign policy at a time when it should be strengthening ties with India, not weakening them, particularly with challenges looming in the Indo-Pacific and China’s aggressive tendencies constituting a common threat.

It could also disturb the domestic peace as there are already emerging signs of sectarian intimidation. Several Indo-Canadians who rallied in support of the Indian laws and to express support for India in cities across Canada have reported receiving threatening messages targeting their families and businesses. The Khalistan lobby is feeding off the tacit support it is being afforded by leaders across party lines. Silence from Ottawa emboldens them. Many Hindu Canadians, meanwhile, feel abandoned by the state. For a government that officially stands for ‘one, united India,’ that’s political hypocrisy.

Canadians cannot afford to forget that Khalistani terrorists were responsible for the country’s biggest terrorist incident – the June 23, 1985 bombing of Air India’s Flight 182 that resulted in the death of 329 people, a majority of them Canadian citizens.

The advantages to Canada of a closer relationship with India are many, and most recently brought home by India’s promise to supply much-needed vaccines against COVID-19. India is also a leading source of immigrants and international students to Canada. India is emerging as a strong force in the Indo-Pacific, and its role in the region has been recognized by Canada’s close allies, the US, Australia and Japan. As a Pacific nation and a signatory to the Comprehensive and Progressive Agreement for Trans-Pacific Partnership, Canada has strong security and commercial interests in the region. Both Canada and India have a common interest in ensuring the Indo-Pacific region is secure, free and open. Indeed, in January 2021, Canada took part in a joint military exercise in the Pacific Ocean with the Quad countries of India, Japan, Australia and the US for the first time.

At a time when China’s Communist leadership is coming under censure on various fronts including its handling of COVID-19, genocide in Xinjiang, muzzling protests in Hong Kong, expansionist threats to its neighbours as well as the arbitrary detention of two Canadian citizens, it is in Canada’s interests to strengthen political and economic ties with a diverse, vibrant, multi-cultural democracy. Yes, India remains a flawed democracy, with much that needs to be rectified, but the bottomline is that Indian citizens can make their displeasure with the ruling dispensation clear at the ballot box, an option missing in large swathes of the world.

No Indian government, regardless of the party in power, will countenance Canada turning a blind eye to Khalistanis operating on its soil. But, given the current political trajectory, the bilateral relationship is unlikely to recover any time soon. It may be tough to find a palate cleanser to dispel the distaste developing in New Delhi.

Anirudh Bhattacharyya represents the Indian national daily, the Hindustan Times, in Canada. He has worked in New Delhi, New York and Toronto in print, television and digital media.