Canada-Mexico relations - A lifeboat in turbulent trade waters: Laura Dawson in the Globe and Mail 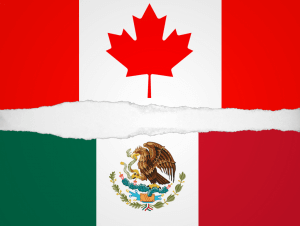 Despite rumours of one throwing the other under the bus, Mexico and Canada have stuck together through the NAFTA 2.0 negotiations, recognizing that a united front gives them a strong defence against the U.S. divide-and-conquer approach, writes Laura Dawson.

Relations between the United States and its trading partners are at their lowest ebb since the imposition of the 1930 Smoot-Hawley Tariff that triggered the Great Depression. Canada’s sales to the United States represent some 76 per cent of its total merchandise exports, putting Canadian businesses in the path of the hurricane. But Canada has an ally. In 1994, the economies of Canada and Mexico were united – for better or worse – through the North American free-trade agreement.

At first, it was an uneasy relationship. The priority for both countries in those early days experimenting with new free-trade agreements was secure and predictable trade with the United States, the largest market for both. Addition of a third country was an unwanted complication. Even though inputs from both Canada and Mexico found their way into U.S. finished goods, there was little direct trade between the two.

Today, with manufacturing transformed into a geographically dispersed process, both Canada and Mexico recognize the importance of NAFTA to facilitate movement of inputs across integrated and efficient supply chains, and this has strengthened the bilateral trade relationship. Canadian investment and technology help to develop the capacities of Mexican aerospace workers and Mexican know-how and market demand help to preserve and expand the Canadian auto parts industry.

North America’s competitiveness in the world depends on the complementary mix of endowments that all three countries bring to the NAFTA relationship, but that relationship is under threat as a result of escalating tariff wars and deal-killing demands that block progress towards a modernized NAFTA.

Some Canadians are in denial about the trade threats emanating from the White House. They believe that Canada is not in the cross hairs because it is the largest buyer of U.S. products, and wage rates and labour standards are comparable to those in the United States. But reason plays little role in the political theatre that has taken over trade policy today.

Canada is in a disadvantageous position vis-à-vis the United States because it has very few credible threats it can make that could change U.S. behaviour. No matter what punitive actions the White House throws at Canadians, they will continue to be a secure, reliable trading partner because that is the way Canadian businesses and institutions operate. So, the beatings will continue as long as they serve a political purpose in the United States.

Mexico, on the other hand, has both carrot and stick. The Peña-Nieto administration explicitly tied co-operation on borders, migration, drugs and security with progress on trade. Mexico’s capacity to unleash instability in the United States, especially on the southern border, provides leverage in the U.S. Congress that Canada cannot muster.

Fortunately, NAFTA’s arranged marriage between Canada and Mexico has come of age. Government-to-government linkages have been brought to life through companies such as Bombardier, Palliser Furniture, Magna, Scotiabank and Grupo Bimbo (this is the Mexican company that now manufactures the iconic Canadian Joe Louis cake).

Politically, the Canada-Mexico relationship has experienced some bumps, due in large part to the Harper government’s onerous visa requirements for Mexican travelers, but the Trudeau government has mended fences. Foreign Minister Chrystia Freeland and other members of cabinet have made frequent outreach trips to Mexico, and Canada’s ambassador to Mexico, Pierre Alarie, quarterbacks the relationship with skills honed through deep knowledge of, and appreciation for, Mexico and its people.

Despite rumours of one throwing the other under the bus, Mexico and Canada have stuck together through the NAFTA 2.0 negotiations, recognizing that a united front gives them a strong defence against the U.S. divide-and-conquer approach.

There are issues over which the two countries differ, but they are matters of degree, not principle. Mexico cares more about tomatoes, Canada cares more about dairy, but both agree that a modernized NAFTA would deliver competitive gains for North America in the world.

The question for Canada is whether president-elect Andres Manuel Lopez Obrador will retain the solidarity with Canada extended by his predecessor. So far, so good. Statements by U.S. Trade Representative Robert Lighthizer about doing bilateral deal with Mexico first in order to extract concessions from Canada have been countered by reaffirmations from the new Mexican administration to the trilateral process.

The Canada-Mexico union is going to require continued attention to ensure its durability. While both Mexico and Canada are committed to blocking the U.S. proposal for a sunset clause to the agreement, on other issues, such as rules of origin for autos or dairy protections, each side will be tempted by the United States to break their alliance. This would be a mistake because while such deals would provide national gains in the short term, Canada and Mexico would lose the collective leverage needed to finish a deal with a U.S. Trade Representative eager to exploit any weakness.