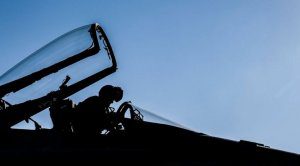 The security challenges and needs facing Canada are quite visible to even casual observers of the news today. We ignore it at our peril, writes Richard Shimooka for the Toronto Star.

This article appeared as a part of the Toronto Star's Saturday Debate.

The COVID-19 pandemic has shown that government preparation is essential to successfully navigate unexpected crises. Yet, despite the experience of the 2003 SARS outbreak, successive governments have failed to maintain key capabilities and knowledge, leading to a lacklustre response in the early days of the pandemic. An obvious parallel exists with the recent debate over the need for a fighter aircraft in Canada.

A standing military is tasked with safeguarding the country’s domestic sovereignty and territorial integrity. With climate change opening up access to the north, and Russia investing heavily in Arctic capabilities, the challenges facing Canada’s sovereignty in the Far North are not abating. No serious state abrogates its core responsibilities towards defending its own territory. Even Switzerland, a country with a strict neutrality policy, maintains a strong military to protect its sovereignty.

However, Canada’s situation is complicated by its proximity to the United States. Despite recent challenges with the Trump administration, no other country enjoys a stronger political, economic and military relationship with the U.S.

Yet, Canada also represents the biggest vulnerability to our neighbour. The shortest aerial route from China and Russia to strike the U.S. is through Canadian territory. As such, the idea that Canada can somehow disentangle itself from the United States, either by demilitarization or by decoupling its political alliance, is a fallacy that would only result in an immense geopolitical win for our adversaries.

Conversely, Ottawa’s close ties to Washington often leads some to assume Canada does not need to spend on defence, instead relying on the U.S. to defend Canada’s territory. Yet this would basically result in the U.S. either dictating our security decisions or taking a much tougher line on bilateral relations.

Canada also needs to maintain a competent military to safeguard our interests abroad. The country’s prosperity was founded on a stable international order, and states can and do use military force to impose their interests — as shown by Russia’s incursion into Crimea and Ukraine and China’s belligerence towards Taiwan and Japan.

Canadian prime ministers have long affirmed this view, but the country has, on occasion, bumped against the limits of contributing too little. In 1969, Pierre Trudeau unilaterally slashed Canada’s contribution to NATO, partly on the belief that military force was no longer as salient.

This was greeted with consternation by allies, but especially West Germany — to the extent that it linked the signing of future trade deals with Canada increasing its defence contribution to Europe. Trudeau Sr. reassessed his initial policies and later embarked on a major military rearmament program, which included purchasing the CF-18s we use today.

Yet what mix of forces best suits Canada’s needs today? The country has the world’s second largest land mass but the 37th largest population. It is utterly impractical to defend the country with only ships or ground troops; fighter aircraft are the only real solution to successfully deter incursions of the country’s vast territory. The total cost of the amortized acquisition of the fighter force and its operation is roughly $2.5 billion a year, or about 0.15 per cent of Canada’s annual GDP.

Air power is also arguably the most responsive capability the military has today. In addition to its North American duties, Canada regularly deploys CF-18s to defend our allies abroad in Eastern Europe, for instance.

Fighter aircraft, and air power more broadly, are considered an essential capability. Militaries require a broad spectrum of capabilities to operate effectively and neglecting one area over others creates serious vulnerabilities.

New technologies have also emerged in the past few decades, including cyber warfare, hypersonic missiles and unmanned aerial vehicles. This has led some to question the utility of fighter aircraft. Yet 12 next generation fighter programs are currently underway among nine countries. Simply put, manned fighters are here to stay for the foreseeable future.

Importantly, Canada’s fighter force is in dire need of replacement. The CF-18s are already a decade past their expected lifespan and cannot be expected to last more than five to 10 additional years. Our allies have taken note and have pushed for Canada to make a decision.

The CF-18 replacement saga has some parallels to the lack of pre-pandemic planning. Unlike COVID, however, the security challenges and needs facing Canada are quite visible to even casual observers of the news today. We ignore it at our peril.