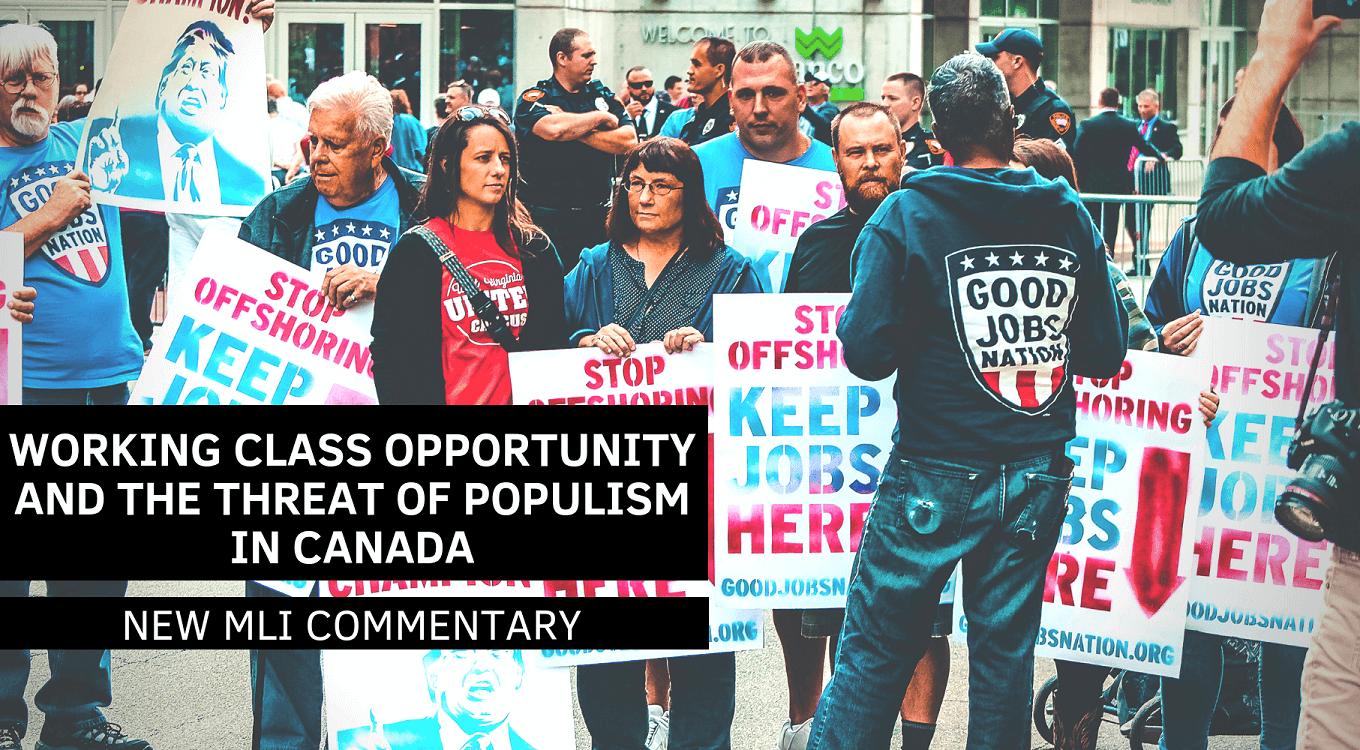 OTTAWA, ON (December 14, 2018): Over the last few years, Canadians have been hearing more and more about political populism rising across the Western world. But what is causing it, what can we learn from elsewhere, and how might it manifest itself in Canada?

In a new commentary Working-Class Opportunity and the Threat of Populism in Canada, MLI Munk Senior Fellow Sean Speer examines the root causes of populism and warns against complacency in Canada. Speer analyses the theoretical and empirical literature and argues that the economic conditions for a rise in populism are emerging in Canada.

In particular, the report highlights the role that natural resources have played in obscuring the structural labour market challenges that Canada is facing – particularly for the nearly 40 percent of Canada’s population without post-secondary education.  “A failure to recognize the political risks caused by working-class dislocation and to respond with a substantive policy agenda that addresses the issues and concerns of at-risk workers will [eventually hasten] a political backlash,” Speer writes. “The idea that we are somehow immune to political populism is a perilous assumption.”

In the commentary, Speer finds that working-class Canadians without post-secondary education are facing the most pressures and stresses in today’s economy due to the combination of trade, technology, and the transition to service-based specialization. “It is no surprise [that] these citizens also form the nucleus of populist politics in the United States, the United Kingdom, and elsewhere.”

While Canada’s high post-secondary attainment rates have helped create a higher-skilled workforce that is more resistant to economic dislocation, Speer cautions that there is still a sizable number of working-class Canadians who are at risk of being left behind.

He finds that working-class Canadians without post-secondary education account for around 36 percent of the population between ages 25 and 64.

The other stop-gap against economic dislocation has been the natural resource sector in Canada. The sector plays a unique role in the economy because of its ongoing demand for blue-collar workers – including those without post-secondary education. However, Speer contends that this basic insight is being ignored by some policy-makers.

“We seem to be imposing new and additional burdens on the sector without careful consideration of the potential economic, political, and social costs including the erosion of an outlet for working-class opportunity,” Speer writes. “Harming the one sector that has helped us mitigate the economic dislocation and accompanying disruptive politics witnessed elsewhere may be something that we seriously regret.”

What can be done to stem the rising tide of populism in Canada? Speer argues that decision-makers need to better prioritize the needs of working-class people. To do that, three main shifts in public policy thinking need to occur:

“Policy-makers from across the political spectrum must become champions for those working-class people by advancing a pro-work, pro-opportunity agenda,” Speer concludes. “Such a policy agenda would remove policy obstacles to resource development in particular and place a greater emphasis on supporting paid employment rather than relying on redistribution in general.”

To learn more about the forces that are driving populism and how Canada can inoculate itself against such disruption, read the full commentary here.

Sean Speer is a Munk Senior Fellow at the Macdonald-Laurier Institute. He previously served in different roles for the federal government including as senior economic advisor to the Prime Minister and director of policy to the Minister of Finance