Note: The Misery Index has been updated. The analysis and data in this press release is relevant to the initial Index, which launched March 8th, and may not remain completely reflective of the Index beyond that date. The original Misery Index as it appeared on March 8th can be viewed here, and the most recent version is available here.

OTTAWA, ON (March 8, 2021): A year has passed since the COVID-19 pandemic hit Canada with full force, and the results are in on how severely the impact of the virus has been felt in this country compared to similar advanced economies. Canada’s performance has been revealed to be well below average, with particularly poor results in our public health response and managing the economic impact.

The Macdonald-Laurier Institute “COVID Misery Index,” released today, is based on data analysis conducted by Richard Audas, the lead methodologist on the Misery Index and the co-author of MLI’s award winning Report Card on the Criminal Justice System.

The COVID Misery Index compares the performance of 15 similar nations in protecting the health and prosperity of their citizens during the pandemic. Those with higher scores have felt more misery, including from the spread of sickness and death from the disease itself, slow or poor responses by government, and economic decline. 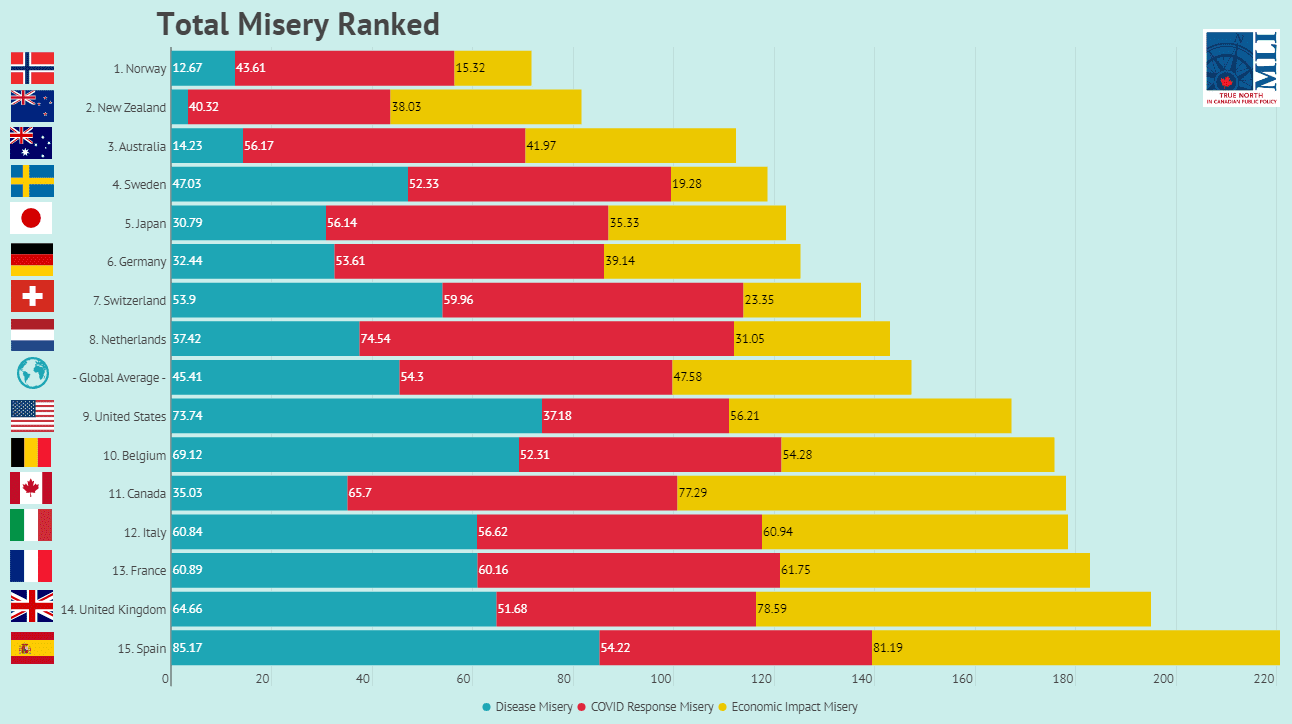 Overall, Canada ranks 11th out of the 15 countries measured, indicating a relatively poor performance in terms of reducing the misery of the pandemic. Relative to its peers, Canada gets a “C” in terms of its overall performance.

This result is derived from assessing the data across three main categories that capture the disease impact,  management response, and economic impact of each nation by measuring performance on 16 key metrics. Measures include the number of infections, COVID-related deaths, lockdown stringency, vaccination rates, testing capacity, changes in GDP, unemployment, public debt, and more.

View the full index, with in-depth data visualizations here, or read the write up report with a full methodology here.

The news is not all bad for Canada. When it comes to limiting disease misery, the country places sixth out of 15 countries measured, receiving a “B” in this category, including the spread of cases and deaths. But in terms of the misery wrought by our response to the pandemic, we are ranked 14th out of 15 (a “D” letter-grade). The Netherlands is the only country with a worse response performance. With Canada ranked 13th in economic performance, the COVID Misery Index suggests that this country’s inefficient approach to the virus was more costly than in other countries. Our poor economic result was another “D” and is the single greatest contributor to overall misery in Canada.

“While Canada was spared the worst ravages of the disease, our response to it has brought significant misery, largely attributable to quite strong restrictions in behaviour and a lagging vaccination program,” writes Audas. “The economic misery has been severe, and the projections are that Canadian taxpayers will be paying this bill for some time to come.”

In contrast, Norway had the best overall performance according to the COVID Misery Index. By combatting the virus efficiently, Norway succeeded in protecting the health and overall wellbeing of its citizens. Norway also tops the list of countries in terms of economic performance. Its balanced approach, combined with a substantial sovereign wealth fund, enabled Norway to weather the storm.

On the other hand, Spain clearly struggled, having the most overall misery out of all the countries measured. Extremely high mortality and an overburdened health care system contributed to significant misery for Spain. Failing to manage the pandemic has also led to grave economic consequences, with Spain clearly at the bottom in terms of economic misery.

According to Audas, “MLI’s COVID Misery Index is the only tool to comprehensively measure and compare the short- and long-term consequences to human wellbeing during this challenging time.”

“We hope that our index will allow Canadian and global policy-makers to appreciate the consequences of their policy decisions, and learn from peer countries with shared experiences.”