Canada should stand on guard in the post-COVID Era: Richard Shimooka for Inside Policy 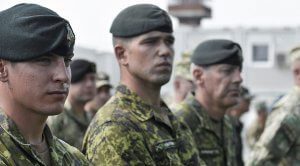 The world is becoming increasingly unstable and military force may be required to ensure this country’s security and prosperity, writes Richard Shimooka.

In the past year, the COVID-19 pandemic caused significant dislocations to Canadian economy and society. However, as we look to the international sphere, the pandemic has accelerated a number of long-standing trends, while introducing several new challenges. Over the past decade, we have witnessed the fragmentation of political, economic and military arrangements that underpinned the rules-based international order that emerged in the aftermath of the Second World War. In its final iteration, this order was defined by the promotion of such liberal political values as freedom of expression, poverty reduction and democracy promotion.

That impulse seems to have run its course, however. The post-Cold War consensus has broken down, driven in part by the growing assertiveness of national actors in international relations. Several powers, such as Russia, China and Iran, have rejected or worked to usurp this US-led international order. The fraying of the post-Cold War consensus has also occurred among close allies, where populism and nationalism have emerged as a powerful and disruptive force. Their growth is variously blamed on historic lows in public trust of governing institutions, declining economic prospects, and rapidly changing societies. Manifestations include populist presidents such as Viktor Orbán in Hungary, Jair Bolsonaro in Brazil and Donald Trump in the United States, as well as the rise of the Five Star Movement in Italy.

One of the clearest indications of this emerging era of global power competition is evident in the military sphere. Over the past decade, a dramatic modernization effort has been undertaken by major military powers, encompassing increases in funding, reorientations in force postures, and the fielding of new capabilities. The breadth of technological advances arguably sets this period apart from earlier eras, and some, like artificial intelligence, will affect the fundamental nature of warfare itself.

Collectively, these technologies have increased the lethality and potential ways to apply force. Many are vast improvements over existing systems or have no preceding analogue. These technological developments are not strictly limited to military-kinetic issues – they also affect our political, economic and social systems, such as with cyber capabilities. Perhaps one of the more problematic aspects of this emerging military reality is the lack of norms around these new technologies, which may result in greater instability. For example, China plans to become a world leader in AI technologies by 2030, and has shown few qualms in harnessing developments to support its national aims.

The COVID-19 pandemic has further undermined public trust in the governance structures of Western states – a fact exacerbated by disinformation campaigns conducted by foreign powers. This is evident with major protests and civil unrest surrounding public health measures, and the rise of violent far-right movements in many countries.

Moreover, a state’s emergency economic response to the pandemic has saddled many with large debt loads, which will require decades of austerity measures to eliminate, thereby limiting their ability to address domestic and foreign challenges. The challenges are particularly acute for developing states, which are less well-equipped to handle the economic and political consequences of the pandemic. They face a weakened global trade system, and the growing risk of political fragmentation due to the same forces affecting developed countries.

Thus, in the aftermath, many states will adopt a strong domestic focus to rehabilitate their economies and societies. This is evident in Canada’s southern neighbour, where the Incoming Biden administration has already highlighted their immediate need to focus on the domestic issues upon entering office. From his victory speech several weeks ago, the President-elect stated his plan to “restore the soul of America, to rebuild the backbone of this nation, the middle class, and to make America respected around the world again. And to unite us here at home.”

In foreign affairs, the President-elect was clear: he believes diplomacy is the primary foreign policy tool for the US and intends to work through alliances and international institutions. While his administration will likely provide greater global leadership than its predecessor, this also means that Canada and other allies will need to shoulder an increasing burden for international security, despite facing the same economic and social challenges as the US. At the same time, they will be less able to rely on multilateral institutions that have suffered significant legitimacy and credibility issues as a result of the pandemic. Nowhere is this more evident in Europe, with the suspension of the Schengen agreement for borderless travel, though it also extends to the World Health Organization and the UN.

The Canadian Armed Forces (CAF) will likely experience greater foreign demands in the coming years, as weak states succumb to the centrifugal pressures created by the difficult economic and political environment, with fewer developed states willing to assist in stabilization efforts. The nature of these conflicts also poses significant risks to the CAF.

The proliferation of new technologies and capabilities will greatly complicate Canada’s ability to intervene as well. The conflict in Nagorno-Karabakh showed how relatively modest unmanned aerial vehicles (UAVs) can have decisive consequences on the battlefield. Particularly concerning is their low cost – Armenia and Azerbaijan are relatively modest economies and could easily afford to field these novel capabilities.

Moreover, it is not just the low-end conflicts that the CAF must prepare for. As we can observe, China has thus far weathered the pandemic in a better condition than most other developed economies, posting a positive economic growth rate for this year. Meanwhile the Russian Federation has continued to play a spoiler role internationally despite suffering the pandemic’s effects. Thus, the challenges great power conflict will likely become increasingly acute as the decade wears on. Considering these new capabilities and the CAF’s lack of an effective response to them, Canada’s ability to operate in even a moderately threatening environment is questionable.

To respond to these challenges, the CAF must become increasingly nimble in how it responds to them – nowhere more so than in how it acquires and incorporates these new technologies. The 2017 defence policy statement, Strong, Secure, Engaged, is far too rigid in this age of rapid technological development. It set out a 20-year timeline for force structure decisions and budgets, projections that are unlikely to remain valid even in the medium-term. Many systems also require quick iterative upgrades to maintain their fighting edge, which our government is not well suited to deliver.

The procurement system itself is severely hampered by an overly regulated oversight system that ensures project delays and cost overruns. These issues are exacerbated by the reality that successive governments have seen defence procurement as a vehicle to direct government money into domestic constituencies. This only causes further delays to procurements and diminishes the purchasing power of the defence budget.  The temptation to further exploit defence procurement for stimulus spending will be particularly acute given the severe economic challenges facing the country.

None of this suggests that Canada should act like a global policeman in every outbreak of violence. However, the trajectory of recent international trends, particularly after the pandemic, suggests that the world is becoming increasingly unstable, and that military force may be required to ensure this country’s security and prosperity. Canadians must be clear-eyed as to the challenges they face, and the country must possess the appropriate tools to address them.

Richard Shimooka is a senior fellow at the Macdonald-Laurier Institute. This article is from the author's testimony at the Standing Committee on National Defence on November 27, 2020, and is based on his recent MLI report “After the Pandemic: Confronting a New Geo-Strategic Environment in the Post-COVID-19 Era.”