Canada Must Stop All Military Collaboration With China: J. Michael Cole In iPolitics 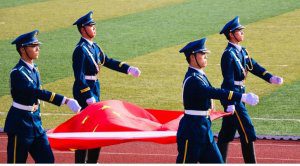 No other country in the entire Indo-Pacific has implemented a military posture as offensive and destabilizing as China, writes J. Michael Cole in iPolitics. Below is an excerpt from the article, which can be read in full here.

Recent revelations that Global Affairs Canada pushed back against a decision by the chief of the defence staff to cancel winter military exercises on Canadian soil with the People’s Liberation Army in 2019 show that Ottawa still engages in wishful thinking about China. This refusal to face reality could harm Canada’s reputation among other democracies that are now choosing to stand up to authoritarian aggression.

Global Affairs and the Prime Minister’s Office have yet to get the memo about what China has been up to. Thankfully, others have, and chief of the defence staff, Gen. Jonathan Vance, who made the call to cancel the training exercise, is among them. Those of us who have attended the annual Halifax International Security Forum (HISF) and have heard him speak there know that Vance is a strong supporter of close military co-operation among democracies. (Needless to say, one will not find a single Chinese participant at HISF, which limits attendance to representatives from democracies around the world.)

Although this decision reportedly angered Prime Minister Justin Trudeau, Vance absolutely did the right thing. Over the years, China has built up and modernized a military that can now threaten all of Asia. Backed by the People’s Liberation Army (PLA), China has defied international law and orchestrated a hostile takeover of the South China Sea. It has violated contested waters in the East China Sea, initiated deadly clashes along the border with India, and, since September, it has routinely threatened neighbouring Taiwan with intrusions into its Air Defence Identification Zone as well as across a median line in the Taiwan Strait.

The PLA and other security agencies, furthermore, have played a key role in repressing minorities in Xinjiang and Tibet. Indeed, China’s military has used a constellation of firms over which it has influence to penetrate democratic societies worldwide.