Canada should remain in the arms business, but tighten the rules: New MLI Commentary 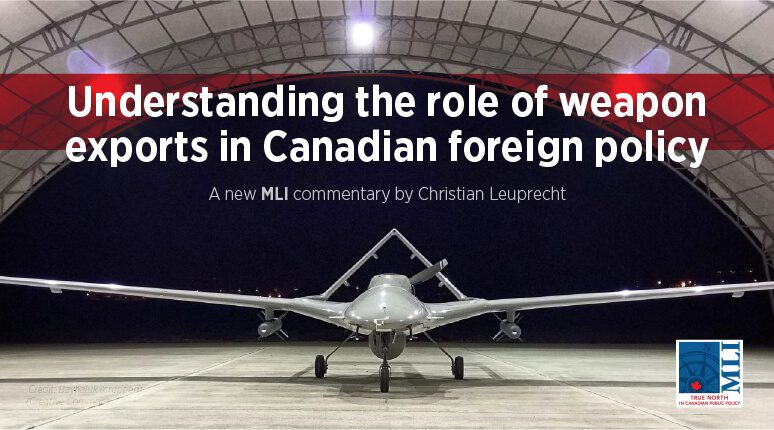 OTTAWA, ON (May 14, 2021):  Recent calls to limit Canada’s defence exports ignore important realities, including the major contribution our domestic arms industry makes to our defence and national security, to innovation and to jobs and the economy. In 2018, the Canadian defence industry contributed over $7 billion in GDP and generated almost 64,000 jobs across Canada.

But as MLI Senior Fellow Christian Leuprecht argues, that does not mean we should not have high standards and careful processes for deciding who can buy Canadian arms and under what conditions.

In a new MLI commentary titled “Understanding the role of weapon exports in Canadian foreign policy,” Leuprecht delves into how Canada engages in weapon and equipment exports. The author argues Canada should strive to be a leader in technological innovation when it comes to defence, which is the foundation of a vibrant and robust approach to national security.

Leuprecht also recommends a realistic outlook on what a fundamental change to Canada’s approach to arms exports could achieve. While Canada could throttle or cease arms sales, it would simply have no impact on the global arms trade. Instead, it would only drive purchasers to acquire services, technology, and arms from less scrupulous suppliers such as Russia. As Canada is also obligated to contribute to the security and defence of its allies and partners, it must maintain the capacity to do so via participation in global defence supply chains.

According to Leuprecht, “weapon exports are an instrument of foreign policy. They, and the conditions Canada attaches to their end use, give Canada some leverage.”

However, he also urges a cautious approach. The conflict between Azerbaijan and Armenia has revealed Turkey’s willingness to leverage Canadian-supplied equipment to destroy the status quo of the previously frozen conflict. That raises the spectre that Canadian defence technology could be used for purposes that may run counter to Canada’s and NATO’s interests.

Throughout 2020, Turkey had lobbied the Canadian government to issue an export control licence (ECL). At the time, arms exports to Turkey had been heavily scrutinized following Turkey’s incursion into northern Syria. Additionally, Turkey had been vocal in encouraging Azerbaijan to change the status quo by military means and offered support. Yet, in April 2020, Canada’s Minister of Foreign Affairs exercised discretion in approving the permit anyways.

As Leuprecht concludes, “Canada is no longer immune from sophisticated threats in a challenging world. Canada will be paying a very high price if it fails to pay attention.”

To learn more about the role of weapon exports in Canadian foreign policy, click the button below.

***
Christian Leuprecht is Class of 1965 Professor in leadership at the Royal Military College and Queen’s University, and Munk Senior Fellow at the Macdonald-Laurier Institute.