Canada’s Approach to Indigenous Issues - Now for Something Truly Radical: John Paul and Ken Coates in the Epoch Times 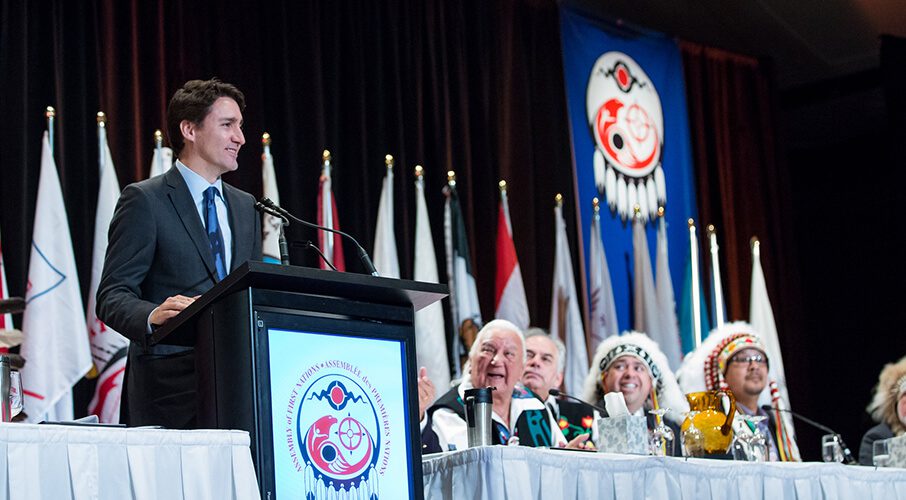 It’s time to lay to rest the pattern of paternalism and centralized control that has long characterized Indigenous policy in Canada, write John Paul and Ken Coates.

In the lead-up to the 2019 federal election, the Canadian “promise machine” is running at full tilt. All political parties are engaging in the routine exercise of enticing voters with their tax money, promising major investments and new programs.

Indigenous people in Canada have lived for generations in this fuzzy world of political promises and implementation challenges. Communities have received many billions of dollars in infrastructure investments and program spending without seeing the related improvements in quality of life and economic opportunities. The need for equity of services between Indigenous and non-Indigenous populations is a critical element of the reconciliation future.

It’s time to question the utility of a government-driven approach to Indigenous issues.

The federal government clearly has a role in Indigenous affairs—arising out of treaty, constitutional, and legal obligations—that must be maintained. Indigenous people in Canada, as Canadians, should have access to all of the basic services and infrastructure. Government should pay for education, health care, roads, water and sewage, fire protection, policing, and other services on an equitable basis. Indigenous Peoples’ right to this support is incontestable, but challenges in securing this support remain a major impediment to Indigenous efforts to improve the quality of life in their communities.

In other areas of Indigenous policy, communities need less federal government engagement and intervention, not more. Despite the Trudeau government’s precedent-setting commitment to Indigenous people in Canada, there are overtones of “Ottawa knows best” running through the national policy agenda. A fundamental transformation in mindset is required.

Indigenous people want control over the issues that most affect them. Communities don’t want the status quo of endless grant applications, routine reporting, and narrowly focused program spending. Indigenous authorities have proven that they are fully capable of managing their affairs across a wide array of issues.

It’s time to lay to rest the pattern of paternalism and centralized control that has long characterized Indigenous policy in Canada. Indigenous communities have the ability to become self-governing when they are ready. They do not need a barrage of new policy initiatives and promises. Rather, they need equitable, secure, and reliable funding, tied not to annual budgetary or political cycles but instead to demonstrated need.

Fifty years ago, Indigenous people were entrapped in a system of Department of Indian Affairs policies and Indian agent domination. Despite the government falling well short on basic issues, it could not resist the desire to tinker in social, cultural, economic, and other policy fields. Decades of battles chipped away at federal authority and brought about the gradual recognition of the rights of Indigenous people, communities, and governments.

Combine a long list of well-intentioned initiatives with the complexities of budgets and administration and the current reality becomes clear: Indigenous communities trapped in cycles of federal programs and reporting, which impose major burdens on the often small and chronically short-staffed Indigenous governments.

Here is the radical bit. Indigenous communities need less from the federal government, not more. The government needs to trust Indigenous authorities and must pass the appropriate financial resources down to them. The best decisions are made by local Indigenous governments on the ground. Accountability is not a problem. Most Indigenous governments are very transparent about the management of their funds; those that are not are subject to some of the most engaged forms of local democracy in Canada.

Few Canadians have noticed the dramatic rise in “own-source revenues”—money produced and controlled by Indigenous governments—and the use of these funds both to pay for the costs of these governments and to address local priorities. This demonstrates that the future lies in empowering Indigenous communities, not in emboldening an activist government. These Indigenous economic contributions have made a significant impact on the growth of the overall economy.

The federal government should not be let off the hook. It should focus on a narrow set of funding obligations: those set by treaty, by law, and by the need to ensure that Indigenous people have roughly the same quality of government services as that expected by all Canadians.

There are some tricky areas, like Indigenous housing, that address both urgent needs and politically and administratively unclear responsibilities. For the rest, the government needs to back off.

Indigenous people have struggled for generations with a government-intense approach to problem-solving. It does not work and will not work. Local empowerment is both cost-effective and impressive in terms of outcome. It’s time for the feds to allow appropriately funded Indigenous communities to manage their affairs as they see fit. A path forward to continue the economic contributions of Indigenous communities will be key for the future of those communities as well as Canada’s economy.

John Paul is the executive director of the Atlantic Policy Congress of First Nations Chiefs Secretariat in Dartmouth, Nova Scotia. Ken Coates is a Munk Senior Fellow at the Macdonald-Laurier Institute (MLI). They are the authors of the recent MLI publication titled “Moving From Toxic Dependency: A New Agenda for Indigenous Economic Empowerment.”