Standing guard, quietly: Why we need to talk more about Canada's defence of its European partners: Alexander Lanoszka for Inside Policy 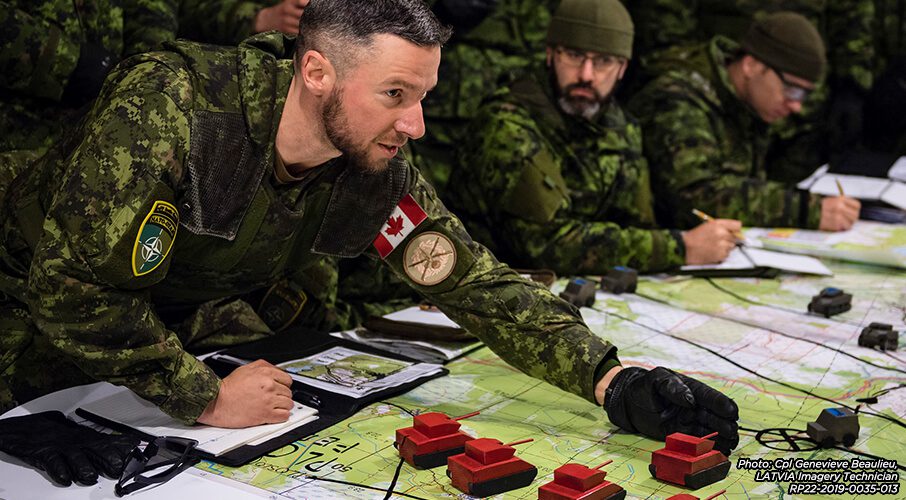 Canada has achieved a lot for European security, even if you would never know that from listening to either the Prime Minister or his rivals, writes Alexander Lanoszka.

In the rough-and-tumble of Canada’s 44th parliamentary elections, foreign policy has rarely come up as an issue. To the extent that it has, success seems to be in short supply. In the English-language debate, for example, opposition leaders criticized Prime Minister Justin Trudeau for having failed to secure the release Michael Kovrig and Michael Spavor from captivity in the People’s Republic of China. Conservative leader Erin O’Toole and the other federal leaders have also put Trudeau on the defensive about the numerous Canadian citizens and their Afghan allies trapped in Taliban-controlled Afghanistan.

Totally absent in these foreign policy discussions, minor as they have been, is one important success of which Canada can be proud: its positive engagement in the security affairs of allies and partners located between the Baltic and Black Seas.

One component to this engagement is Operation Reassurance. Intended to bolster deterrence and defence of NATO’s easternmost allies amid fears generated by the 2014 Russian annexation of Ukraine, the signature element of this operation is Canada’s leadership of the enhanced Forward Presence (eFP) deployment in Latvia.

Since early 2017, Canada has provided the military backbone of a diverse NATO Battlegroup made up of contributions from eight other NATO countries. As of writing, 540 Canadians form part of this Battlegroup, making it Canada’s largest military deployment abroad.

Although debatable whether Russia has ever wanted to launch a major attack against a NATO member, Canadian military and diplomatic personnel in Latvia have worked collaboratively with their local partners to counter Russian-led disinformation efforts that seek to undermine confidence in the eFP mission and NATO more broadly. Despite the highly multinational character of the eFP Battlegroup in Latvia, military units that rotate through it undertake a rigorous training and certification process so that they are as combat ready as they can be.

The other component is Operation Unifier. This mission centres on providing support to Ukraine as it confronts the hostile activities of Russia and includes the supply of non-lethal military gear as well as funding for projects relating to civil society promotion, economic stability and growth, security sector reform, and the rule of law. The main focus of Operation Unifier has been to contribute to the training of Ukrainian security forces. Almost 25,000 members of Ukraine’s armed forces have received some training through this mission.

Canadian leaders have been strangely quiet about these successes. At least in the two official debates, Prime Minister Trudeau missed the opportunity to take credit for them. Nevertheless, there is some room for improvement.

One area is to ensure these security initiatives get the attention and resources that they deserve. Some might argue that their success is due to how they are kept from the public eye. However, deterrence measures tend to be strongest if backed by high resolve and strong willingness. Too much discretion can suggest a lack of confidence. More importantly, prior to the COVID-19 pandemic, Canada’s defence budget had seen some increases but nevertheless remains low in comparison to other NATO countries.

Even though a major Russian assault is unlikely, the mission requires capabilities that cannot be neglected, including, among other things, electronic warfare and strategic lift. In the event of hostilities, improved electronic warfare is crucial to protect command, control, and communications assets against Russian efforts to disrupt them. Meanwhile, strategic lift remains critical given the sheer distance between Canada and Latvia. The challenges of evacuating Canadians and Afghan allies out of Taliban-controlled Kabul was also a stark reminder of the need to retain those lift capabilities and not be dependent on others for them.

Another area of improvement involves Canada expanding its defence support to Ukraine. In 2016, the Trudeau government had suspended the provision of Radarsat 2 imaging to Kyiv, apparently because of budgetary and bureaucratic reasons. Canada should make Radarsat 2 available again since it can help Ukraine acquire greater situational awareness. This asset would benefit Ukraine in light of the uptick in Belarusian-Russian military exercises next door and Russia’s military build-up near Ukraine in spring 2021.

One slight blemish on Canada’s record has been how its diplomatic support for Ukraine has not translated into NATO membership. Although Ukraine is now an Enhanced Opportunities Partner, its prospects for joining the Alliance remain dim as ever, not least because of the historic opposition of France and Germany.

Yet this obstacle should not be an excuse for an inaction. Canada already works with like-minded countries to attend to Ukraine’s security, whether it is through the Multinational Joint Commission (which coordinates training efforts alongside seven treaty allies and partners) or the Defence Reform Advisory Board (which oversees security sector reform in Ukraine). More can still be done, however.

Canada should take inspiration from how the United Kingdom has recently stepped up its own engagement with Ukraine, having agreed to help reconstitute its shipbuilding industry and naval capabilities in bilateral agreements concluded in late 2020. Ottawa and London have much in common when it comes to the importance they attach to Ukrainian security and their sense of threat from Russia. The two allied capitals should thus consider how they can partner even more.

Canada has achieved a lot for European security, even if you would never know that from listening to either the Prime Minister or his rivals. But however quiet that success might have been so far, there is still a lot of work that remains to be done.

Alexander Lanoszka is assistant professor of international relations in the Department of Political Science at the University of Waterloo and the Balsillie School of International Affairs. He is also an Ernest Bevin Associate Fellow at the Council on Geostrategy. His newest book Military Alliances in the Twenty-First Century will be published by Polity in 2022.