Why Canada’s Left is Wrong on Venezuela: Kaveh Shahrooz for Inside Policy 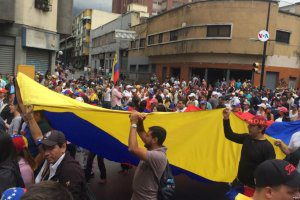 An action can be moral, even if it has Donald Trump’s support.

That may be an obvious point. But, when it comes to Venezuela, it is seemingly lost on Canada’s left-wing politicians and activists.

In recent days, mass protests against the socialist government of Nicolás Maduro have rocked cities across Venezuela. Tired of a government that has devastated their country through gross mismanagement, corruption, election-rigging, and human rights abuses – leading to over two million people fleeing Venezuela since 2014 – Venezuelans have risen up and are demanding an end to Maduro’s dictatorship.

Their uprising received crucial international support on January 23rd when the US, Canada, and several Latin American states recognized opposition leader Juan Guaido, the democratically elected head of that country’s National Assembly, as the interim president. The European parliament followed shortly thereafter. Many others have since extended the same recognition to Guaido.

Given their regular lip service to standing with the weak and disenfranchised, one would expect Canada’s federal NDP labour unions, and progressive intelligentsia to support Trudeau’s position. The Venezuela protests provided an easy opportunity to side with vulnerable protesters battling what Human Rights Watch has called “a devastating human rights, humanitarian, political, and economic crisis their government has created.”

And yet Canada’s left appears to have collectively failed this moral and political test.

Chiming in early, NDP MP Niki Ashton accused Trudeau of standing “with Trump’s regime change agenda” and demanded that Canada not “support an agenda of economic or military coups.” Her party’s leader, Jagmeet Singh, echoed that view, stating that “Canada should not simply follow the US’s foreign policy.” (Singh has since confused matters by refusing to indicate whom he recognizes as Venezuela’s president, which puts him at odds with his own party, which backs Maduro.)

Elsewhere on the left, the Canadian Union of Public Employees claimed Maduro was “duly elected by the people of Venezuela” and rejected “any attempt by the Canadian government to interfere” in Venezuela’s affairs. The Canadian Labour Congress did the same. And Naomi Klein, the high priestess of the Canadian left, tweeted that support for Guaido constituted “supporting a coup.”

These views are consistent with the left’s decades-long infatuation with Venezuela’s so-called “Bolivarian Revolution.” Noam Chomsky, for example, was breathless in praising Hugo Chavez. Filmmaker Oliver Stone went so far as to make a propaganda film celebrating Chavez’s legacy. And the UK’s Labour Party leader Jeremy Corbyn refused to criticize Maduro even when Venezuela’s security forces killed democracy protesters in 2017.

But looking past the slogans, one immediately sees the problems with the left’s position.

First, consider their use of the word “coup.” Is it a coup when hundreds of thousands take to the streets peacefully to demand their rights? Can it rightfully be called a coup when the protesters are looking to oust an illegitimate leader who was chosen in elections widely viewed as rigged by his own citizens and the international community? And it is surely an unusual coup when the military vows to uphold the existing structure. The truth is there is no coup. What is playing out in Venezuela is much closer to a popular revolution, something ostensibly supported by the left.

There is, of course, a legitimate debate to be had about the wisdom of the US’s adoption of a recognition strategy that lacks a solid basis in the Venezuelan constitution. Reasonable people may, for example, disagree on whether non-democratic countries can hereafter adopt the same approach with respect to US allies (or even the US itself.) But that debate, which would need to consider matters of domestic Venezuelan law and precedents in international law, is a complex one; far more complex than the current “coup” sloganeering of the left.

Secondly, think about what the comments by Niki Ashton and others leave out: the people of Venezuela. Focused entirely on the narrative of a US-orchestrated coup, Ms. Ashton and her allies miss the hundreds of thousands risking their lives in the streets of Caracas and elsewhere. In this patronizing worldview, these protesters have no personal or political agency and are misinformed about who is oppressing them. They apparently need Ms. Ashton and Ms. Klein to tell them that they are merely the playthings of the imperialist West.

Finally, consider the argument that Canada would be maintaining independence in its foreign policy by continuing to recognize Maduro. What the argument leaves out is that doing so would only place our foreign policy in line with that of China, Iran, Turkey, and Syria.  Given Russian support of Maduro, why is it any more independent for Canada to toe Moscow’s line? There is no neutral position on this issue; Canada either stands with the democracies, or the dictatorships.

The left is admittedly right about one thing – there is a significant inconsistency between Canada’s talk about human rights in places like Venezuela and our selling of arms to dictatorships like Saudi Arabia. But from this legitimate premise, Canada’s left derives precisely the wrong conclusion. Rather than encouraging Trudeau to apply to Saudi Arabia the same standards he is applying to Venezuela, they call on him to ignore the human rights crisis in Venezuela, much as he does with the Saudis.

The Venezuelan regime may soon crumble, hopefully to be replaced by a democracy. If that comes to pass, its support for a decaying dictatorship will be a dark stain on the history of Canada’s left. And in allowing their legitimate opposition to Trump cloud their judgement on this issue, they will have no one to blame but themselves.