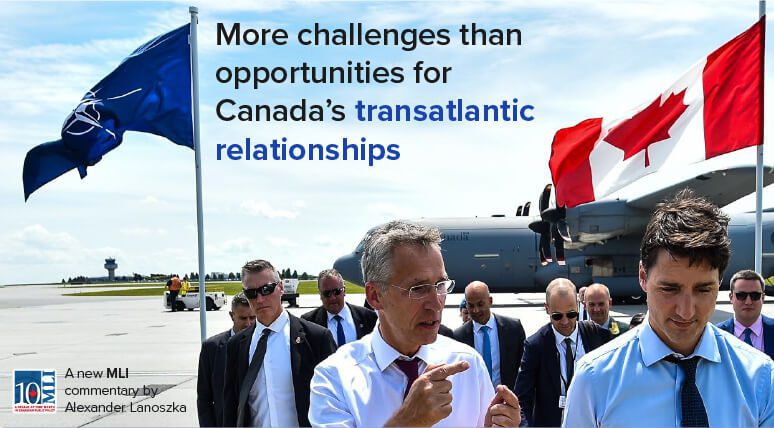 Ottawa, ON (December 15, 2020): As 2020 comes to a close, the transatlantic community can collectively breathe a sigh of relief. The incoming Biden presidency could signal the start of a more cooperative and consultative period in transatlantic relations. But that does not mean there are no challenges ahead.

In a new MLI commentary titled “More Challenges than Opportunities for Canada’s Transatlantic Relationships,” Alexander Lanoszka explores what the future holds for Canada’s transatlantic relationships as we transition to the post-Trump era. While a Biden presidency may offer some relief, this does not mean that tensions and controversies will not be in the offing.

“[M]atters of deep contention like trade will persist in transatlantic relations during the Biden presidency,” notes Lanoszka. In addition, “the United States has been steadily prioritizing the Indo-Pacific over Europe. The Trump administration has only sought to deepen that commitment and the trend will likely continue during Biden’s presidency.”

Both issues will likely create challenges for Canada’s approach to finding a renewed transatlantic role. Protectionist impulses are unlikely to recede in the United States. Canadian decision-makers are also more comfortable in the North Atlantic policy space, meaning that the continued US focus on the Indo-Pacific may “pose certain difficulties for them.”

According to Lanoszka, “Canada will face a number of conflicting challenges such that it will likely muddle through in transatlantic relations while taking shelter from some of the deeper political controversies that might roil Europe in the coming years.”

The United Kingdom and France will be wrestling with their own internal challenges alongside the incoming Biden administration. With its propensity for multilateral diplomacy and cooperation, Germany is also a natural ally to Canada. But, as Lanoszka writes, “claims that these countries are able to ‘defend’ the international order may just be overstated if these countries are hamstrung in their operational readiness and ability to undertake military missions.” Questions can also be raised about both countries’ willingness to confront what will be the world’s biggest challenge, China.

“None of these questions are easy; the answers partly depend on what Canadian policy-makers want to achieve,” adds Lanoszka. “But thinking through them at least would be a good step to get as much as a handle on the transatlantic relationship in the years to come.”

Alexander Lanoszka is Assistant Professor in the Department of Political Science at the University of Waterloo and the Balsillie School of International Affairs. His research addresses alliance politics and military strategy, with a regional focus on Europe.