Is the Canadian Government Prepared to Stand up to Beijing? Margaret McCuaig-Johnston for the Prospect Foundation 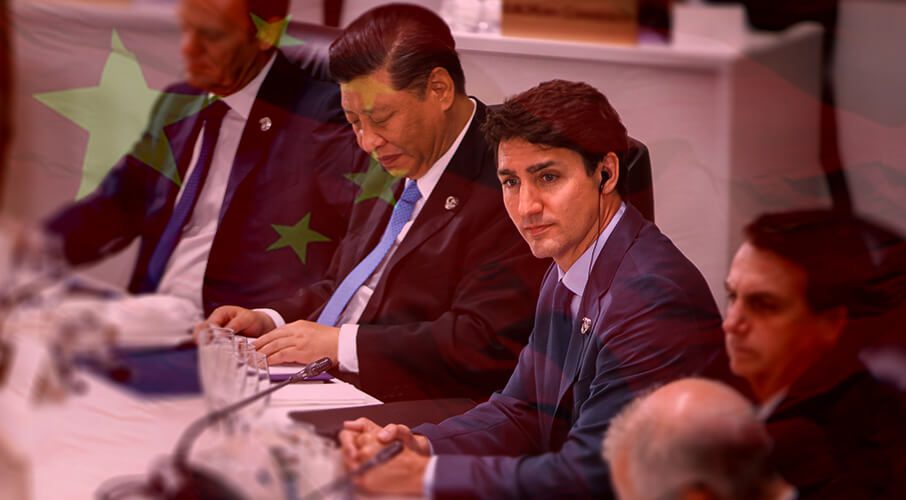 It is clear that Canada must develop more courage and stand shoulder-to-shoulder with other liberal democracies to confront Beijing’s aggression. Canada needs more resolve on matters related to Taiwan, writes Margaret McCuaig-Johnston.

This article was initially published by the Prospect Foundation, and is being republished here with permission.

Since December 2018, Canada’s Liberal Government has faced a China it did not recognize – one that detained two Canadians apparently in retaliation for the lawful arrest of Huawei executive Meng Wanzhou, and put execution sentences on four more. In case Canada had not gotten the message, China also blocked shipments of canola, pork, beef, peas, soy and other products.

This would have come as a shock to Prime Minister Justin Trudeau, who had had warm feelings about China since he visited as a child with his father Pierre Trudeau when he was Prime Minister. His first official visit to China as PM in 2016 was successful, and though his plan for a progressive Free Trade Agreement with labor, gender and environmental standards was rebuffed in December 2017, Canada-China relations remained generally positive.

But with the detention of Canadian citizens and the trade bans, the Trudeau Government became risk averse, not wanting to take actions that might make things worse. Departmental initiatives that might be interpreted as a slight to China were cancelled, and a federal decision on Huawei in Canada’s 5G system was “under review” for three years, even as allies rejected it. The one strong note the Government sounded again and again was its refusal to release Meng, as this would abrogate rule of law and Canada’s extradition agreement with the US.

The Fall 2019 election saw the Liberals reduced to minority government. The other political parties worked together to compel Parliament to form a Special Committee on Canada-China Relations, which called witnesses regarding the decline in the relationship, the repression of the Uyghur people in Xinjiang, the put-down of Hong Kong’s democracy, and other urgent issues. It published a particularly strong report on the situation in Hong Kong.

In addition, the Subcommittee on Human Rights of the Parliamentary Committee on Foreign Affairs and International Trade undertook a review of the plight of the Uyghurs and other Turkic Muslims in China. The Subcommittee heard from Uyghurs who had fled the region, former detainees, the families of detained individuals, non-governmental organizations, academics and human rights experts. Its report lays out, in devastating detail, crimes against humanity, including forced sterilization, the separation of families, detention in concentration camps, forced labor, enforced disappearances, and the prohibition of religious practices. The report makes fifteen recommendations including pressing for independent observers, banning products made with forced labour, compelling companies to respect human rights, expediting the immigration of Uyghurs to Canada, and levying Magnitsky sanctions against officials responsible.

Most importantly, the Subcommittee called Beijing’s actions “genocide”, as defined in the 1948 Convention on the Prevention and Punishment of the Crime of Genocide. The Prime Minister’s own Special Envoy on Preserving Holocaust Remembrance, former Minister of Justice Irwin Cotler, advised that it is genocide and called for Magnitsky sanctions. He was joined by more than 50 global experts in human rights.

Conservative Party Foreign Affairs Critic Michael Chong proposed a Motion in Parliament that China’s actions in Xinjiang meet the definition of genocide. Would the Cabinet take a step that Beijing would interpret as anti- China? The vote was held February 22, and only one Cabinet member, Foreign Affairs Minister Marc Garneau, appeared in Parliament to vote. The Minister abstained, indicating that he was abstaining on behalf of Government Ministers. But every other Member of Parliament voted for the Motion, 266-0. Since abstentions are not counted, Canada’s Parliament had voted unanimously that it is a genocide.

While the Cabinet’s abstention worked not to attract China’s criticism, it must be realized that Liberal Party MPs would have been given the go-ahead to vote their conscience, signalling that the PM and Cabinet too recognize that it is genocide. In addition, immediately after the vote, Foreign Affairs Minister Marc Garneau issued a statement saying that the Government remains deeply concerned by allegations of genocide in Xinjiang and calling for a credible international investigation. However, the public criticism of Cabinet members for abstaining reached a cacophony as Canadians objected to the Cabinet’s weak action on China.

Since the detention of Canadians in China, Canadian public opinion of China has hit rock bottom. Eighty-three percent of Canadians surveyed after the genocide vote supported or somewhat supported the motion, 62 percent feel Canada should work with the US to impose economic sanctions and an additional 14 percent think Canada should do so even without the US. Regarding the Olympics, 70 percent support or somewhat support moving the games out of China. Another survey found that only 14 percent of Canadians view China favorably, and 79 percent feel that respect for human rights and the rule of law should supersede trade and investment in Canada’s dealings with China.

The election of US President Joe Biden appears to be strengthening the Canadian Government’s resolve, given his commitments to human rights and working with allies. On March 22, a month after the genocide vote, Canada stood with the US, UK and EU in sanctioning four officials and one organization under Canada’s Magnitsky Act in response to China’s human rights violations in Xinjiang. For a Government that had been seen to fear China, this was a significant step in the right direction.

True to reactionary form, within days China sanctioned organizations and individuals in the EU, UK, US and Canada. But instead of targeting Canadian Ministers, it sanctioned the Subcommittee on Human Rights for its report on the Uyghurs as well as MP Michael Chong who had led the genocide Motion. Perhaps Beijing appreciated the abstentions or hopes for Meng’s release. Immediately, the Prime Minister and Minister Garneau issued statements calling China’s sanctions unacceptable.

The Canadian Government took one powerful step this year with its Declaration on Arbitrary Detention in State-to-State Relations, which now has 61 countries, plus the EU, agreeing to stand in solidarity against arbitrary arrest, detention or sentencing. Within weeks, we saw the diplomats of eight other countries stand with Canada’s outside the courthouse where Michael Spavor was on trial for only two hours—evidently there was no actual evidence against him or it would have taken far more than two hours to review it. Days later, the diplomats of 23 countries stood shoulder to shoulder with Canada’s diplomats outside the courthouse for Michael Kovrig’s trial, again less than a day.

These have been strong actions on Canada’s part, after more than two years of avoiding any action to which Beijing might object. That is why Canadians were shocked, hugely disappointed, and angry when the news emerged on April 11 that the Canadian Government was trying to block a move on the part of the highly influential Halifax Security Forum to award President Tsai Ing-wen with its John McCain Prize for Leadership in Public Service – an award that is richly deserved by Taiwan’s President. It is “given to individuals from any country who have demonstrated uncommon leadership in the pursuit of human justice.” While the Forum is funded in part by the Government of Canada, it is an independent global organisation.  If Canada pulled its funding, it would deserve the transfer of the Forum to another country.  Social media in Canada blew up with the news.  In response, Parliament voted unanimously on April 14th that President Tsai would be an ideal candidate for the prize, and the Prime Minister committed that Canada would continue to fund the Forum.  It was a serious misstep, brought to ground when the Government realized where the vast majority of Canadians now stand.

Looking ahead, the June G7 meeting will include Australia, South Korea and India to constitute a “D-10” of democracies working together to develop strategies and alternatives to stand up to China. It is clear that Canada must develop more courage and stand shoulder-to-shoulder with other liberal democracies to confront Beijing’s aggression.

Margaret McCuaig-Johnston is Senior Fellow, Institute for Science, Society and Policy, University of Ottawa. She is also a frequent author for the Macdonald-Laurier Institute.