Why was the CBC not in Afghanistan? Peter Menzies in the Line 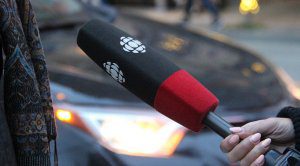 Our public broadcaster has the responsibility to be the organization that keeps Canadians informed of major international events when all others fail, writes Peter Menzies in the Line.

More than 20 years ago, the Calgary Herald broke up the summer news doldrums by running a two-page spread from a freelancer who had recently been to Afghanistan.

His name was Arthur Kent and, like his brother and former cabinet minister Peter, he had built a solid reputation as a journalist. Some may recall that he was, ridiculously in retrospect, dubbed the Scud Stud for his work covering the 1991 Gulf War. His father, Arthur Parker Kent, had retired 30 years previously as associate editor of the Herald, which was also where Arthur Jr. had got his first job in a newsroom. As editor-in-chief of the Calgary Herald, I was happy to have Arthur, who at the time was living in London, U.K., write for the paper. And he seemed to equally enjoy the serendipity of it all.

Kent’s piece warned that the West was ignoring Afghanistan at its peril and I will never forget him telling me that “there are some very bad people there and they are planning to do some very bad things” or words to that effect.

Weeks later, on September 11, 2001, the world came to a standstill. As Kent had forewarned, bad men had indeed done some very bad things. Afghanistan was invaded by a Western military coalition and Canada was at war. Kent, armed with a satellite phone, was there with the first wave of troops. I have no idea how or with whom he got in, but in the weeks that followed he would file commentary when he could and from God knows which mountaintop.

That story came to mind when the Taliban retook control of Afghanistan and all those who had assisted NATO forces for the past two decades, fearing for their lives, tried to flee. To the best of my knowledge, not a single Canadian staff reporter for a Canadian news organization was on the ground to tell the story. We seemed to lack even dedicated stringers — freelance journalists on the ground who work for international outlets when major stories break abroad.

Kent’s brief liaison with the Herald illustrates how much news organizations have changed. Twenty years ago, newspapers had discretionary spending resources and editors could make decisions with a measure of independence. Certainly the end of all that was beginning, but the halcyon days endured. Given all that has occurred in that industry since, there’s no point in beating up on newsrooms that can’t afford a reporter to cover city hall let alone to send one into war zones halfway around the world.

The Line, through the work of Kevin Newman, has come as close as any Canadian media outlet to illustrating the reality of Kabul’s fear and betrayal. A former Global news anchor connected to people helping evacuate interpreters and others, his posts have come as close as any to actually being there. That said — and not to take anything away from his work or the ingenuity of others conducting digital interviews — no amount of second-hand reports can replace boots on the ground.

Getting into Kabul now is near-impossible. As the violence and death toll mounts, news organizations have begun to withdraw. But at least until late last week, all the main American media organizations were in Kabul, even PBS. Earlier this week, I watched a video posted by the Los Angeles Times of the Taliban checking out abandoned coalition aircraft. The BBC’s chief international correspondent, Canadian Lyse Doucet, was there with her team. The Australians were there, as were many others.

But Canada had no one. Not even the CBC/Radio Canada.

Chuck Thompson of their public affairs bureau said that CBC News was planning a trip to Afghanistan over a month ago. Correspondent Susan Ormiston was slated to lead the coverage. But the network cancelled at the last minute due to security and safety concerns. “As we grew closer to deploying Susan and the crew to the region, it quickly became apparent the Taliban were taking over the country at an unexpected pace. Given those circumstances, we could not guarantee our team’s safety or be assured we could get them out of the country after their arrival.” Ormiston is now covering the story from Pakistan.

Every outlet has to make hard decisions about risk tolerance. However, in this case, the CBC was, evidently, not willing to accept the same risks as other comparable media outlets. It's worth considering whether this decision would have been the same if CTV or Global had gone. There is, after all, a domino effect to a lack of journalism resources.

We have seen this sort of thing happen all across the country at the city hall and legislature level where, not long after one news organization pulls out, others — instead of taking advantage of their absence — prefer to simultaneously cut costs and pull back themselves.

Regardless, the CBC is a taxpayer-funded outlet. It has a special responsibility to keep Canadians informed of major international events through a Canadian lens. It exists to ensure citizens understand not just what is going on in their own country but to assert the nation’s presence globally, and to view the world through Canadian rather than American eyes, which is largely what the public were left to do. Further, our absence was keenly felt during the early days of an election campaign dominated by Canada’s performance in Afghanistan. We had nobody on the ground to bear witness to the reports of chaos unfolding at the Kabul airport — and, thus, no one who was in an ideal position to challenge the government’s claims about its performance there.

Perhaps we should not be surprised by the shift in risk tolerance. At its license renewal hearing in January, a great many of the questions posed by the Canadian Radio-television and Telecommunications Commission (CRTC) panel of Commissioners were more concerned with diversity. There wasn't a lot about news gathering at all — other than the fact that it should better reflect diversity.

This focus on diversity certainly worked. Last week, at the height of the story in Kabul, Brodie Fenlon, CBC’s head of news, posted a lengthy editor’s blog taking a deeper dive into diversity and how the CBC is all about that. Charts detailing demographics are included and while you may have known that close to 60 per cent of the Mother Corp’s full- and part-time journos are women, I’ll bet you didn’t know that, when it comes to race, 36 per cent of full time and 49 per cent of part time reporters identify as “unknown.”

There may well be other complexities I have overlooked. All I know is that as the last Canadian flight left Kabul and those it left behind stared in horror at its contrails, we weren’t there. We hadn’t been there at all.