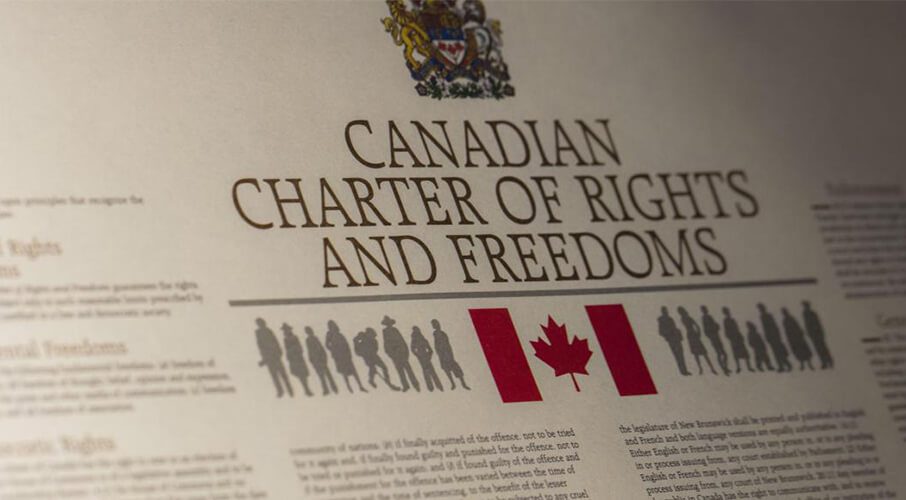 We will diminish the scope of our admired Charter of Rights and Freedoms if we don’t make better use of the less familiar rights in Section 2, write Brian Bird, Dwight Newman, and Derek Ross. This article was originally published on Policy Options.

In April, the Canadian Charter of Rights and Freedoms turned 38 years old. The Charter, which forms part of our Constitution and thus part of Canada’s supreme law, is widely celebrated by Canadians. It is fair to say that the Charter has, with age, also come to form part of our national identity.

Despite Canadians’ appreciation of the Charter, many are not intimately familiar with its contents. This can suddenly change when we believe that the government has wronged us and recourse to the Charter becomes necessary. Dramatic events can also call our attention to the Charter. COVID-19 has reminded us that the Charter guarantees certain rights that we might take for granted, such as the right to peacefully gather in person and the right to enter, leave, and move about the country to earn a livelihood – subject, as all Charter rights are, to justifiable limits.

While we should not expect Canadians to know the Charter by heart, it is surprising that after nearly four decades of its existence there is an entire portion of the Charter that has largely gathered dust. It is even more surprising that this portion of the Charter is the set of civil liberties labeled in the text as “fundamental freedoms.” The truth is that most of these fundamental freedoms could properly be called “forgotten freedoms” in light of their legal underdevelopment and the lack of attention paid to them.

Section 2 of the Charter states that everyone has the following fundamental freedoms:

(a) freedom of conscience and religion;

(b) freedom of thought, belief, opinion and expression, including freedom of the press and other media of communication;

(c) freedom of peaceful assembly; and

Some may be surprised by the claim that section 2 of the Charter has been forgotten. Indeed, some of these freedoms are litigated frequently and have been the subject of extensive judicial consideration and academic commentary. Freedom of religion and freedom of expression are examples. However, the other interests protected by section 2 have been largely ignored. Freedom of conscience has been paid minimal attention by the courts, and the freedoms guaranteed alongside freedom of expression – thought, belief, and opinion – are also nearly invisible in our jurisprudence. Freedom of the press and other media of communication have been overlooked as standalone protections. As for freedom of peaceful assembly and freedom of association, the former has scarcely appeared in court decisions and the latter has puzzlingly been restricted to the labour context.

What explains the obscurity of many of the Charter’s fundamental freedoms? An optimistic theory is that attention is only paid to civil liberties in a bill of rights if those liberties are curtailed by governments. This theory would suggest that these fundamental freedoms are more often than not respected by the state, such that they need not be defended in court.

Though there is certainly some truth to this theory when speaking of a robust liberal democracy like Canada, it is hard to reconcile with the abundance of litigation over a select few of the fundamental freedoms. Is it really the case that government is far more inclined to interfere with freedom of religion and freedom of expression than the other fundamental freedoms? We think not. It is more plausible that the reasons why the fundamental freedoms have by and large been forgotten are more numerous and nuanced than the notion that these freedoms are routinely respected by the state.

One of these reasons may be the result of litigation strategy. Where a case might fit more cleanly into the category of freedom of conscience but could also be handled via freedom of religion, it is unsurprising that litigants may make their claim within a more familiar Charter right that courts have regularly interpreted rather than invite the court to break new legal ground. The same could be said for freedom of thought, belief, or opinion. Claimants, lawyers, and judges are likely inclined to be cautious and to use freedom of expression, a tried and tested Charter right, wherever it is possible to do so.

However, this approach – focusing on freedoms that are well-developed, and under-emphasizing those that are not – may ultimately diminish the content of the Charter, and the scope of what it was intended to protect. While all of the fundamental freedoms are inter-connected, they are distinct and protect unique interests, each of which merits discrete consideration. As the Supreme Court noted in 2015 with respect to freedom of association, the fundamental freedoms are not “derivative” of one another – rather, each freedom must be recognized “as an independent right with independent content, essential to the development and maintenance of the vibrant civil society upon which our democracy rests.” If we fail to unpack the “independent content” of each freedom, we risk devaluing their distinct contributions to a “free and democratic society” – the standard that the Charter sets out for Canada.

Each of the freedoms in section 2 was deliberately included in the Charter and deemed fundamental by its drafters because they believed each of these freedoms plays an independent and necessary role in the realization of a free and democratic society.

In a 2009 decision, Justice Louis LeBel of the Supreme Court invoked this idea. He noted that the drafters of the Charter specifically included freedom of religion in the document even though, taken together, “freedom of opinion, freedom of conscience, freedom of expression and freedom of association could very well have been sufficient to protect freedom of religion.” The inclusion of religious freedom, in his view, means that this form of freedom “must be given meaning and effect.” The same is true for all the other fundamental freedoms. None is superfluous. Each of the freedoms in section 2 was deliberately included in the Charter and deemed fundamental by its drafters because they believed each of these freedoms plays an independent and necessary role in the realization of a free and democratic society.

Another danger of adjudicating one type of freedom through recourse to a related but distinct type of freedom comes into focus when government takes action that interferes unambiguously with the freedom that has been ignored. Recent litigation in Ontario over conscientious objection by physicians to providing referrals for procedures they deem immoral or unethical was almost exclusively treated by the courts as a matter of religious freedom, even though the activity in question – as the term conscientious objection suggests – may be better captured by freedom of conscience. A recent decision on this issue by Ontario’s highest court declined to even consider arguments about freedom of conscience, focusing instead on religious freedom.

Certain fundamental freedoms have been hindered by under-definition, which leads to them being unavailable where they should naturally apply. While the Supreme Court has in recent years given reason to believe this may change, freedom of association has suffered this fate by being practically restricted to labour and union issues. The casualties are a wide range of associations in our society – charitable, political, cultural, social, and many others – that depend on this freedom but fall outside of the collective bargaining context.

In order to recover the forgotten fundamental freedoms, we must first become aware of their obscurity. Last September, a group of lawyers and legal academics met in Toronto to discuss these freedoms. The fruit of that meeting is a book on this theme that will be released later this year. An educational video series has also been produced, along with a special webinar, which was presented on the Charter’s 38th anniversary. These are the inaugural efforts of The Forgotten Freedoms Project, an initiative with which we are involved. The project is dedicated to raising awareness of underappreciated civil liberties in Canada.

We hope that this project will encourage other scholars to explore the history and content of forgotten freedoms. Most of all, we hope that various sectors of civil society will receive this knowledge and advance positions in the public square that enliven these freedoms.

But if this recovery effort is to succeed, awareness and advocacy will not be enough. Lawyers and judges must show courage by resolving Charter claims according to their proper Charter freedoms. It is tempting to use a Charter freedom that has amassed significant legal mileage even if it is not the best fit for the claim at hand. But that temptation can be resisted if we recognize what is at stake: fidelity to the Constitution, which professes our highest ideals and aspirations for Canada. Convenience and expediency are surely inadequate reasons to give any part of the Constitution, including the fundamental freedoms, short shrift. And if we neglect any of these freedoms, we inevitably cheapen the bedrock principle that binds them together: freedom itself.

It is therefore not enough that these freedoms be remembered. If Canada is to be the free and democratic society contemplated by the Charter, these freedoms must also live and breathe within our constitutional practice.

Brian Bird is a 2019-20 John and Daria Barry Postdoctoral Research Fellow in the James Madison Program in American Ideals and Institutions at Princeton University. Dwight Newman, QC is a professor of law at the University of Saskatchewan and is a Senior Fellow at the Macdonald-Laurier Institute. Derek Ross is a constitutional lawyer and executive director of the Christian Legal Fellowship, an intervener in the Truchon case and the CMDS CPSO litigation.

This article first appeared on Policy Options and is republished here under a Creative Commons license.