The China-India Nautical Games in the Indian Ocean – Part Two: Mohan Malik for Inside Policy 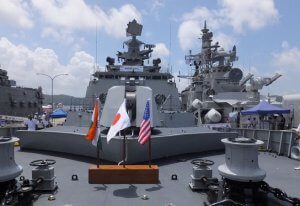 India and China are in the midst of a protracted rivalry, with microstates like the Maldives caught in the middle, writes Mohan Malik. Part Two of his article looks at Delhi’s options in the face of continuing Chinese encroachment in the Indian Ocean. (Click here for Part one.)

The Maldives is now caught in a tug-of-war between China and India. Both have strategic interests to protect. Both are jostling to gain the upper hand, but only one can emerge victorious from this crisis. Seeing the Maldives as a critical component of its Maritime Silk Road (MSR), China has developed strong investments in the Indian Ocean microstate and wants the autocratic ruler of this state, President Yameen Abdulla Gayoom – “China’s Man in the Maldives” – to stay in power.

China’s military and commercial links with Indian Ocean littoral states weave a “sharp power” web around India, making it politically costly for Delhi to take action detrimental to Chinese interests in the Indian Ocean. However, India does not want its southern neighbour to turn into China’s newest colony. Delhi would welcome the return of former President Mohamed Nasheed to power to shift the balance of influence back in its favour. So, how will India respond to the ongoing crisis in the Maldives? What are India’s options?

Given the Maldives’s proximity and strong historic ties, doing nothing is not an option. But no option is cost-free. Military intervention might end either in a quagmire or become politically costly for India’s long-term interests. Further, it would reinforce India’s image as a big, bad bully. On the other hand, a lack of action would greatly undermine India’s claim of being a “net security provider” in the Indian Ocean region, emboldening adversaries and disappointing friends who look to India as a strategic counterweight to China.

The possibility of an Indian military intervention cannot be ruled out. India has increased its naval presence in international waters about an hour from the Maldivian capital of Malé. But so too has China, with a bolstered naval presence that allows it to both intervene and evacuate. Chinese diplomats have made it known that Beijing stands ready to help Yameen if India tries to unseat him. However, given Beijing’s current limited naval capability in the Indian Ocean, a military offensive in the Himalayas would be a more realistic option should China decide to “teach India a lesson.”

India has increased its naval presence in international waters about an hour from the Maldivian capital of Malé. But so too has China.

Chinese strategic writings constantly remind India of China’s overall technological, economic, and military superiority should a combination of disputes – related to Tibet, Pakistan, disputed Himalayan borders, India’s energy exploration in the South China Sea, or the elbow-bashing in the Indian Ocean – snowball into an armed confrontation. If India backs off or otherwise acquiesces during any clash with Beijing, the small and weak states will quietly slide into China’s orbit and a new Sino-centric order will then emerge in the Indo-Pacific.

A clash of values and visions: Belt and Road Initiative versus the Quad

Beijing’s nod to the military coup in Zimbabwe in 2017 and support for the Maldivian and Cambodian regimes’ suppression of democracy reveal China’s willingness to intervene in the domestic affairs of other states if it perceives vital Chinese interests are at stake and if the costs of intervention are relatively low. China sees itself as being engaged in a long, protracted competition with India, Japan, and the United States, and would want Laos, Cambodia, Myanmar, Nepal, Sri Lanka, the Maldives, and Pakistan to remain within its orbit. Beijing also wants to send a strong message that countries along the Belt and Road Initiative (BRI) – which envisages a network of ports, railways, roads, and industrial parks linking China with Africa, Asia, and Europe – can look to China for both economic growth and military security, and that challenges to its expanding sphere of influence will no longer be tolerated.

Despite a growing chorus in India’s strategic circles for military intervention, the Modi government has thus far chosen a diplomatic pathway to pressure Yameen’s government to uphold the Supreme Court’s ruling and restore democracy. India has also asked the United Nations to send a fact-finding mission to the Maldives. However, with China, Russia, and Saudi Arabia blocking attempts to have the Maldivian crisis tabled on the UN Security Council’s agenda, the UN cannot be of much help.

India has, in turn, sought the support of the United States, Japan, and Australia to oust the pro-China Yameen from power through diplomatic, economic, and political means. The United States, with its own base south of the Maldives in Diego Garcia, shares India’s concerns about an autocratic regime heavily indebted to Beijing being manipulated to provide access to Chinese naval vessels. Regional concerns about Chinese behaviour regarding maritime disputes coupled with the PLA’s acquisition of expeditionary capabilities worsen the security dilemma, and result in balancing behaviour from China’s neighbors.

At the normative level, the Maldivian crisis challenges the resurrected Quad (comprising the United States, India, Japan, and Australia) and its quest for a rules-based “free and open Indo-Pacific.” The crisis highlights the need for a coordinated Quad response to prevent Chinese expansion. The Maldives’ fledgling democracy is, after all, yet another casualty of Emperor Xi’s megaproject. Evidence from Cambodia, Sri Lanka, Myanmar, Pakistan, Djibouti, and now the Maldives suggests that BRI-related investments undermine democratic institutions, increase corruption, restrict civil liberties, and favour autocratic and military rulers. Let us call it the “BRI collateral.” Wary of closer strategic alignment amongst democratic and maritime powers, Beijing seems in a hurry to lock in its economic, geopolitical, and institutional gains vis-à-vis rival India and other powers before China’s demographic and economic decline sets in.

The Maldivian crisis challenges the resurrected Quad (comprising the United States, India, Japan, and Australia) and its quest for a rules-based “free and open Indo-Pacific.”

Obviously, a broader contest of clashing values and visions between the Quad and BRI is going on, which requires a multilateral response at different levels to prevent democracy from falling like dominoes under the march of authoritarianism. One country’s response alone, whether that be from India or the United States, cannot deal with the ideological and strategic challenge from China. Hyper-nationalism, a belief in Han exceptionalism, and certainty about the inevitability of a post-American Sino-centric world now shape Beijing’s Asia policy.

Spellbound by the grandeur of sea power, Chinese strategic thinkers wax lyrical about resurrecting China’s fifteenth century naval expeditions to the “Western Ocean” (the old Chinese name for the Indian Ocean). China’s cultivation of friendly, pliant regimes via economic inducements and strategic coercion all along the maritime choke points in the Indian Ocean sea lanes is similar to the Ming Court’s past attempts to control the maritime lanes by changing political regimes in Malacca, Sumatra, and Sri Lanka so as to facilitate commercial and maritime dominance. Whereas the collapse of the Soviet empire led the West to declare victory and “the end of history,” the East saw Beijing resurrecting China’s imperial history.

Ironically, China’s quest for resources, markets, and bases following the direction taken by old imperial powers and attempts to establish an empire of “exclusive economic enclaves” run by Chinese conglomerates to usher in the age of Pax Sinica is now bringing former European imperial powers back in Asia. French and British navies are planning to operate joint task forces in the Indo-Pacific to maintain a rules-based international order, backed by South and Southeast Asian countries. Faced with the onslaught of authoritarianism, the Quad in the Indo-Pacific could well be reinforced by a Concert of Democracies (COD) comprising Canada and the European Union at the global level to uphold a rules-based order.

Whoever prevails in this geopolitical poker game will ultimately determine the future of the world order. In the meantime, the risk of miscalculation lies with the Chinese military overestimating its strength, and the rest of the world underestimating Beijing’s ambitions, power, and purpose. Absent a rules-based order, Asian giants will continue to jostle over the territory, resources, and allegiance of small states from the Himalayas to the Indian and Pacific oceans, and the so-called Pacific Century may then turn out to be just another bloody century in Asia.

Mohan Malik is a professor in Asian security at the Asia-Pacific Center for Security Studies, Honolulu, and is the editor of Maritime Cooperation in the Indo-Pacific Region (Rowman & Littlefield, 2014) and author of China and India: Great Power Rivals (Lynne Rienner Publishers, 2011). The views expressed here are his own.