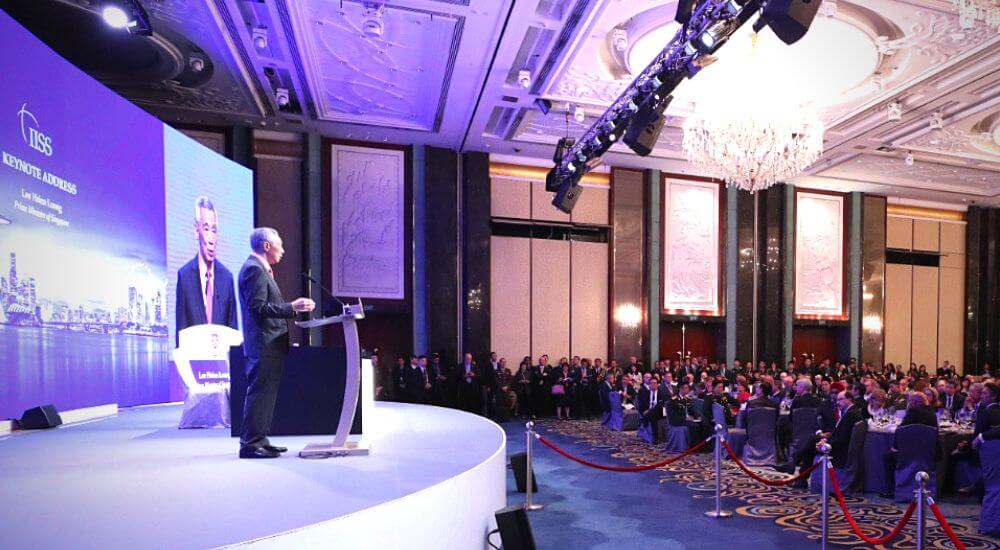 There is a broader sense, both in Washington and among many states in the Indo-Pacific region, that the U.S. and China are on an intractable course for a cold war, writes J. Berkshire Miller.

This weekend, Singapore will once again host — under the stewardship of the International Institute of Strategic Studies (IISS), the Shangri-La Dialogue (SLD).

The SLD is Asia’s key venue to convene senior government officials, active military brass, scholars and other professionals to discuss Asian security matters. The SLD has grown apace over the years and has evolved into a launching pad for countries in the region to roll out their defense and security policies.

But while the SLD has become a key forum for policy addresses, its most critical role is not during the plenary sessions but on the sidelines, where states conduct dozens of key bilateral (and “mini-lateral”) meetings on regional security issues. During prior sessions, the forum has provided a “chapeau” — for example — for trilateral meetings between the U.S., Japan and South Korea, and also dialogues with ASEAN (such as the ASEAN-Japan dialogues).

This year will be no different, with key bilateral meetings expected to take place — including a much-needed meeting between defense ministers from South Korea and Japan, two countries still recovering from a prolonged dispute over a radar-lock issue last December in the Sea of Japan.

This year’s SLD, however, comes at a challenging time with a rise in tensions between the United States and China. The administration of U.S. President Donald Trump has taken an increasingly hard posture against Beijing on trade, especially after the realization that China is not prepared to make substantive reforms to acquiesce to important U.S. concessions, such as its uninspired efforts to curb the theft of intellectual property or limit forced technology transfers.

Things have ratcheted up even more sharply with Trump’s decision, through an executive decision, to effectively ban U.S. companies from using Huawei products in their supply chain. The U.S. has also been vocally critical of the dangers of including Huawei in next generation 5G networks, and has cautioned its key allies and partners to consider the security implications.

All of this contributes to a broader sense, both in Washington and among many states in the Indo-Pacific region, that the U.S. and China are on an intractable course for a cold war. The regional environment in Asia, marked with geopolitical clash points for Beijing and Washington, such as disputes in the East and South China seas, has only further magnified the difficulty of the managing risks in the relationship going forward.

The U.S. is unambiguous now about the challenge that China poses to the rules-based order. The U.S. National Defense and National Security strategies, released last year, labeled China as a strategic competitor. According to the NSS, “China seeks to displace the United States in the Indo-Pacific region, expand the reaches of its state-driven economic model, and reorder the region in its favor.”

Language such as this is factually correct and few in Washington (or allied capitals in Asia) would disagree that China is attempting to re-frame the region based on its own rules and interests. But the China awakening carries risks, too. In Southeast Asia, countries remain anxious at the prospect of U.S.-China strategic competition and feel they are being placed in an unenviable position to choose between Beijing and Washington.

These concerns were on display during last year’s SLD, where states in the ASEAN region expressed relief that Modi’s keynote speech downplayed the notion of a great-power concert of interests in the region — ostensibly through the re-born Quadrilateral Security Dialogue made up of the U.S., Japan, India and Australia — and instead favored an ASEAN-centric approach to regional security going forward.

But while last year’s SLD was reassuring perhaps to those promoting the need for “ASEAN centrality,” the shifts in the U.S.-China relationship since that point may limit this in coming sessions.

One key area to watch will be the speech from acting U.S. Defense Secretary Patrick Shanahan, where he will look to outline the specifics of the U.S. Indo-Pacific Strategy and what it will prioritize. Shanahan’s speech will be particularly important because he is filling the shoes of former U.S. Defense Secretary James Mattis — who did a masterful job the last two years “holding water” for U.S. policy in the region despite persistent questions and concerns from regional stakeholders worried about U.S. retrenchment.

The other element to watch at this year’s SLD is the role of China, which has decided to send Defense Minister Wei Fenghe to make a key speech. The move is important because Beijing has not sent someone of this rank since 2011 and has traditionally attached less importance to the dialogue, which it sees as a venue for U.S.-focused regional security discussions. The dispatch of Wei likely indicates the level of concern that Beijing has with its relations with the U.S. and its need to respond in kind.

What are the implications here for Japan?

Tokyo has traditionally been an active voice at SLD, and that trend is likely to continue.

However, the most important moves by Japan at this SLD will likely not be at the plenary sessions — like in 2014 when Abe spoke to the audience — but rather on the sidelines, through key bilateral and multilateral meetings. In addition to the Japan-South Korea meeting of defense ministers, it is possible that countries making up the Quad — Japan, India, Australia and the U.S. — may take the opportunity for another meeting on the sidelines of SLD.

The larger context around U.S.-China ties is also crucial for Japan’s interests.

First, the Abe administration is just off the heels of a summit with Trump that was relatively successful and underscored the importance of the alliance. Despite a stabilization in relations with Beijing, Tokyo remains wary of China’s assertiveness in the region and is supportive of most of the criticisms Trump is levying on China regarding the need for more transparent and fair-trade practices.

Yet alongside Abe’s firm support of the U.S., is his tough balancing act of wanting to maintain a more nuanced approached to Beijing that incrementally improves ties, while still pushing back on Chinese assertiveness in the region.

An example of this is Japan’s proposal to relaunch high level diplomatic talks — or the so-called two-plus-two meeting of deputy ministers of foreign affairs and defense — as a potential deliverable during Chinese President Xi Jinping’s visit to Japan next month for the G20.

Abe also needs to ensure that a trade row between Washington and Beijing does not overshadow and diminish his efforts to pull off a successful G20 meeting — Japan’s first ever as host — ahead of the Upper House election in the summer.

J. Berkshire Miller is Deputy Director and Senior Fellow at the Macdonald-Laurier Institute. He is also a senior fellow at the Japan Institute of International Affairs.