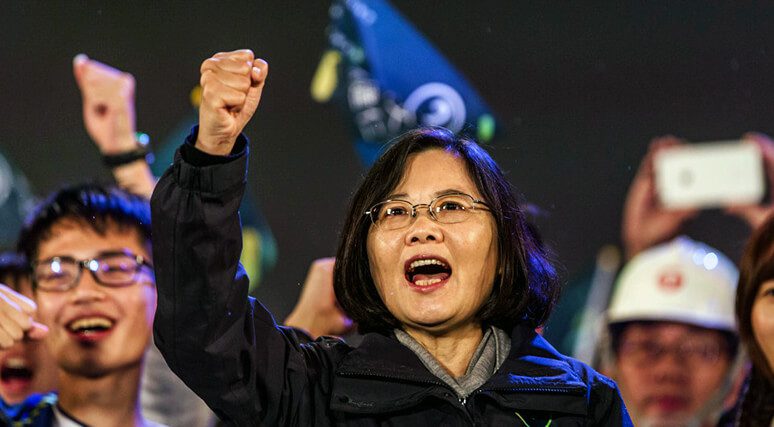 Rather than isolate Taiwan and Hong Kong, Beijing’s unwillingness to accommodate different political systems on its peripheries and its inability to do “soft power” effectively has had the opposite effect, writes J. Michael Cole.

Defying an approaching typhoon on Sept. 29, tens of thousands of Taiwanese — most of them young adults — took part in a rally in support of Hong Kong while several thousand others joined a similar event in the southern port city of Kaohsiung.

If Taiwan’s youth is more determined than ever to stand by its friends in Hong Kong, they have Chinese Communist Party (CCP) Secretary-General Xi Jinping largely to thank for that. Xi’s increasingly autocratic rule, which has had devastating effects on civil society, religion and intellectual pursuit across China, has only been surpassed in its self-defeating effects on Taiwan than his misguided Jan. 2 address to “Taiwanese compatriots,” in which he made it clear that “peaceful unification” is inevitable and that it would occur under one and one offer alone — that is, the “one country, two systems” formula, which as developments in recent months have shown us, is clearly breaking at the seams in Hong Kong.

Through its mishandling of the Special Administrative Region, the central government in Beijing has successfully alienated an entire generation of young people in Hong Kong. In the process of imposing a language, culture and ideology on the former British colony, the CCP has spawned that which it feared most: a pro-localization movement insistent on liberalism and democracy that feels sufficiently cornered that it will not back down. Months of repression — riot police, tear gas, water cannons, crime syndicates, thousands of detentions and a propaganda campaign orchestrated by Beijing and its proxies in the territory — has failed to break the movement’s back; in fact, it has had the opposite effect, emboldening a movement with very few identifiable leaders and a seemingly endless supply of young foot soldiers who do not fear being bruised or spending the night in a detention cell (more worrying are the disappearances and claims that some of the activists may have been raped while in jail).

And by dint of callous repression, the youth movement has gained the support of several sectors of Hong Kong society, not to mention, as the rallies held across cities worldwide on Sept. 29 tell us, a substantial lead in the battle for hearts and minds, a contest which the authoritarians in Beijing are ill-equipped to fight.

For the people of Taiwan, the violence with which the Hong Kong authorities have responded to the protests, and the inability of decision makers in the territory and in Beijing to make the kind of accommodations that would help defuse the tensions, has served as a stark reminder of why “one country, two systems” — or any other offer by Beijing — would never work in/for Taiwan. “Today’s Hong Kong is tomorrow’s Taiwan,” states one of the many slogans that emerged earlier this year.

Sensing danger as Taiwanese and Hong Kong societies began developing closer activism-oriented ties during Taiwan’s Sunflower and Hong Kong’s Umbrella movements in 2014 — here I urge readers who are interested in finding more about these dynamics to read Dr. Ho Ming-sho’s excellent book Challenging Beijing’s Mandate of Heaven: Taiwan’s Sunflower Movement and Hong Kong’s Umbrella Movement — Beijing has since imposed new restrictions on the ability of intellectuals, activists and officials from both sides to interact. Since 2014, a growing number of Taiwanese have been refused entry into Hong Kong. This includes academics who hitherto had never encountered such difficulties. And yet, despite those efforts, when a new round of protests hit Hong Kong earlier this year, this time over (initially at least) a controversial extradition bill whose passage the Carrie Lam administration was hoping to expedite, support from the Taiwan side was stronger than it had ever been.

And if Beijing’s hope in tightening controls on exchanges between the two societies was to isolate one from the other, them that, too, completely backfired: the escalating unrest in Hong Kong has given the CCP’s reviled nemesis, President Tsai Ing-wen of the Taiwan-centric Democratic Progressive Party (DPP), a much-needed boost in the polls against her opponent from the Kuomintang (KMT), Han Kuo-yu. So unpalatable was Xi’s only proposal for “peaceful unification,” in fact, that even the “Beijing-friendly” KMT had to publicly and explicitly state its opposition to “one country, two systems,” reaffirm the existence of the Republic of China (Taiwan) as a sovereign state where democracy is the rule of the game, and, later on, express support for a peaceful resolution to the impasse in Hong Kong. We can perhaps attribute this overt messaging to the fact that general elections will be held in Taiwan four months hence. Nevertheless, such declarations undoubtedly stem from the realization within the KMT that its electoral fortunes are tied to the embrace of those values in Taiwan. Beijing’s ham-fisted handling of the situation in Hong Kong has reinforced that contrast, and by doing so it is compelling even its supposed political partner in Taiwanese politics — the KMT — to openly side with those who clamor for greater, not less, political freedoms.

Meanwhile, the few voices within Taiwan that have sided with Beijing and the Lam government, such as the China Unification Promotion Party (CUPP) and the Taiwan Red Party, along with secret societies such as the Hongmen, have only contributed to their further marginalization by adopting the same brutish tactics of intolerance and intimidation that have characterized Beijing’s response to the unrest in Hong Kong. Joining their cohorts worldwide, on several occasions Chinese students have threatened (and on at least one occasion assaulted) their Taiwanese and Hong Kong counterparts on university campuses across Taiwan; Chinese nationals (including a family on a tourist visa) have torn down pro-Hong Kong posters on Lennon Walls (most recently at National Sun Yat-Sen University in Kaohsiung); and a CUPP member poured red paint — an unwise choice of color, perhaps, given its association both with violence and “Red China” — on Hong Kong singer/activist Denise Ho while she was giving an interview at the site of the Sept. 29 rally in Taipei. Unhappily for the KMT, a number of Han supporters, who have shown a tendency to threaten whomever disagrees with them, heckled participants at the Hong Kong rally in Kaohsiung  on the night of Sept. 29, which cannot but put the KMT — and the embattled Han — in the difficult position of having to explain why their supporters seem to be siding with Beijing on the Hong Kong issue.

Rather than isolate Taiwan and Hong Kong, Beijing’s unwillingness to accommodate different political systems on its peripheries and its inability to do “soft power” effectively has had the opposite effect: more than ever, Taiwan and Hong Kong are joining hands in their opposition to the CCP. Moreover, due to Hong Kong’s more visible global presence, the disturbances in the former British colony, added to the crass behavior of excitable Communist China supporters around the world, have been a boon for Taiwan, providing it a perhaps unprecedented opportunity to explain to the international community why it continues to resist annexationist China and why the promises and assurances give it by the CCP for “peaceful unification” cannot be trusted.

Michael Cole is a Taipei-based senior fellow with the Global Taiwan Institute in Washington, D.C., the Macdonald-Laurier Institute in Ottawa and the Taiwan Studies Program at the University of Nottingham, UK.