Chrystia Freeland should have remained Minister of Foreign Affairs: Marcus Kolga in Maclean's 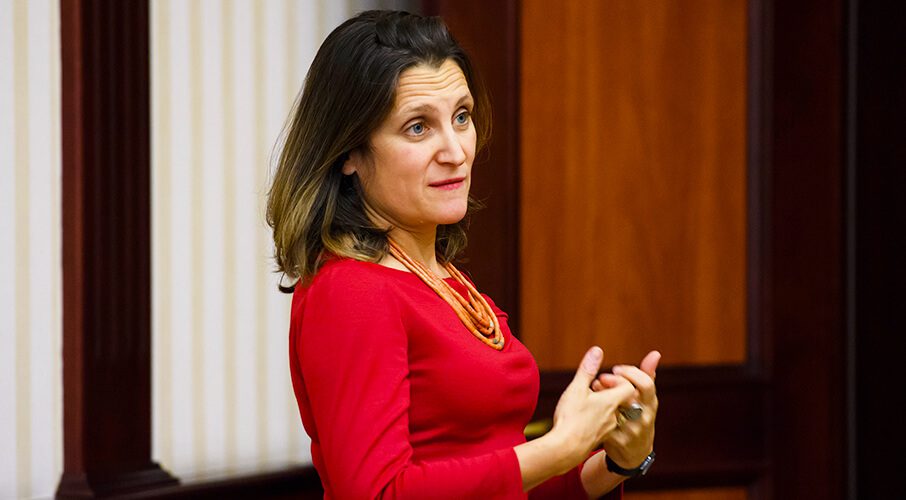 Canada cannot afford to be placing its foreign policy in the hands of anyone other than the very best. With so many complex and demanding challenges, Canada should have stayed the course with Chrystia Freeland on foreign affairs, writes Marcus Kolga.

Thirty years ago, when the Berlin wall fell, the Western world believed it had arrived at what Francis Fukuyama termed the “end of history,” where liberal democracy triumphed over totalitarianism. Yet today, Western democracies have not faced a greater threat to peace, stability and freedom since the end of the Cold War.

As Prime Minister Trudeau has now unveiled the composition of his new cabinet, the shuffles and new appointments reflect subtle changes in Ottawa’s approach to key files. While only time will tell the wisdom of these changes, what’s clear is that moving Minister Chrystia Freeland off foreign affairs is both perplexing and worrying. There are a litany of reasons for keeping her in the role of Minister of Foreign Affairs, and there are no obvious reasons to be removing her.

At a time when Canada and the Western liberal order face significant and growing challenges, few other members of Liberal caucus possess the same level of understanding, experience in foreign policy or the network that Chrystia Freeland has. Over the past years, Minister Freeland has reestablished Canada as a global leader on many important international issues, including human rights, democratic values and the defence our allies.

Rising populist extremism among our allies and around the world requires that Canada maintain a strong and principled foreign policy, which inspires mutual respect and does not bend to intimidation by authoritarian regimes in China, Russia or Iran. The threat is existential. Without experienced leadership, the cohesion of the alliances that we rely upon could succumb to the rot that Moscow and Beijing relentlessly try to inject us with.

Since being asked to help correct Canada’s rudderless and listless foreign policy in 2017, Chrystia Freeland has been lauded by our allies, activists, and Liberals, Conservatives and NDP alike, for her principled and determined foreign policy.

Minister Freeland does have her share of critics. She has faced ongoing online attacks from Russian and Chinese government trolls and propagandists. She has also been criticized by groups with business interests in states like Russia, Iran and China for allowing relations with those states to deteriorate at the cost of standing up for human rights and other core Canadian values. Some have also complained about the government’s tendency for “virtue signalling” and accused them of possible missteps in the application of our foreign policy, whether its vocal criticism of Saudi Arabia that resulted in a Saudi backlash, or being too soft on China, leaving them unprepared against China’s response to Meng Wanzhou’s arrest.

Yet much of these criticisms are overstated. Accusations of virtue signalling overlooks the substance underlying Canadian foreign policy. Complaints about our approach to Saudi Arabia have largely ebbed in the aftermath of Jamal Khashoggi’s murder. While falling short of applying targeted Magnitsky sanctions against Chinese officials who have enabled the repression of over one-million Uyghurs, Chrystia Freeland consistently stood-up to China. She gathered the support of allies in our spat with Beijing and criticized China for its human rights abuses in Xinjiang.

In August, Minister Freeland issued a joint statement with our European allies on the situation in Hong Kong. When some senior Liberals called on the government to acquiesce to Chinese demands to cancel Meng’s extradition, she personally rebuked the suggestion. Ultimately, the chorus of foreign and domestic leaders who have praised her leadership on foreign affairs has overpowered any criticism.

Former Estonian President Toomas Hendrik Ilves, who has known Minister Freeland for 30 years—a testament to her personal global network—“was overjoyed to hear she had become Canada’s foreign minister,” he said. “She has repeatedly demonstrated her superior grasp of the issues and thus is respected and indeed envied by Western leaders, and thus is a huge asset for Canada and the liberal democratic order.” For example, no other member of Parliament has the same depth of understanding of the Putin regime as Freeland, who was Moscow Bureau chief for the Financial Times.

British political activist and financier Bill Browder credits Chrystia Freeland’s “intellect, charm and moral leadership” as the driving force behind the global Magnitsky campaign. When the rumours first arose that Freeland was set to be moved to another portfolio, Browder warned that “it would be a shame for Canada to lose that influence at such a dangerous moment in world history.”

Now that Prime Minister Trudeau’s cards are on the table, it appears that the PMO failed to heed the advice of Browder, along with a chorus of other foreign policy experts.

Chrystia Freeland is likely to import her successes to her new portfolio on intergovernmental relations. This is another hot file that will benefit from her deft management. There is no obvious reason to blindly assert that the new Minister of Foreign Affairs, François-Philippe Champagne, could not build on Freeland’s principled work, so long as the new Minister does not act on advice that promotes appeasement towards Moscow and Beijing.

However, it is both dangerous and unwise to begin experimenting with Canadian foreign policy, with so much uncertainty affecting our allies, and the ongoing threats to our interests from malign regimes in other parts of the world. Canada cannot afford to be placing its foreign policy in the hands of anyone other than the very best.

With so many complex and demanding challenges, Canada should have stayed the course with its leadership on foreign affairs. Prime Minister Trudeau would be wise to seek out his new Deputy PM’s advice on foreign policy, in order to maintain Canada’s leadership position on critical files, among them human rights, and Russia, NATO, China, Venezuela, and U.S. relations.