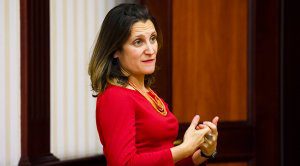 The unrelenting decades-long focus on short-term stimulus for the economy has been at the expense of ignoring the long-term damage stimulus does to potential growth, writes Philip Cross in the Financial Post. Below is an excerpt from the article, which can be read in full here.

Finance Minister Chrystia Freeland’s fall economic statement suffers from cognitive dissonance, or what George Orwell in 1984 called “doublethink”: it requires believing two contradictory ideas at the same time. On the one hand, its projections of government spending and deficits show few long-term effects from the pandemic. On the other, this benign outlook depends on interest rates staying low, which in turn depends on sub-par growth for years to come. So which is it? Things will be OK, though that means interest rates may rise to more normal levels? Or growth is going to be slow, which at least means interest rates will stay low? And, triplethink, if the government responds to slow growth with $70 billion to $100 billion of stimulus, will that not push up interest rates?

Despite the unprecedented economic shock from the pandemic, government finances are forecast to essentially return to where they started. After doubling this year, federal spending falls to 14.5 per cent in 2025, slightly below 2019 despite a near doubling of federal debt. Similarly, government revenues rise only about half a percentage point of GDP from 2019. As a result, the federal deficit as a share of GDP is projected to be only marginally higher in 2025 than it was pre-pandemic.

This forecast of a negligible impact of soaring debt on annual deficits assumes interest rates remain at record lows and higher government spending is temporary. The bond market does seem to believe economic activity will remain subdued for some time. The statement does recognize that the pandemic lowers potential GDP by $50 billion by 2025 — more than $2,000 per working age Canadian. Yet, by some magic, slower potential growth and an aging population do not affect government spending.