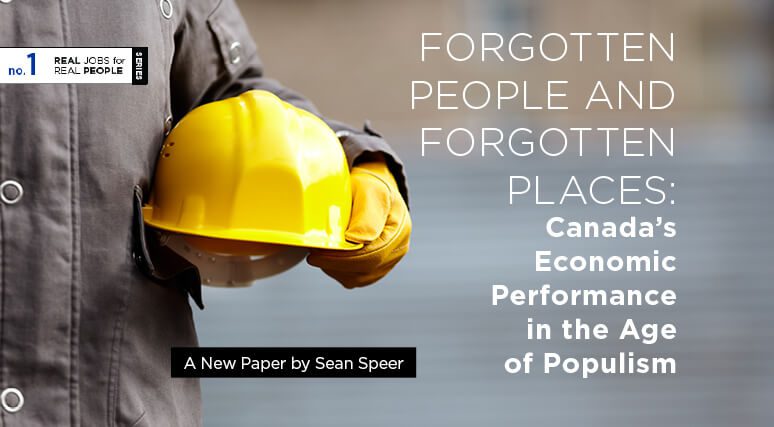 OTTAWA, ON (August 26, 2019): Donald Trump’s surprising election and the rise of populism in various other Western democracies is a salutary warning to Canadian policy-makers. It cannot be assumed that we are immune to these same forces.

What are the causes of rising populism? What can policy-makers do to make our politics more responsive to working-class interests? Canadian politics must be more oriented to answer these questions if we are to avoid the populist disruption and polarization observed elsewhere.

The paper delves into the headline data on employment, labour force participation, income, and other key economic indicators to better understand where there may be economic challenges and who is most at risk of falling behind in the modern economy. As Speer explains, drilling down into the data can better inform the political debate and target policies for vulnerable populations and communities.

“One of the lessons from elsewhere is that we cannot judge the health of our labour markets simply by examining the headline data,” argues Speer. “We need to drill down to discern ‘who’ and ‘where’ are at risk of falling behind.”

What does the paper find?

Disaggregating the economic data finds that while the overall economic picture is positive, certain cohorts and communities are struggling. In particular, the paper shows that most of Canada’s positive performance on jobs and wages in the past two decades or so has been driven by women with post-secondary qualifications. The relative performance of educated women has driven most of the overall labour market gains that Canada has made. This is great news, but it has obscured some troubling trends – particularly among men and women without post-secondary qualifications.

The truth is that men and women without post-secondary qualifications have struggled across a wide range of economic indicators. One example: Canadians without post-secondary qualifications now earn, on average, one-third less than their educated peers. The rise of the knowledge-based economy is only exacerbating this divide. The result is stagnant wages, declining opportunity, and a growing dependence on government transfers.

“The challenges are most acute for working-age men without post-secondary qualifications, whose labour market outcomes outside of the oil-producing provinces have for some time resembled some of the poor outcomes observed in parts of the United States,” writes Speer.

“This cohort seems to be facing a series of secular headwinds that threaten their inclusion in broader labour market gains.”

These trends are hitting Canada’s rural areas the hardest; where you live is increasingly a major determinant of one’s economic outcomes. One example: rural employment levels are still down since the 2008/09 recession whereas employment in other parts of the country is up by 13 percent.

But the biggest source of divergent outcomes may be educational attainment. While Canada performs well overall in this regard, it is easy to forget that approximately 36 percent of working-age Canadians – or 6.7 million Canadians aged 25 to 64 – do not have post-secondary qualifications. This population is roughly equivalent in size to the populations of Manitoba, Saskatchewan, and Alberta combined, or more than the population of the entire Greater Toronto Area.

As has been observed in the United States and Europe, it is this cohort that is the most vulnerable to precarious employment and in turn the principal political supporters of populist politicians. Failing to address adequately the problems that face this cohort of Canadians could come with significant negative economic, political, and social consequences.

“The lesson from elsewhere is that we cannot afford to take these people for granted,” argues Speer. “And it is the animating premise of the Real Jobs for Real People project that we should not.”

To learn more about Canada’s economic performance in the age of populism, check out the full paper here.