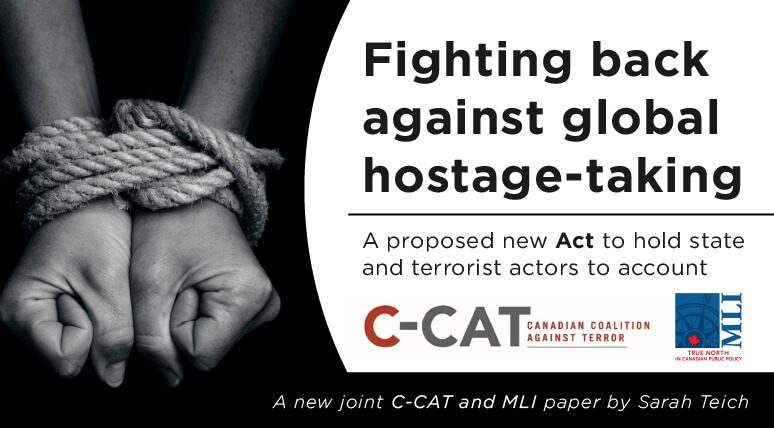 OTTAWA, ON (January 21, 2021): Canadians Michael Kovrig and Michael Spavor have languished as hostages in China’s brutal prisons for over two years. And this is just the most high profile recent case of innocent Canadians abroad being held against their will. Yet Canada still lacks any meaningful method to hold China, as well as non-state actors like terrorist organizations, legally accountable for hostage-taking, and to support the families of victims.

In a new joint publication between MLI and the Canadian Coalition Against Terror (C-CAT), titled “Fighting back against global hostage-taking: A proposed new Act to hold state and terrorist actors to account,” MLI senior fellow Sarah Teich proposes legislation to counter the challenges of hostage-taking and hostage diplomacy from state and non-state actors

“[T]he Canadi­an government has taken only limited action to combat hostage-taking,” argues Teich. That has in part facilitated a persistence of hostage-taking from foreign regimes and terrorist groups. Currently, the only legal remedy on Canada’s books is a decades-old amendment to the Criminal Code that criminalizes the behaviour at home and abroad.

“Hostage taking is a key tool in the terrorist arsenal. But in recent times this practice has become almost normalized as a form of ‘diplomacy’ employed by authoritarian regimes like Iran and China,” explains Danny Eisen, the co-founder of C-CAT. “The newly minted Hostage Accountability Act proposed by Ms. Teich in her paper co-published by C-CAT and MLI is the first Canadian initiative to recalibrate our laws in this regard and it deserves the careful consideration of Canadian lawmakers.”

By introducing a dedicated sanctions mechanism to respond to hostage-taking of Canadians abroad, Teich argues that consequences may finally be introduced to hold bad actors to account. Under the proposed legislation, these sanctions could apply to states and individuals alike who are responsible for engaging in hostage-taking and hostage diplomacy.

Supporting families would serve a valuable humanitarian function, ensuring that the families of Canadian hostages receive consistent and reliable support from government. This ensures that Ottawa provides information to families, guidance, mental health support and more. In this way, victims and their families would be placed at the centre of the government’s efforts to address hostage-taking.

Lastly, the proposed legislation provides a framework for how Canada could work with international partners, allies and foreign nationals to jointly coordinate a response. This would provide the government of Canada with more tools to help secure the release of hostages while recognizing the importance of having local partners in any hostage situation.

“Canadians continue to be seized as hostages without justification or due process. They continue to be abused, tortured, and murdered by their captors. This persistence of hostage-taking and hos­tage diplomacy, combined with the limited domestic action taken by the Ca­nadian government so far, demonstrates that Canada must take further action, and specifically legislative action, to prevent and combat acts of hostage-tak­ing by foreign state and non-state actors,” explains Teich.

This publication provides a legislative toolkit for policy-makers to address hostage-taking and coercive diplomacy. If implemented, this novel legislation would help to improve the safety of Canadians abroad by giving greater teeth to the government’s efforts to combat hostage-takers and ultimately, deter the behaviour in the first place.

“We cannot continue to sit idle while both state and non-state actors threaten the safety of Canadians,” says Teich. “This legislation is a workable, significant, and long-needed first step toward protecting Canadians.”