The Coming Crisis in the US (and what Canada should do about it): Balkan Devlen for Inside Policy 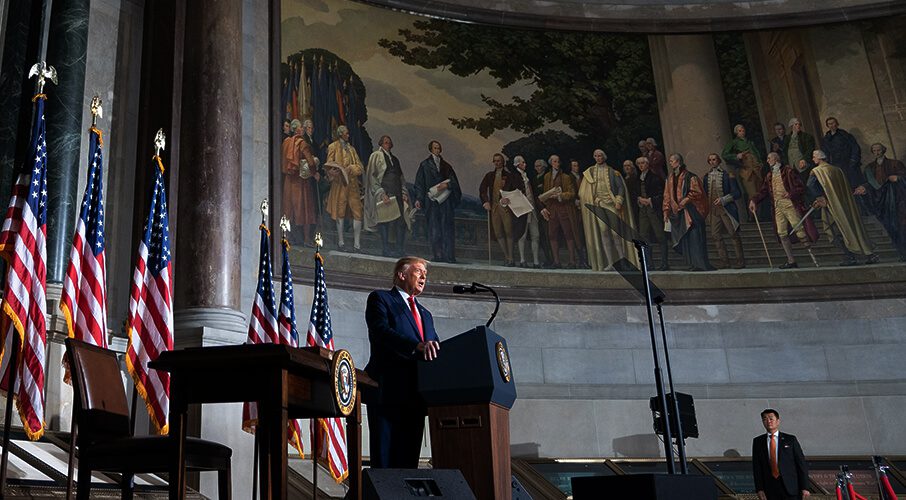 Canada should start thinking about contingency plans for all eventualities following the US November elections, writes Balkan Devlen.

In the midst of a pandemic, faced with record high budget deficit and government debt, unsure about the prospects of a quick economic recovery, beleaguered by an ongoing ethics scandal that led to the resignation of a senior minister, and potentially facing a vote of no-confidence when the Parliament returns in late September, American politics is perhaps the last thing in the mind of Prime Minister Justin Trudeau.

Maybe you are not interested in American politics but American politics is interested in you, to paraphrase Trotsky, and this is particularly the case for any Canadian leader. Our deeply integrated economy and close defence and security cooperation, not to mention the fact that Canada shares the world’s longest undefended border with the United States, mean a Canadian PM would need to keep an eye out for any potential trouble brewing south of the border.

Unfortunately I have bad news. The US is heading into a once-in-a-generation political crisis; Canada should be prepared for such a scenario and our government should start thinking about contingency plans for all eventualities. Let me explain. There are at least three ways in which such a crisis could come about.

Although this is generally discussed in the media as Trump not accepting defeat, it is also easy to imagine a scenario where Biden wins the popular vote but narrowly loses the Electoral College. A recent wargame exercise by Transition Integrity Project that included several former senior politicians and policy-makers gamed such a scenario, along with more popular scenarios where Donald Trump refuses to accept the results, contests them in key battle states, Republican and Democratic state legislatures side with one candidate over the other, and court challenges all the way up to the Supreme Court.

A contestation can and probably will go on for weeks if not months... Low-level political violence is very likely.

The bottom line is that such a contestation can and probably will go on for weeks if not months, creating deadlock and paralysis in the machinery and institutions of government while a pandemic rages on, polarizing the society further and putting additional strain on America’s democratic traditions and institutions. Low-level political violence is very likely (e.g., rival protesters clashing in the streets) and there is a very small but greater than zero chance that different law enforcement agencies will take different sides.

Even if there is a clear victory for Biden and Trump’s attempts to contest the election do not bear fruit, Trump will use the transition period to do as much damage as possible before leaving office on January 20, 2021. This can include military action abroad, hollowing out federal institutions, ramming through controversial executive orders, issuing blanket pardons to the members of his administration, trying to negotiate immunity from criminal charges for himself and his family, stonewalling Biden’s transition team and withholding information from them, etc.

Why do I think that will be the case? My expectation is based on what we know about Trump’s personality (e.g., he hates being humiliated, is very quick to take offence, and never accepts responsibility for failure) and the political incentives to do so (e.g., bogging down the new administration with so many problems and fires to put out that it will have less bandwidth to go after Trump and Co. after the election). Also having studied authoritarian leaders over the years, I believe – mixing lyrics/metaphors a bit here – they rarely go gently into the night but rage, rage against the machine (that put them out of power). I am fairly confident that if Trump is forced to concede, this will be the path he will choose. How much damage he can do requires a different analysis if things move in that direction.

A surprise Trump victory and a reluctant Biden concession will not mean that the Democratic base (particularly its more far-left wing) will accept the results. Remember those “Not my President” placards and marches after Trump was elected? Think about them but much bigger this time around, coming at the heels of Black Lives Matter protests and the ensuing riots in some cities. Mass demonstrations challenging the legitimacy of Trump’s presidency, claims of voter suppression, and demands for Trump’s resignation would be the result. Trump will react very harshly by sending in the federal law enforcement or perhaps even the US military, arguing that this is an insurrection.

Even if Canada cannot do much to alter the trajectory the US is on, bracing for impact – that is trying to minimize exposure and reduce vulnerabilities as much as possible – will still be much better than doing nothing and having to face the full force of the crisis.

All of this is bad news for Canada. Political instability in the US and the economic uncertainty it engenders will further tank Canada’s largest export market just when we are facing unprecedented economic difficulties. Paralysis or chaos in the US federal government will exacerbate the existing tensions about border reopening and trade disputes or trigger new ones. An increase in political violence in the US could lead to a surge in irregular border crossings, forcing Canada to make difficult choices about border security.  A dragged out dispute over the election results could lead to the emergence of rival centres of power with competing claims of legitimacy and even a military intervention – an event with an exceedingly low probability but not unthinkable, putting Canada in an impossible position. Who do we recognize as the legitimate authority if there are competing claims? What about NORAD?

What can we do? To be frank, not much except bracing for impact. However even if Canada cannot do much to alter the trajectory the US is on, bracing for impact – that is trying to minimize exposure and reduce vulnerabilities as much as possible – will still be much better than doing nothing and having to face the full force of the crisis.

How can we brace for impact?

First, the Canadian government should wargame the hell out of this crisis and its multitude of variants if they are not already doing so. Wargames, also known as serious games, such as the matrix games used in the Transition Integrity Project mentioned above, were always popular with the military but now are having a renaissance in policy, academic, and business communities. They are low-cost, can be put together relatively quickly, and when done right could provide valuable insights about the dynamics of decision-making under uncertainty. They are good at highlighting vulnerabilities, testing robustness of different policy responses, and finding blindspots.

The Department of National Defence naturally has experience with a variety of wargames but there are existing wargaming capabilities within other government agencies from Global Affairs Canada to Public Safety Canada, from various intelligence agencies to the federal government’s own foresight shop, Policy Horizons. Analytical games work best when they are done with a diverse set of stakeholders and repeated under different scenarios. Federal and provincial governments should start to organize them and run various scenarios from local/provincial concerns about disruption of trade and border issues to strategic level concerns about NORAD and national security.

Second, the government should discreetly reach out to other like-minded states and allies, who would be sharing similar concerns about a prolonged political-legal crisis in the United States. Being able to share information, coordinate policy, and if needed develop a concerted action with other allies would provide a buffer and some degree of protection for Canada. It is also a good long-term hedging strategy. Whatever the outcome of this crisis, existing fissures and cleavages within American body politic are not going to disappear anytime soon and those would continue to have repercussions for America’s international behavior. Those who are thinking that if Biden wins everything will be “back to normal” are just deluding themselves. Canada should start looking for ways to reduce its exposure to the tumultuous currents of American politics and build strategic, diplomatic, and economic buffers and redundancies.

Lastly, the government should resist the temptation to pontificate and choose sides in the run up and the immediate aftermath of the US elections. Moral grandstanding is Trudeau’s siren song but it would be disastrous in this case. The US is not some far away state that the PM could chastize for failing to live up to some lofty ethical criteria. It is the behemoth next door that Canada cannot afford to alienate. We do not have meaningful leverage to affect the outcome of such a political-legal crisis in American politics. We would have to live with whoever comes out victorious in this contest regardless of how we feel about him. So a prudent, cautious policy should be the order of the day. Simply put, Canada cannot be the cheerleader for Biden in the aftermath of a contested election lest we are forced to live with Trump for four more years. The PM’s first and foremost job is to protect the Canadian national interest, whatever one’s personal preferences and wishes are.

In short, a crisis after the November elections is overdetermined. There are multiple routes to get there and a lot of stars need to align just right for it not to happen. Furthermore, such a crisis – whatever shape it takes – will continue until at least early to mid-2021. Canada should be prepared for such a scenario and our government should start thinking about contingency plans for all eventualities. This is one foreign crisis we cannot afford to ignore.

Balkan Devlen is a senior fellow at MLI and a “Superforecaster” for Good Judgment, Inc., a geopolitical forecasting consultancy based in New York. Part of this article first appeared in Hindsight 20/20 (https://h2020.substack.com).