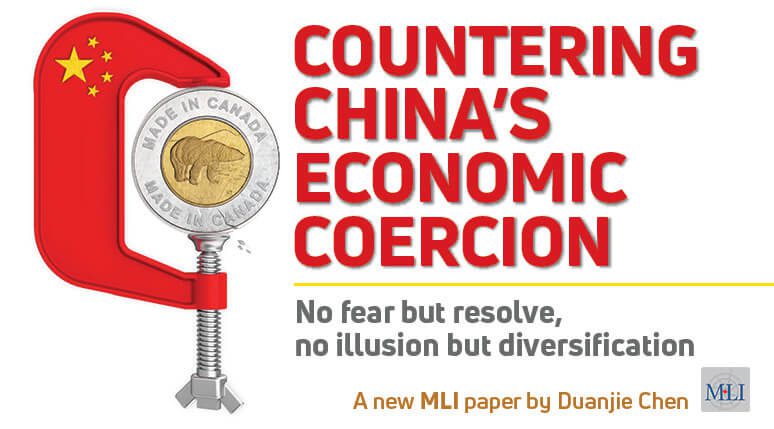 OTTAWA, ON (September 5, 2019): China recently moved to ban Canadian canola, soybeans, and other agriproducts. These efforts at economic coercion are closely tied to the ongoing tensions between the two countries, which began when Canadian authorities arrested Huawei CFO Meng Wanzhou in December 2018, following a US extradition request. Simply put, China is attempting to pressure Canada economically into releasing Meng Wanzhou.

The disparity in power between Canada and China has led some observers to comment that “we need China – and China doesn’t need us” or that we were only “a flea sitting on China’s shoulder.” The suggestion is that there’s little the Canadian government can or should do in response to Chinese economic coercion.

Yet, as a new MLI report by Munk Senior Fellow Duanjie Chen makes clear, Canadians must reject the view that China has all the economic power and Canada has none. Titled Countering China’s Economic Coercion: No fear but resolve, no illusion but diversification, this paper demonstrates that Canada has some significant advantages and China is taking some serious risks.

“The majority of our exports to China are commodities for which the supply is constrained by natural resources that are either scarce or rapidly depleting in China,” writes Chen.

“Meanwhile, all our imports from China are manufactured goods that are easily replaceable from suppliers in other markets, despite possibly higher prices. Indeed, cultivating more reliable suppliers for such goods will benefit Canada economically in the long run.”

In its dealings with China, the Canadian government has much to learn from other governments. The paper explores the experiences of the Philippines, Mongolia, France, Norway, South Korea, Japan and Taiwan, which have all suffered from Chinese economic coercion.

The Philippines and Mongolia have capitulated while France and Norway have modified their behaviour to appease China. South Korea largely refused to appease China, and at least one of its large investors is seeking to leave China entirely. Japan also took the important step of diversifying its rare earth supplies following a Chinese ban in 2010. Taiwan has shown remarkable resilience and made conscious efforts to boost trade and investment with other countries to reduce its economic dependence on the mainland.

Chen also points out that the long-term prospects for our farmers facing China’s ban on our agriproducts do not seem as dire. For example, even with the ban on canola, Canadian canola by total planted area is expected to climb, total canola seed exports will be still higher than in the past, and canola oil production will increase over the longer term. Still, as detailed in the report’s conclusion, they deserve support from the government in the near term due to political disruptions beyond their control.

“The canola story reflects general global trends for other commodities dependent upon natural resources, particularly edible ones – specifically, that global markets for our agriproducts and other natural resources have been generally stable,” notes Chen. “China’s disruptive play will only cause growing distrust among its trading partners, which in turn will adversely affect China’s long-term security in food supply.”

According to the report, a Chinese ban on all our agriproducts would total about $10 billion for the coming year – and that potential loss would increase to $16.4 billion if China ever decides to bar its tourists from Canada and recall its students studying in Canada. That is not a likely outcome, but it does show the limits of China’s ability to apply economic coercion against Canada.

Finally, China’s economy is also showing signs of wear; it is suffering from severe shortages of arable land, persistent income disparity, an aging population and a growing popular desire for the benefits of foreign competition. Importantly for Canada, China’s need for agriproducts imports will only continue to grow.

Canada is not in such a weak position as we had believed. We have immediate options in countering China’s economic coercion. For instance, Canada can:

In the long-term, Canada should be taking every measure available to diversify our trade beyond China. Taiwan has been vigilantly doing so for years, and Canadians should take note of its efforts to achieve greater resilience against China’s economic coercion. Such trade diversification should be part of Canada’s long-term strategy in the Indo-Pacific region.

With its growing economic size, China believes it can act at will against any country. Yielding to China’s coercion, economic or otherwise, will only embolden it. Chen’s paper argues that it is therefore time for Canada to learn from the like-minded jurisdictions that have been standing up to China’s economic coercion.

“This is not to suggest that Canada take a blindly confrontational approach towards China, but rather, to act upon our conviction that we do not want any country to behave the way China currently does towards Canada. What we want from China is for it to behave like an equal member of the international community,” concludes Chen.

To learn about China’s economic coercion and how Canada can respond, check out MLI’s latest report here.