Fighting COVID-19 is Not Like Fighting a War: Quarterly Economic Report by Philip Cross 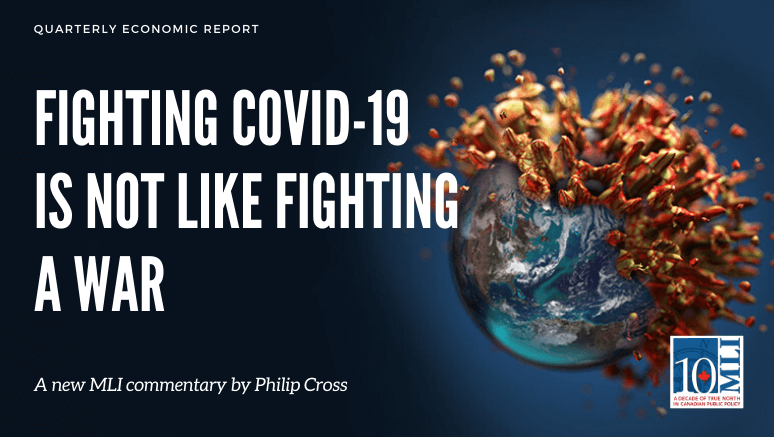 OTTAWA, ON (June 29, 2020): Government deficits are on track to reach $400 billion just as the Canadian economy has been brought to a halt.  In conjunction with the unparalleled level of spending, it may be tempting to describe our society as moving toward a ‘war footing’ to fight COVID-19.

However, our COVID-19 response has little in common with wartime mobilization. In a new MLI quarterly economic report, titled “Fighting COVID-19 is not like fighting a war,” MLI Munk Senior Fellow Philip Cross explains the differences between our current economic situation and that of previous fiscal responses to crises.

“In a just mere two months, Canada has experienced a larger drop in GDP than all other post-war recessions combined,” Cross writes.

Unlike with World War 2, Cross argues that during this peacetime pandemic, Canadians have shown no willingness to tolerate the restrictions and hardships that were necessary to finance the war. As well, he highlights the unexpected nature of the rapid post-war economic growth.

“Many economists expected unemployment would soar when millions returned from military service overseas,” Cross observes. “Certainly, the surge in growth was not the result of government planning; at the time, the government did not even have basic data on GDP or productivity.”

The misleading comparisons between our current economic crisis and the post-war period tends to invoke some popular economic myths. For instance, this comparison gives rise to the idea of using a crisis to restructure the economy. Cross explains that some might find it tempting to ask, “if we can command the huge resources needed to contain the pandemic, why not use the occasion to make fundamental changes to our society?” Cross suggests that such restructuring is unnecessary and undemocratic with little evidence that it would be beneficial.

“Unless Canadians choose to lower their consumption for more government spending, plans to impose a restructuring look like another elitist attempt to tell ordinary people how to live,” warns Cross.

Canada’s economic recovery will look less like the post-war boom, and more like the recovery from the 1994 debt crisis or the 2007-2008 recession. The template for austerity introduced during these periods relied on spending cuts, not tax hikes. Cross argues that today’s policy-makers would do well to remember that spending reductions are less harmful to growth and long-term productivity than higher taxes

Regardless of the policies pursued, Cross warns that Canada cannot “simultaneously resume normal economic activities and fundamentally restructure the economy, nor would we want to.”

Philip Cross is a Munk Senior Fellow with the Macdonald-Laurier Institute. Prior to joining MLI, Cross spent 36 years at Statistics Canada specializing in macroeconomics.