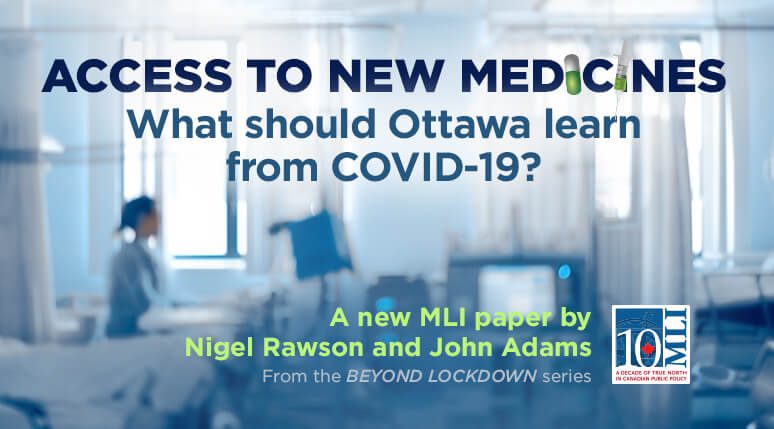 OTTAWA, ON (June 18, 2020): The COVID-19 pandemic has revealed numerous weaknesses in Canadian health care, and as the world races for new treatments and vaccines, it shows Canada’s system for accessing new drugs in a particularly harsh light. A new MLI report by authors Nigel Rawson and John Adams calls on the federal government to reverse new schemes for drug pricing and coverage and allow Canada to become a leader in the development of new medicines, treatments and vaccines.

The paper, titled Access to New Medicines: What Should Ottawa Learn from COVID-19, is particularly timely since this week the federal government will move forward with a new scheme for fixing drug prices that will likely severely reduce Canadians’ access to life-saving medicines. Rawson and Adams stress that Canada must build a more resilient health system that can provide access to not only a COVID-19 vaccine, but other new innovative medicines as well.

“For a new drug to get past the regulatory review, health technology assessment, and two-tiered pricing negotiations, it is a long road that can take at least two years,” Rawson and Adams observe. “Patients, families, and clinicians have a right to be impatient about this process.” Given that drug developers usually apply in Canada after they have applied in the United States and Europe, Canadian patients frequently don’t get access to a new drug until three years or more after American and European patients.

The government’s planned changes to the Patented Medicine Prices Review Board (PMPRB) could make things significantly worse. While the take-effect date for the changes and new guidelines has been delayed to January 1, 2021, the changes will apply retroactively to medicines introduced on August 1, 2019.

And this week, the PMPRB is expected to release revised guidelines for public comment. According to Rawson and Adams, more Canadians should be concerned, as the damage from Canada’s convoluted drug approval and pricing process is already being felt.

For instance, clinical trials for drugs in Canada have fallen by 52 percent between November 2019 and March 2020. Moreover, the percentage of new drugs approved in Canada before or within a year of approval in the US has sharply declined from 55 percent to just under 16 percent. These worrying trends are perhaps best encapsulated by the fact that, of 25 novel therapeutic medicines authorized for marketing in the US between October 2019 and February 2020, none has been submitted to Health Canada.

In terms of our present crisis, “any new COVID-19 vaccine will need to comply with the new PMPRB regulations and guidelines in place at the time of their launch in Canada,” Rawson and Adams note. This could slow Canadians’ access to this vital vaccine or other treatments.

Rawson and Adams explain that the changes to the PMPRB are intended as a step towards a national pharmacare program, which will be costly and again pose major challenges to access to medicines. The federal government’s Advisory Council on the Implementation of National Pharmacare forecasts a cost of $40 billion. However, even with this hefty price tag the federal government plans to cover only medicines commonly used in primary care, at least initially.

“Will Canadians find it fair if federal politicians and officials, who have high-quality private health insurance that covers more than 10,000 medicines for themselves and their dependants, provide them with a national pharmacare program that covers a few hundred or even a couple of thousand drugs?” Rawson and Adams ask.

As the authors put it, “Miracle drugs are of benefit only if patients and their doctors can access them.”

To learn more about the problems facing Canada’s healthcare system generally and its approach to new medicines specifically, read the full paper here.

John Adams is cofounder and CEO of Canadian PKU and Allied Disorders Inc. and volunteer board chair of Best Medicines Coalition.