If the Czech Republic Can Do It, So Can We: J. Michael Cole for Inside Policy 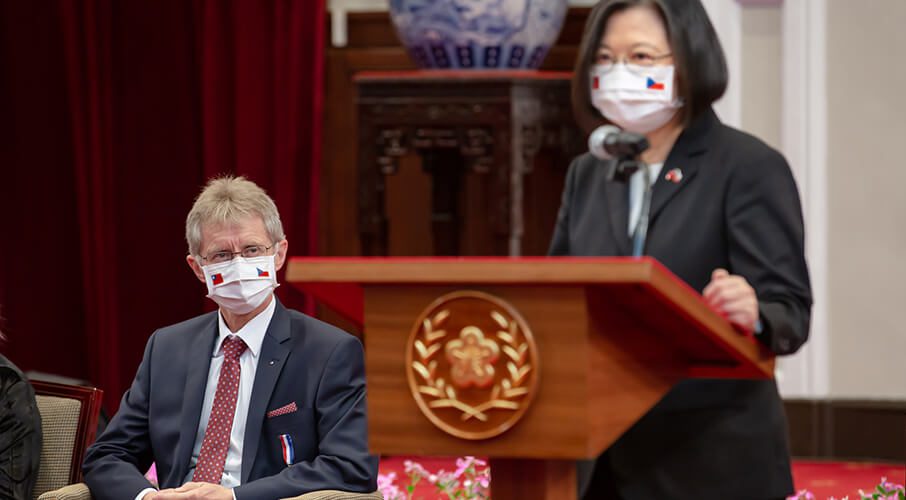 Photo by Wang Yu Ching / Office of the President, ROC

Among small and medium powers, the Czech Republic is bravely leading the way and showing the rest of the world that it is possible to stand up to China. It is in stark contrast with the moral cowardice that many more powerful countries have displayed in their interactions with China, writes J. Michael Cole.

“Vicious in nature.” “Twisted.” “A rule-breaker who is trampling on diplomatic civilization.” “Evil deeds.” “Political hooligan.” One could be forgiven for thinking the target of such opprobrium was some tyrant who had violated the very tenets of international law. Who was this miscreant? Had he threatened neighbors with military invasion? Was he the architect of a network of concentration camps? A mastermind of ethnic cleansing? A despot who has cracked down on his own people?

Meet Miloš Vystrčil, president of the Senate of the Czech Republic. Vystrčil, the second-highest politician in the Central European country, landed in Taiwan on Sunday as head of a high-level delegation.

This visit is all the more poignant because Vystrčil’s predecessor, Jaroslav Kubera, was originally meant to lead the delegation before dying suddenly of a heart attack in January. Soon after his passing, Kubera’s family revealed that the Chinese embassy in Prague had sent him a threatening letter over the visit. (Kubera also reportedly told his wife not to eat anything at any function organized by the Chinese embassy, which suggests that he feared poisoning.)

So, what has Vystrčil done that had led Chinese Communist Party mouthpieces to describe it with such over-the-top criticisms. What was his “despicable act,” according to Chinese Foreign Ministry Spokesperson Zhao Lijian?

Vystrčil is from a democratic country in Europe with a  long, proud history of standing up to foreign invaders – Nazi Germany and the Soviet Union – and authoritarianism. This week, he visits another vibrant democracy in East Asia, which has a similar history of subjugation, authoritarianism, and threats from an annexationist regime next door. Those shared experiences have created a special bond between the peoples from both countries, one that has also been accompanied by vibrant trade, investment, and tourism.

What irks the CCP is the fact that years of attempts to buy, penetrate, co-opt, and influence the Czech Republic had failed to prevent flourishing ties between the two democracies and the visit by Vystrčil. Similar threats have also failed to deter Zdeněk Hřib, the Prague mayor who has also defied China on Taiwan. The CCP cannot countenance that “a small, remote Central European country” would not abdicate. It fumes and threatens, and when all this fails, Beijing consoles itself by pointing out that the transgressor is small and insignificant. (Why all the noise, then?)

Indignant, the Chinese regime simply cannot accept that the visit to Taiwan is the Czech Republic’s sovereign decision, and not, as it claims, part of US-led machinations to “engage in a new cold war against China.”

Misleadingly, Beijing also contends that the visit by a sitting official violates the so-called “one China” principle – a principle that only exists in Beijing’s Orwellian view of the world and which should not be confused with a country’s “one China” policy. As the world slowly awakens to the risks and costs of embracing authoritarian China, more countries will be willing to engage Taiwan, an economic powerhouse and frontline state in the brewing battle of ideologies that pits the CCP and other despotic regimes against a fledging alliance of democracies.

Among small and medium powers, the Czech Republic is bravely leading the way and showing the rest of the world that it is possible to stand up to China. It is in stark contrast with the moral cowardice that many more powerful countries, like Germany (or indeed Canada), have displayed in their interactions with China. None of this is because doing so is in any way illegal, but simply because we allow Beijing to dictate our foreign policy and to threaten us whenever we indicate that we may want to explore our sovereign right to act otherwise.

As Vystrčil’s delegation interacts with the miracle that is Taiwan this week, we should collectively ask ourselves, If small Czech Republic can do it, why not us? Undoubtedly China will threaten, and my even retaliate against certain individuals and companies. But its game is up. Its ability to hit back is far more limited than it lets on. Meanwhile, the Czech Republic will survive. In fact, it will continue to prosper. And so can the rest of us.