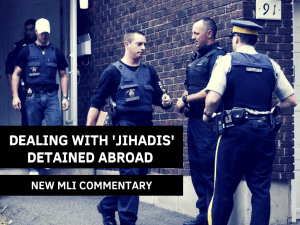 OTTAWA, ON (November 16, 2018): The Islamic State is crumbling, and in its wake, Canadian policy makers are now faced with a new challenge: what should be done with Canadian jihadis returning home or being detained abroad?

To address this problem, MLI has released a new commentary by Scott Newark, titled It’s Time for an Effective Strategy to Deal with Canadian ‘Jihadis’ Detained Abroad. In it, Newark argues in favour of a proactive, case-specific approach to managing jihadist fighters as they return to Canada or become detained abroad.

“As the Islamist control over Syria and Iraq has dissolved, there have been an increasing number of cases where foreign fighters and their families have been captured,” writes Newark. Recent high-profile cases indicate the “difficulty law enforcement faces with regards to pursuing prosecutions for these kinds of offences committed abroad.”

But what should be done? After all, the crimes allegedly committed were far outside Canada, and there is little direct capacity for Canada to intervene. However, if Canadians are detained abroad and are mistreated, the Canadian government is left open to lawsuits on the grounds of Charter rights, as we have infamously seen in the cases of Maher Arar, Abdullah Almalki, Ahmad El-Maati and Muayyed Nureddin, and Omar Khadr.

Newark makes the case that reforms are needed both in terms of how the government manages the return of jihadis and Islamic State supporters and in terms of working with foreign governments that have detained these individuals.

Rather than simply allowing individuals to return to Canada or sit in foreign detention and claim that their Charter rights are being violated, Newark suggests that there are steps Canada can take to bring these individuals to justice. Some of his recommendations include:

Ultimately, these reforms are based on the goal of defending the Canadian public. “It is essential to recognize and accept that the best way to prevent future harmful conduct by these people is to take appropriate action once they have been detected and apprehended,” writes Newark.

“Global circumstances also make clear that this must be a priority for Government because the problems are not going away… What’s required now is real leadership.”

To learn more about the actions that the government should take when it comes to Canadian jihadis abroad, read the full commentary here.