Defence policy should be an amalgamation of perspectives: Richard Shimooka in The Hill Times 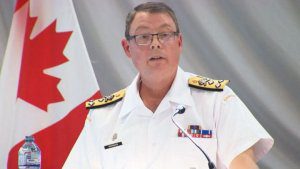 While the DND leadership put forward what it believed to be the best approach, Mark Norman’s advice itself changed what government policy was, writes Richard Shimooka.

Over the past several months, the trial and eventual stay of charges on Vice Admiral Mark Norman has been a spectacle for Canadians. Behind the immediate headlines, however, is a broader and much more consequential debate on the organization and responsibilities within the Department of National Defence (DND) and the Canadian Armed Forces (CAF).

This is not a new debate by any means; the modern iteration has been ongoing for the past sixty years. It revolves around the proper role of the Chief of the Defence Staff (CDS), Deputy Minister (DM) and their respective subordinates. It is a fundamental tension between the rank and file military and its unique culture and ethos, and that of the public service, both within DND and the government at large.

In the 1960s, the civilian side of DND was viewed to have disproportionate influence over the command and control functions of the CAF. In 1971, the Pierre Trudeau government attempted to resolve this problem by commissioning the Management Review Group, which released its report a year later. While initially not well-received, the government did end up implementing many of its recommendations – including the reorganization of the CAF and DND into a National Defence Headquarters.

The Management Review Group, however, viewed the operation of DND largely as a management problem rather than a command one. Following its recommendations, a collaborative structure, later referred to as a “defence team,” was established that expanded the DM’s capability and power in order to provide better administrative functions to the department and accountability to government as a whole. Its areas of responsibility were on defence procurement, policy and financial areas. The CDS would be firmly entrenched in the command and control aspects of the military to preserve its operational effectiveness. The collaborative arrangement would work between the functional areas in order to provide effective control and accountability.

Unsurprisingly, Management Review Group’s the neat division of labour never really worked out as intended. Issues such as the military’s ability to set requirements for procurement presented perennial challenges, and eventually, claims resurfaced that civilians had an inordinate say in military decision-making. This was the case during the 1992 Somalia mission, and again during the Afghan operation. It led to one of CDS General Rick Hillier’s more memorable statements: “Civilian control of the armed forces is not civil service control of the armed forces.”

Over the past decade, a greater harmony at between the CDS and DM has prevailed compared to previous turbulent relationships. Furthermore it seems the CDS’s primacy on matters relating to military command and control has been unquestioned. However many of the underlying issues that Management Review Group attempted to correct remain. There are fundamental differences in culture, knowledge, skills and objectives that are not easily papered over.

Military staff frequently possess unique technical knowledge that is non-existent elsewhere within government, which creates an information asymmetry between them and policy-making bodies within the DM organization. This can cause a clash when overarching government objectives do not conform to these fundamental realities. While the ideal is that this would lead to changes in policy, the opposite usually occurs: the realities are ignored in order to meet government objectives.

Military requirements have been watered down within the DM’s office and minimized in order to meet other objectives, such as obtaining superior industrial benefits, despite clear evidence that these policies may lead to negative consequences for the military. This is evident with the Fixed Wing Search and Rescue program, where a significantly inferior option seems to have won largely based on industrial benefits considerations. The selection of the C-295, with inferior range and speed to the C-27J, will result slower response times to incidents in remote locations. That is cold comfort to individuals in distress.

Certainly military members are aware and willing to accept non-military policy considerations; that is without question and a nature of the defence team. DND should not simply advocate the military’s position in all cases, either; this would lead to questions over its role in service to the government. However the balance seems to have shifted beyond what was envisioned before. It breeds distrust and less than optimal outcomes for the military, the department and the country as a whole.

Yet, as the framers of the Management Review Group study believed, defence policy and advice from the department should be an amalgamation of perspectives. It may provide better outcomes than what we are witnessing today.