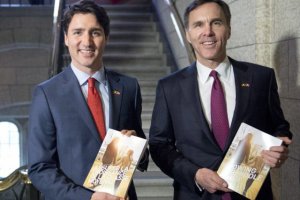 The Trudeau government cannot blame its budgetary deficit on its predecessor, external shocks or other factors, writes Sean Speer.

Late last week the federal government released its Annual Financial Report for 2017/18. The AFR, as it is frequently referred to, provides the final fiscal outcomes for the previous year. It is therefore an opportunity to assess the government’s fiscal performance relative to its projections.

The 2017/18’s outcomes are slightly complicated due to an accounting change related to the government’s pension liabilities. Others such as UBC’s Kevin Milligan have done a good job explaining the changes, their rationale, and what they mean for understanding the revised fiscal data.

I won’t address them here. I’m principally interested in the nagging idea that the government’s deficit is somehow the result of a one-time drop in revenue in 2016/17. This is a subject that I’ve written about before.

It’s indeed the case that the current government experienced a sharp, one-time revenue decline in its first full-year in office. Federal revenues fell by $9 billion relative to the Harper government’s projections mere months earlier. Had Mr. Harper been re-elected, his government would have faced the same fiscal squeeze. It’s quite possible – in fact, likely – that his government would have also recorded a budgetary deficit in 2016/17 as a result. I don’t disagree or challenge this point.

But the idea that this one-time drop in revenue in 2016/17 somehow grants the Trudeau government dispensation from its own fiscal choices in subsequent years is incorrect. The recent AFR further confirms my point.

Comparing the Budget 2015’s projections for 2017/18 and the AFR’s actual outcomes enables us to see what budget inputs – including revenues, program spending, and public debt charges – have changed. Basically it helps us to isolate the extent to which these different factors are driving changes in Ottawa’s fiscal outcomes. The table below highlights the differences between the Annual Financial Report and Budget 2015 for 2017/18.

DIFFERENCES BETWEEN THE ANNUAL FINANCIAL REPORT’S OUTCOME AND 2015 BUDGET PROJECTIONS, 2017/18

This year’s situation is different than in 2016/17. The government cannot blame its budgetary deficit on Mr. Harper or external shocks or some other factors. It’s driven principally by its own discretionary spending choices.

Remember the Trudeau government came to office with commitments of incremental spending increases within a budgetary framework capped at $10 billion annual deficits. Higher-than-projected revenues and lower public debt charges could have enabled it to live within this campaign promise if the government wanted to. Yet the 2017/18 deficit is still about $8.5 billion higher than Mr. Trudeau’s campaign promises. Nearly $30 billion in new, incremental government spending is the main culprit. And, as we’ve written elsewhere, the notion that this is mostly infrastructure spending is also false.

The Trudeau government has made its fiscal bed. Now it needs to lie in it. And ultimately persuade Canadians that its fiscal choices were right.