Defining a role for the Canadian Armed Forces in humanitarian assistance and disaster relief: Christian Leuprecht and Peter Kasurak in the Hill Times 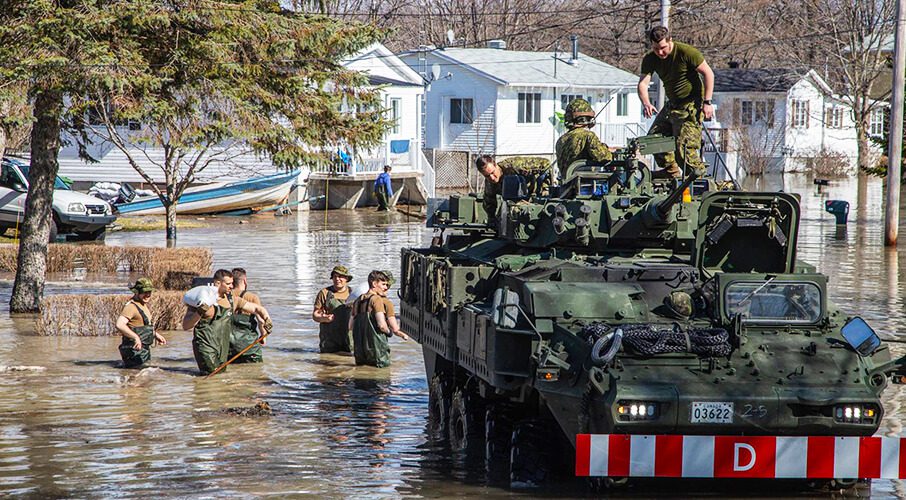 Overall, humanitarian assistance and disaster relief is a significant and growing demand on CAF resources—though it fits uneasily with the vision the CAF has of itself, write Christian Leuprecht and Peter Kasurak.

The COVID-19 pandemic has brought into focus the problematic nature of the Canadian Armed Forces’ (CAF) domestic role: for many weeks over 1,700 members of the CAF were on duty in long-term care homes while another 22,000 CAF members were put on stand-by.  Canada has become increasingly reliant on the CAF to respond to domestic emergencies, which are growing in frequency: 30 missions between 2011-2020 as opposed to 6 between 1990-2010.

Senior military officials have begun to express concern about the disruption to training and erosion of combat readiness and focus.  The pandemic deployment raises questions of just how big the Humanitarian Assistance and Disaster Relief (HADR) burden is and what the best role for the CAF would be.

A growing, but unpopular, role

However disruptive, current operations should be well within the capabilities of the CAF.

Doing this work has never been popular with the senior military who believe they have had to fight to maintain “combat capable” armed forces.  The Army Reserve is especially sensitive to domestic taskings which some see as the Regular Force treating them as second-class citizens.  Nevertheless, HADR has long been part of the CAF role in defence policy.

Overall, HADR is a significant and growing demand on CAF resources – though it fits uneasily with the vision the CAF has of itself.

Our analysis raises three problems that must be addressed.  First, how to address the moral hazard created by the federal government backstopping provinces that underinvest and then call prematurely for federal assistance.  The federal government’s best option is to incentivize provinces to plan for the consequences of climate change and create appropriate emergency response capabilities.

Third, how to surge general or semi-skilled labour in an emergency.  This requirement is especially disruptive to the services’ combat training and readiness.  If not the CAF, then what should the source of this labour be and what should be the federal role in maintaining it?  There are four basic models the federal government could follow.

The first is an alternative civilian organization.  However, without a dedicated ‘day job’ to occupy (most of its) idle time, an agency such as the US Federal Emergency Management Agency (FEMA) turns out to be quite inefficient: large, bureaucratic, expensive, and not all that agile.

The second is to mobilize volunteer and skilled labour. But this raises a host of legal issues.  Moreover, experiences with both the National COVID-19 Volunteer Recruit Campaign and the long-standing CANADEM International Civilian Response Corps suggest that the federal government lacks comparative advantage to manage volunteer resources.

The third is to incentivize modest emergency services organizations at the provincial or region level, akin to Australia’s State Emergency Services and Germany’s Technische Hilfswerk.  In contrast to provincial emergency management organizations, which have no operational capacity, emergency services organizations in other federations have a small management bureaucracy but maintain a large roster of skilled and general labour to surge on short notice and preposition select heavy equipment.  Since unskilled labour imposes the greatest burden on the CAF, this would seem like a more effective, sensible approach.

All things considered, the fourth – and best – option would be to reprioritize and slightly expand the CAF to support its domestic role, creating a capability of about 2,000 Regular and Reserve Forces soldiers to focus on improving infrastructure in remote First Nations communities.  This combined force would spend most of the year liaising, planning and preparing to deploy to the community in the summer – which can be postponed/rescheduled if they are called out to a flood or wildfire instead.

Such a dedicated domestic role has precedent: in the 1920s, 1930s and post-war period, the Royal Canadian Air Force was tasked with mapping and charting Canada.  Rather treating HADR as a disruptor, it would be better to build the domestic role into the CAF permanently.

Christian Leuprecht is class of 1965 Professor in Leadership at the Royal Military College, cross-appointed to Queen’s University, and Munk Senior Fellow at the Macdonald-Laurier Institute.  Peter Kasurak retired in 2007 after leading the defence and national security sections of the Office of the Auditor General of Canada. He holds a PhD in military and diplomatic history from Duke University.  A longer version of this piece is forthcoming in the Centre for International Governance Innovation’s “Security, Intelligence, and the Global Health Crisis” publication.