Why the Demise of the Cold War's INF Treaty Will Not Alter the Strategic Military Balance: New MLI Paper 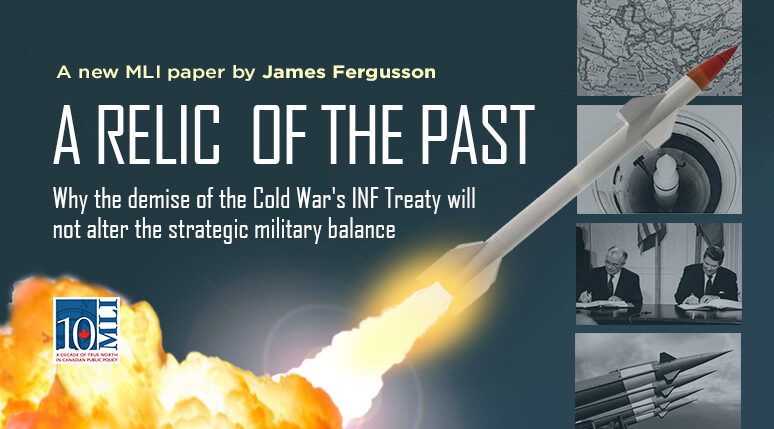 OTTAWA, ON (October 23, 2020): In August of 2019, the Intermediate-Range Nuclear Forces (INF) Treaty between Russia and the US ended, sparking widespread concern that the world was once again on the cusp of a nuclear arms race. However, despite over a year having passed, there is no sign of such a collapse in the nuclear non-proliferation framework.

To understand why this treaty ended but the status quo has endured, we must first understand why the treaty was signed and what gaps it left. In MLI’s newest paper titled “A Relic of the Past: Why the demise of the Cold War’s INF Treaty will not alter the strategic military balance,” James Fergusson argues that the defence and security implications of the INF Treaty’s demise are likely to be limited.

According to Fergusson, “arms control agreements have always been a symbol of the political conditions of their time. The INF Treaty was set in a different strategic, military, and political environment.”

“Nothing suggests that its absence per se will create major defence and security challenges for Europe and the world.”

Indeed, even when that the INF was signed in 1987, neither Moscow nor Washington were actually engaging in any kind of serious détente – the INF served more of a symbolic function. The treaty effectively barred both countries from deploying ground-based weapon systems that were already falling out of practical use and have since been replaced by more mobile and modern systems.

“What is often overlooked,” explains Fergusson, “is that the political, strategic, and military reality at the time largely negated the demand for nuclear INF systems; thus, neither side gave up anything essential in signing the treaty.”

The INF met its demise for several reasons, including the 2014 accusation from the US that Russia had violated the treaty. But even without alleged rule-breaking, the Cold War calculus that catalyzed the agreement has long since ended. Though relations remain cold, the US and Russia are no longer in a zero-sum standoff between two diametrically opposed systems.

Both countries have so far not taken significant steps to break out of INF limitations. It’s too early to know if this situation will continue. Importantly, however, both countries already deploy long-range air- and sea-based strike systems that, since they have always been excluded from the constraints of the INF Treaty, can hold at risk targets that were originally covered by INF ground-based weapon systems.

Moreover, the attention of the West is increasingly shifting toward the East – and, in that regard, the INF Treaty also had major gaps. In particular, it allowed China to continue to develop its ground-based intermediate-range weapon systems unimpeded. China is unlikely to engage in overt arms race behaviour.

Yet, as Fergusson concludes, “China’s emergence as a ‘near-peer’ competitor to the US and its passing of Russia in the global political hierarchy potentially provides the basis for a tacit agreement between Russia and the US not to deploy INF systems in the European theatre and restrict their deployments to Asia.”

Finally, Fergusson finds that the political environment is starkly different than in the 1980s. Back then, the lack of formal arms control treaties ignited protests and political disruptions which motivated politicians to sign the INF. By way of contrast, today there is next to no concerted effort to reintroduce the treaty, and Russia’s own actions (such as its aggression against Ukraine) have left little appetite for negotiating with Putin.

“Whether the age of arms control has come to an end remains to be seen,” writes Fergusson. “But, as in the Cold War, arms control in whatever future form is not a means to an end, per se, only an end driven by political means.”

To learn more about the INF Treaty and how its end is unlikely to alter the global balance of power, read the full paper here.

***
James Fergusson is the Deputy Director of the Centre for Defence and Security Studies and Professor in the Department of Political Studies at the University of Manitoba.