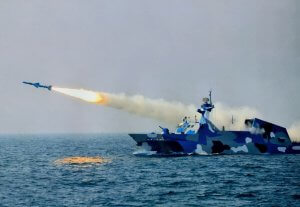 China’s embrace of innovation in its efforts to transform its military will prove a long-term challenge to the West, writes Preston Lim.

At the end of August, China’s second aircraft carrier sailed from its shipyard in Dalian, in northeastern China, to commence final sea trials. The 65,000-tonne vessel is China’s first domestically-built carrier and could be fully operational as early as October 2019.  Some have identified technological issues with the ship, but most analysts agree that the PLA Navy (PLAN) is entering a new era: one characterized by force projection rather than mere regional defence.

Many of those writers, while essentially correct, have missed an important point: the aircraft carrier is far from the most important tool in China’s growing armoury. This article applies the theory of disruptive innovation to examine some of the ways in which the Chinese are transforming naval warfare – most notably, through investment in anti-access/area denial (A2/AD) capabilities.

China’s military build-up – symbolized most boldly by the carrier construction program – is part and parcel of President Xi Jinping’s articulation of a new “Chinese Dream.” At the 19th Communist Party Congress, held in October 2017, Xi promised to achieve the “great rejuvenation of the Chinese nation,” with plans to boast a “world-class army by 2050.” To understand President Xi’s focus on the military, it is important to revisit China’s modern history.

President Xi and other Chinese leaders have tended to see China’s recent record as one of national humiliation. The 19th and 20th centuries were defined by foreign colonial intervention in Chinese domestic affairs, with calamity following calamity: the Opium Wars, the failed Boxer Rebellion, and the Sino-Japanese War, which became part of the Second World War. As late as 1996, the Chinese government was left helpless when American aircraft carriers sailed through the Taiwan Strait with impunity during a spat between China and Taiwan.

Now, the long “century of humiliation” is over. And despite slowing economic growth, caused only in part by the ongoing trade war with America, President Xi remains intent on building a Chinese dream undergirded at least in part by military muscle.

China’s military rejuvenation has, on one hand, come in the form of increased spending, with Beijing boasting a defence budget of $227 billion. Indeed, the sheer number of new naval platforms, with 18 ships commissioned in 2016 alone, is nothing short of incredible. Though naval analysts continue to debate whether or not the PLAN is a “blue-water navy” – i.e., capable of exercising “sea control at long ranges” – China’s force projection capabilities will only improve in coming years.

Yet perhaps a more important criterion of China’s growing military clout is investment in technological development. In other words, to focus on traditional terms of comparison, such as total defence outlays or number of aircraft carriers, would be to obscure a critical aspect of China’s military ascendance. While China has proven capable of domestically producing traditional weapons systems – the J-20 “Chengdu” fifth-generation stealth aircraft, for example, or the Type 001A aircraft carrier currently undergoing sea trials – its real genius lies in its embrace of disruptive innovation.

According to the theory of disruptive innovation, newcomers to a field can upstage incumbents by bringing about revolutionary upheaval of a system. One means of causing that upheaval is to develop new technology. During the Hundred Years’ War, the cheap English longbow made short work of French heavy cavalry; centuries later, during the Second World War, it became clear that glistening battleships stood little chance against enemy bombers.

Applied to the modern day, while China may spend less on defence in absolute terms than the Americans, investments in cheaper, innovative technology mean that Chinese spending is more cost-efficient. Most significantly, as a result of innovation in A2/AD capabilities, the Chinese military has made it risky for foreign warships to operate close to the Chinese coast or within the South China Sea.

China has in recent years developed an array of anti-aircraft and anti-ship missiles, which would render American operations in the South China Sea difficult in the event of hostilities. Chinese anti-ship ballistic missiles, such as the DF-21D or the DF-26, are capable of at least disabling (if not destroying) a super-carrier or its escorts. The recently-commissioned DF-26 has a range of 3000-4000 kilometers and can even reach as far away as US facilities on Guam, making it an ideal weapon to forestall American naval entry into the Western Pacific.

The Chinese have creatively deployed shorter-range anti-ship missiles that would reduce America’s ability to operate freely in the littoral zone. China has pushed out its front line of defence, for example, by constructing and then installing anti-ship missiles on artificial islands in the South China Sea. And by equipping Chinese fast-attack vessels, such as the Type 22 missile boat, with anti-ship missiles, the PLAN has expanded its offensive reach.

Furthermore, China has only strengthened its A2/AD capabilities by growing its submarine fleet. A 2018 Pentagon report noted that by 2020, the PLAN could boast a force of “between 69 and 78 submarines.” China has focused not only on building its fleet quantitatively, but also on fielding modern vessels. The PLAN already fields five nuclear-powered attack submarines and four nuclear-powered ballistic missile submarines. Its fleet of diesel-powered attack submarines now includes a number of more modern designs, including 13 Song-class vessels and 17 Yuan-class vessels. Both of these newer submarines are capable of deploying anti-ship cruise missiles, alongside their traditional torpedo arsenals. Chinese submarines could be deployed offensively or defensively, but are certainly well-equipped to fulfill an A2/AD role.

Anti-ship missiles and a growing submarine fleet are but the most conspicuous items on a long list of A2/AD competencies. The Chinese are developing lasers to disrupt enemy aerial operations, unmanned vehicles, and a range of other complementary capabilities. Such technologies will allow the Chinese military to at least partially offset American military dominance.

Of course, it is important not to overemphasize the efficacy of such weapons or to pretend that only China is deploying innovative weapons. Technology is not a cure-all and the Chinese military remains burdened by a lack of relevant operational experience. American troops remain better trained and equipped than their Chinese counterparts; moreover, the American military has derived a wealth of valuable warfighting lessons in the past decade alone.  Still, the possibility of even one anti-ship missile getting through, as well as the massive cost differential between an anti-ship missile and an aircraft carrier, means that China has found a potentially cost-effective way of blunting US naval superiority.

Responding to the Chinese missile threat means meeting innovation with innovation. The American military has already pioneered a repertoire of counter-A2/AD systems, including “long-range strike vehicles, hyper-sonic weapons…and submarine launched cruise missiles.” American allies have followed suit too. Royal Canadian Navy frigates, for example, are set to receive electric countermeasures systems – most notably, a system called RAMSES – that emit jamming signals to misdirect the flight path of anti-ship missiles.  At the same time, the US Navy has also placed heavy emphasis on allied cooperation and interoperability. Joint multinational exercises such as the biennial “Rim of the Pacific Exercise” (RIMPAC) will only increase in importance.

As China builds its military, Western analysts will need to pay attention to the right metrics. While China’s capital ships are certainly important, China’s embrace of disruptive innovation will prove far more consequential in the long term. To ensure continued relevance, the United States and its alliance partners will likewise need to prioritize continual and disruptive innovation.

Preston Lim is a graduate of the Schwarzman Scholars program and received his Master’s in Global Affairs from Tsinghua University.