Do Not Forget Lessons of the Molotov-Ribbentrop Pact: MLI Commentary by Garry Kasparov 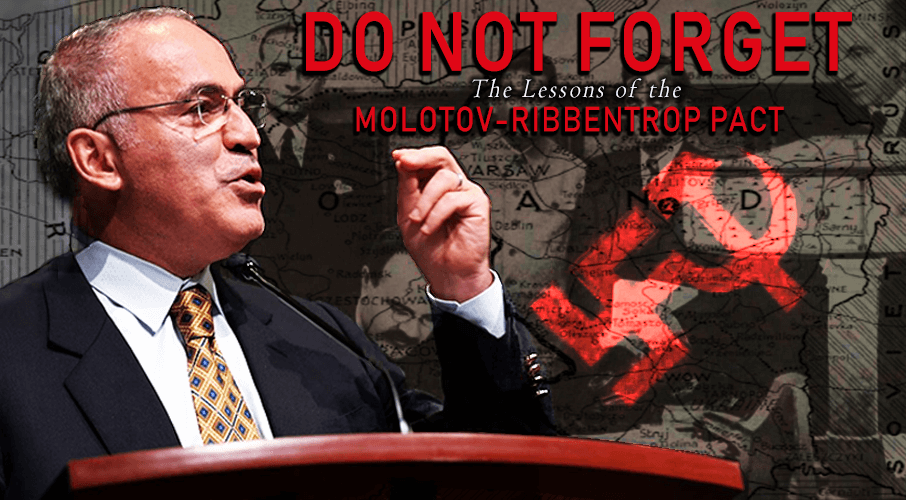 OTTAWA, ON (November 4, 2019): Just over 80 years ago, the Molotov-Ribbentrop Pact was signed by the Nazis and Soviets, formally establishing the criminal collusion between two dictatorial regimes that led to the Second World War. While too many have forgotten the significance of the Pact, the takeaways from this dark day in history are still relevant today.

In the Macdonald-Laurier Institute’s latest commentary paper titled Do Not Forget the Lessons of the Molotov-Ribbentrop Pact,  Russian democracy advocate and world-renowned chess champion Garry Kasparov makes the case that our current environment of disinformation and fake news hearkens back to August of 1939.

As the commentary explains, the very facts regarding the Pact are being distorted by Russian President Vladimir Putin as part of an effort to justify his invasion of Ukraine. By distorting history, Putin has been working to position himself as a successor in stature to Stalin, making excuses for Soviet brutality in an effort to condone his own conduct.

According to Kasparov, this campaign of historical revisionism and influence has resulted in growing authoritarian influence in the world. He argues that the lessons of the Molotov-Ribbentrop Pact are being largely forgotten by the West.

“There are new Molotov-Ribbentrop pacts going on all around us today, and they are taking place out in the open, not in secret,” writes Kasparov. “An axis of autocracy has developed, with cooperation between authoritarian regimes and their would-be imitators in the free world.”

This growing acceptance and ambivalence towards pro-Putin rhetoric, alongside an abandonment of “principle for profit,” is contributing to the erosion of global freedom. Kasparov argues that the lack of willingness to stop authoritarian incursions goes hand in hand with widespread historical revisionism.

“Amnesia and revisionism aren’t exclusive to Russia. Several initiatives to recognize the crimes and atrocities of Communism have failed to pass through the European Parliament. Why? Why is the swastika banned and reviled, but the hammer and sickle seen as a valid political symbol, or even as sentimental kitsch?”

In order to stymie the aggression coming from the Kremlin and other authoritarian regimes, Kasparov argues that there must be a will to use the West’s dominant position to push back against the belligerent behaviour of Putin and other bad actors.

“Let us see with clear eyes what is happening so that we may do what must be done. Engagement with Putin has failed; it has only spread his corruption and emboldened him,” writes Kasparov. “If you want to change Russia’s behaviour, you must threaten Putin’s grip on power in Russia.”

To do this, Kasparov recommends a number of different measures which Canada can lead on, including:

“It is all well and good to make the record clear on Molotov-Ribbentrop… especially on Stalin’s role as a protagonist in launching World War II,” Kasparov explains. “Let us use that lesson and call things as they are. Lies are lies. Murder is murder. Dictators are dictators. And just as we cannot allow history to be revised, we must not allow what is happening now, right in front of our eyes, to be distorted.”

To learn more about the lessons of the Molotov-Ribbentrop Pact and the threats posed by those who would seek to revise history, read the full commentary paper here.

Garry Kasparov came to international fame at the age of 22 as the youngest world chess champion in history in 1985. His famous matches against the IBM super-computer Deep Blue in 1996-97 were key to bringing artificial intelligence, and chess, into the mainstream. Kasparov was one of the first prominent Soviets to call for democratic and market reforms; In 2017, he founded the Renew Democracy Initiative, dedicated to promoting the principles of a free world.