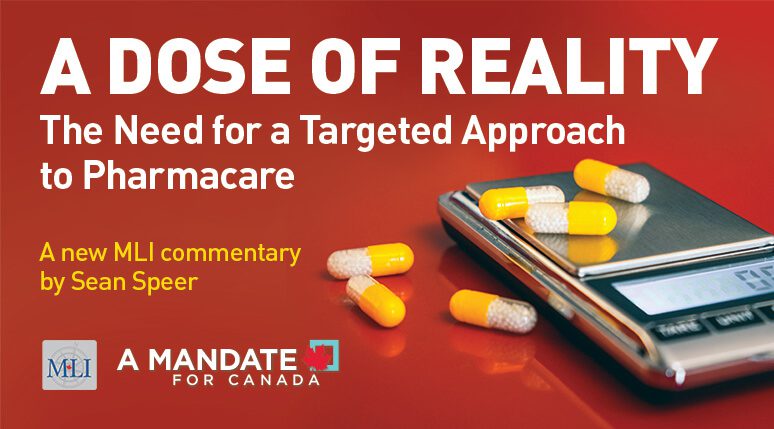 OTTAWA, ON (June 14, 2019): With a federal election approaching, it appears that one of the biggest issues will be whether Canada needs a national pharmacare system. The simmering debate boiled over with the release this week of the final report of the federal government's Advisory Council on the Implementation of National Pharmacare, chaired by Dr. Eric Hoskins.

But a new paper by MLI Munk Senior Fellow Sean Speer explains that the rush toward a single-payer system has skipped the important step of identifying just what problem we’re trying to solve. And a proper analysis of the challenges to universal drug coverage reveals that sweeping changes to Canadians’ drug coverage is not the answer.

The paper, titled “A Dose of Reality” is the first in a new series by the Macdonald-Laurier Institute tackling the biggest issues heading into the October federal election.

The Hoskins Panel report neglects the fact that Canada’s current mix of public and private drug insurance is achieving near universality in drug coverage already. Like the Hoskins report, Speer finds that the current model is generally working for at least 80 percent of Canadians. This does not mean that there is no room for improvement, as Speer’s paper observes.

But it is hardly a justification for radical change. Speer fears many of the current benefits would be lost if the federal government follows the Hoskins Panel’s recommendation and adopts sweeping changes to the current model. More targeted solutions are needed to better serve the smaller number of Canadians who currently cannot afford their medications or have inadequate coverage. This is the real problem.

"The Hoskins Panel would have Canadian governments simply wipe away what we have and start anew in order to better serve a small share of the population," said Speer. "We disagree. It makes eminently more sense to build on and improve the current model to help this cohort."

Who are these people who are currently not covered by a government or employer-provided drug plan?

A large share is neither poor nor old. They are also unlikely to live in a rural or remote community. Otherwise they would ostensibly be covered, as 23 percent of the population is, by provincial programs that target low-income people, seniors, or rural residents, such as Ontario’s Trillium Drug Program. Unlike another 66 percent of Canadians, our uninsured cohort does not have private drug coverage through an employer, a spouse or as an individual.

This cohort is generally working age and earning income that exceeds the means-testing thresholds for public programs, in fact 2.8 million (or roughly 80 percent) of the non-insured cohort fall into this self-employed category.

This does not mean policy-makers shouldn’t care about the group. But it might change how we think about the role of government and public policy.

Speer proposes “a major redesign of the federal Medical Expense Tax Credit (METC) as one means of closing the insurance gap and realizing the goal of universality” in drug coverage.

The current METC program is helpful but limited. The METC should be refundable, the thresholds should be reset, and the value should be higher. At a value of $5000 per family or $2500 per individual, you would be providing substantial public support for individuals and families to purchase private drug coverage at a total cost to the federal government of roughly $5 billion per year, and reducing some pressure on provincial and territorial budgets.

This could also help shift the insurance model over time from a work-based one to an individual based framework, reflecting current labour market trends.

Why not a single-payer national pharmacare system?:

Finally, according to Speer, the Hoskins Report’s assumption of $5 billion in savings from efficiencies in a pharmacare system is dubious. He argues that “a combination of bureaucratic inefficiency, political economy pressures, and limited government borrowing capacity are more likely to inflate the costs relative to the status quo than lower them over the long term.”

“We have come to the view that it would be a huge mistake to throw the baby out with the bathwater on this file,” writes Speer. “Single-payer pharmacare is the wrong answer to the right question. Its various flaws, including costs, drug access, and disruption for people would represent a net harm to drug coverage in Canada. We need to get this right.”