Doug Ford needs a lesson in how democracies avoid authoritarianism: Benjamin Perrin in the Washington Post 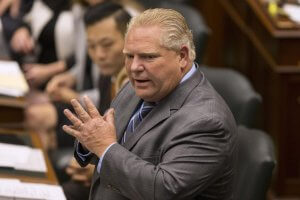 Premier Ford’s reasons for wanting to use the notwithstanding clause and stated intention to do so again on other issues is deeply troubling, writes Benjamin Perrin.

Ontario Premier Doug Ford’s government made history Sept. 12 when it introduced legislation purporting to override constitutional freedoms for the first time ever in the province. Ontario is not reacting to a terrorist attack, Ebola outbreak, armed insurrection or financial meltdown. Ford’s drastic move is about the number of politicians on Toronto’s city council. To paraphrase Henry Kissinger: the smaller the stakes, the more vicious the politics.

Ford has an acrimonious history as a Toronto city councilor. Soon after being elected premier, Ford’s government passed Bill 5, reducing the size of Toronto’s city council from 47 to 25 councilors in the middle of the municipal election. On Sept. 10, Justice Edward Belobaba of the Ontario Superior Court of Justice found that Bill 5 violates the freedom of expression of both candidates and voters as guaranteed under the Canadian Charter of Rights and Freedoms, and those infringements could not be justified. The judge called Bill 5 “unprecedented” for changing the rules of an election “in the middle of the game” without explanation.

Later that day, Ford announced an appeal of the decision. That should have been it. But, unfortunately, Ford didn’t end there. He called an “emergency” cabinet meeting and had the legislature recalled to reintroduce Bill 5 and invoke the “notwithstanding clause”.

Under the “notwithstanding clause” (Section 33 of the Charter), the federal Parliament or a provincial legislature can declare that legislation will apply “notwithstanding” fundamental freedoms, legal rights and equality rights. In other words, it allows these rights and freedoms to be overridden, such as freedom of religion, freedom of expression, the right not to be arbitrarily detained, the right to be presumed innocent until proven guilty, and so on. It’s a very controversial and extraordinary power that has the potential to be horrifically abused.

The notwithstanding clause was included in the Charter as part of a deal to bring all provinces, except Quebec, to sign onto the statement of constitutional rights and freedoms. It was meant as a last resort in truly exceptional circumstances. It could be a tempting legal device for political leaders whose agendas have been “thwarted” by the courts.

Despite much speculation about some significant court loses faced by then-Prime Minister Stephen Harper’s government, the notwithstanding clause was never used in almost a decade in office. Cooler heads prevailed in that era. We find ourselves in new territory with the emergence of a populist leader such as Ford who has revealed a disregard for the role of the courts in our democratic system.

Ford’s dash to the notwithstanding clause so early in his mandate and on such a banal piece of legislation is bizarre. His reasons for wanting to use it and stated intention to do so again on other issues, if the need arises, is deeply troubling.

“What’s extraordinary is a democratically elected government trying to be shut down by the courts. That is what concerns me more than anything. We live in a democracy,” Ford said at a news conference. “We are prepared to use Section 33 again in the future.”

“The people will be the judge and jury,” he said.

Ford’s definition of democracy leaves no place for an independent judiciary that plays a crucial role in interpreting and applying the constitution, and protecting individual rights and freedoms. It’s naked majoritarianism without any checks and balances.

It’s as if Ford and his allies who are actively assailing the judiciary have forgotten — or never really understood — centuries of hard-earned lessons that democracy is not about electing a king by another name. Individual rights and freedoms, enforced by an impartial and independent judiciary, are bulwarks against authoritarianism. This separation of powers provides vital limits on majority rule to protect individuals and minority groups of all kinds.

Defenders of Ford’s controversial move argue that Belobaba’s decision is flawed. That’s why we have an appeals process. Indeed, on Sept. 19 the Ontario Court of Appeal stayed Belobaba’s decision pending appeal, since it found there’s a strong likelihood it would be overturned. So, there was no reason or justification for Ford to resort to the notwithstanding clause. But this case has drawn him out into the open and revealed a disturbing style of governing — a willingness to rush headlong into overriding constitutional rights and freedoms to get his way. And there’s already litigation in the pipeline on other issues where he and the courts may well again collide.

Benjamin Perrin is a Munk Senior Fellow at the Macdonald-Laurier Institute and a professor at the Peter A. Allard School of Law at the University of British Columbia.