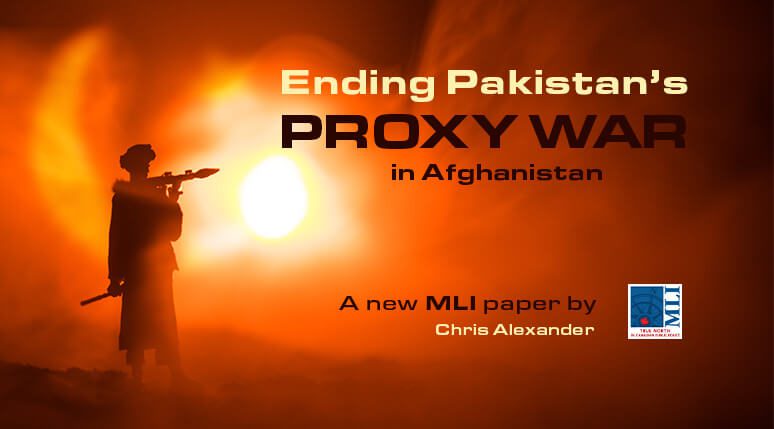 OTTAWA, ON (March 3, 2021): Alongside regimes in Russia, China and Iran, Pakistan deserves recognition as amongst the world’s greatest disruptors for its proxy war in Afghanistan. Many Canadians have lost their lives in pursuit of Afghanistan’s freedom and prosperity. Though the price was steep, Canada was a major contributor toward bringing greater stability to the country, strengthening a democratic government, empowering women and girls, and much more.

However, despite substantial efforts from the international community, Afghanistan remains mired in a worsening conflict – and these gains are increasingly under siege. In a new MLI paper titled “Ending Pakistan’s Proxy War in Afghanistan,” former Ambassador and Cabinet Minister Chris Alexander reveals the integral role of Pakistan’s Inter-Services Intelligence (ISI) as the principal and underlying cause of persistent war against Afghans and those who seek to help them.

Alexander argues that, instead of working to achieve stability under democratic institutions chosen by Afghans, Pakistan’s post-9/11 military leaders have “sheltered Osama Bin Laden and Al-Qaeda while working to scale up military and terrorist campaigns prosecuted by the Taliban’s Quetta Shura, the Haqqani Network, and other groups.”

Alexander reveals that the Taliban and their allies have received unstinting support from Pakistan’s military for decades. This state terror as statecraft has systematically resulted in the Taliban’s capacity to continue engaging in terrorist activities. As a result, “ISI’s covert proxy war has killed a total of about 124,000 people to date – more than half of them Taliban fighters and nearly one third Afghan civilians,” notes Alexander.

Those responsible for the continuation of Pakistan’s proxy war in Afghanistan have not been held to account. This has enabled the impunity enjoyed by Pakistan’s military leaders.  “The regional conflict – and its resolution – is no longer about Afghanistan and Pakistan alone. It is about the credibility of international institutions, including the UN and NATO,” writes Alexander. “It is also about the future of proxy war as an instrument of policy – at a time when Russia’s Putin, Turkey’s Erdogan, Iran’s Khamenei, and others are eager to mimic ISI impunity.”

Alexander makes several recommendations, including calling on Pakistan to end its covert proxy war at the UN, sanctioning officials responsible for supporting terrorist organizations, listing Pakistan as an official state sponsor of terrorism until it ends its proxy war, suspending coalition force reductions pending an unconditional ceasefire, convening genuine peace negotiations between Kabul and Islamabad, and much more.

“By acting together, we can create a new anchor of stability for the world in Afghanistan and Pakistan, the benefits of which will be felt for generations to come. [These] strategic recommendations are made in this spirit.” The paper makes it clear that the principal beneficiaries of peace will be the large and growing populations of both Afghanistan and Pakistan, whose future the conflict now threatens.

This paper also represents the launch of an MLI project titled “An enduring commitment: Canada and the future of Afghanistan,” which aims to highlight the challenges facing Afghanistan – a country that Canada has made a substantial investment in.

“Afghanistan should not be viewed as an isolated conflict or state,” says Senior Fellow and Director of MLI’s Indo-Pacific Program, Jonathan Berkshire Miller. “Chris Alexander’s important paper is a much-needed addition toward understanding the role that Pakistan has played in undermining stability in Afghanistan.”

According to Shuvaloy Majumdar, MLI Program Director and Munk Senior Fellow for Foreign Policy, “Chris Alexander’s paper brings to bear all his rich experiences as one of Canada’s most accomplished diplomats, a former Cabinet Member, and an exceptionally qualified expert on Afghanistan. It represents a seminal contribution.”

To better understand why Pakistan is engaging in a proxy war in Afghanistan, and what policy-makers can do to end it, read the full paper here. To learn more about MLI’s project on Afghanistan, subscribe to our mailing list.

Chris Alexander served for eighteen years as a Canadian diplomat, including as the first resident Canadian Ambassador to Afghanistan. In 2011, he published The Long Way Back: Afghanistan’s Quest for Peace, winner of the Huguenot Society of Canada Award. He was MP for Ajax-Pickering from 2011 to 2015, serving as Parliamentary Secretary for National Defence and Canada’s Minister of Citizenship and Immigration.